The analysis: This scene is a great example of what the journalist Barbara Ehrenreich calls “collective joy.” The blond kid in the front might be the most interesting. He’s got this great, complex display of emotion. On the one hand, he shows elements of rage: He’s tightening muscles around his mouth to bare his teeth, and the muscles around his eyes—the corrugator and orbicularis oculi muscles—seem to be contracting to make him wince and pull his eyebrows down. 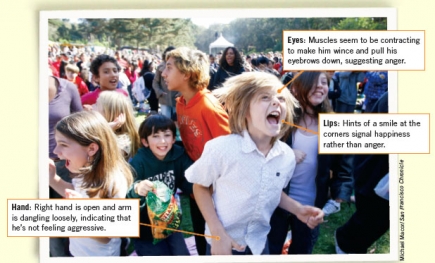 But at the same time, he is showing signs of real happiness: His head and his gaze are pointing up, his cheeks are raised, and he shows hints of a smile at the corners of his mouth, with the zygomatic major muscle pulling his lip corners up.

That zygomatic major muscle action confirms he’s happy, not angry, as does the fact that his jaw is dropped down low. If he was actually angry, his jaw would be clenched much tighter. Plus, we know that many animal species, including humans, have very tight posture when they’re feeling aggressive and getting ready to attack. In humans, our shoulders and fists tighten up and our bodies coil. But this kid’s showing the opposite pattern. His right hand is open and his arm is loosely dangling by his side.

There are evolutionary arguments for why forms of collective joy, especially dance, might mix delight and rage. Ehrenreich has argued that dance is a way of coordinating allies to prepare to defend themselves. Another idea is that dance is a cooperative way of turning potentially antisocial behavior, such as sexual inclinations or aggression, into something lighthearted and benign. It’s like children’s rough-and-tumble play: A lot of what they do looks like aggression, but it actually transforms aggressive tendencies into safe, playful routines.

Eyes: Muscles seem to be contracting to make him wince and pull his eyebrows down, suggesting anger.
Lips: Hints of a smile at the corners signal happiness rather than anger.
Hand: Right hand is open and arm is dangling loosely, indicating that he’s not feeling aggressive.