When we say that someone is “lovesick” or “dying of a broken heart,” we are making a connection between that person’s mental state and physical health.

Yet for centuries, Western medicine dismissed the notion that the mind and body were linked, and treated illness as a strictly physical affair. In recent years, however, scientific discoveries have sparked a new interest in the powerful ways by which people’s thoughts, feelings, and behavior affect their health and healing. 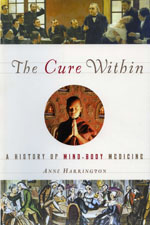 In The Cure Within, Harvard historian Anne Harrington examines the roots of mind-body medicine, exploring how today’s alternative treatments, such as mindfulness meditation, came into existence. She structures the book around six ideas of how the mind is involved in healing, focusing specifically on United States history since the 19th century.

For example, the first chapter, “The Power of Suggestion,” explores how charismatic authority figures can trigger changes in our bodies, such as when an exorcist “cures” an illness that springs from supposed demonic possession.

In later chapters, Harrington shows how we have increasingly used science to explain the connection between mind and body. She traces how disparate lines of research—such as psychoanalysis, meditation research, and social epidemiology—have interacted to shape a new kind of mind-body medicine.