Viktor Frankl once said, “Everything can be taken from a man or a woman but one thing: the last of human freedoms to choose one’s attitude in any given set of circumstances.”

Frankl came to this conclusion after experiencing life in a Nazi concentration camp and seeing small acts of humanity even in these most dire circumstances. He realized that humans had the potential to act morally even when the situation pressed upon them to do otherwise.

In journalist Eyal Press’ new book, Beautiful Souls: Saying No, Breaking Ranks, and Heeding the Voice of Conscience in Dark Times, we learn of individuals who held to their convictions and behaved with compassion in difficult circumstances. 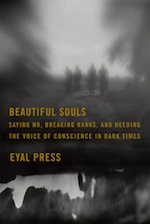 There is the story of a Swiss police captain who allowed Jews to cross into Switzerland during World War II, even after the government had forbid more migration from neighboring countries; the Serbian who saved many Croats during a roundup of civilians during Yugoslavia’s civil war; the Israeli soldier who refused to serve in the Occupied Territories. In each tale, an individual acted alone to defy injustice, even though he or she seemed an unlikely hero.

Press analyzes these stories to extract what motivates an ordinary citizen to act with conscience. He points to research that shows people are less inclined to act on injustice when they see others being complacent; but, when someone is face to face with a victim, they will intervene because of their emotional reaction to witnessing suffering.

In the case of the of Press’ heroes, most had a firm belief in the espoused moral values of their society—like tolerance of difference, community, or caring for others—and this conviction helped to motivate them. Some had learned compassion at the foot of their parents. But often it was their gut reaction in the moment that caused them to act.

After reading this book, I was reminded of another book I’d read recently: The Hunger Games, published in 2008 and released as a movie last month. Though clearly in another league than Press’ diligently researched book, The Hunger Games parallels its non-fiction counterpart in some interesting ways.

In The Hunger Games, a futuristic dystopian society called Panem (formally the US) is divided into a capitol that controls the country’s wealth and power, and the 12 districts surrounding it that house a half-starved, brutally policed population. In the districts, people slave to produce the raw materials that afford a luxurious lifestyle for those who live in the capitol.

Once a year, the rulers of the capital force the districts to participate in a spectacle called “The Hunger Games”—a sort of gladiator-meets-Survivor event in which one boy and girl randomly chosen from each district fights each other to the death—which is gleefully followed on TV by the capitol inhabitants. “The Hunger Games” serve to remind the districts of the failure of their past rebellions and to squelch dissent.

Just as in Press’ book, the heroes are ordinary people—a teenage girl named Katniss who volunteers to take her sister’s place in the “Hunger Games” tournament, and her fellow district 12 contestant, Peeta. During the game, both characters end up following their moral compass, at least to some degree. Peeta sacrifices himself to protect the person he loves; Katniss shows compassion for other contestants, thereby endangering herself and earning the wrath of the capitol.

Unwittingly, their defiance ends up sparking a revolution in the districts that eventually overthrows the government of Panem.

Of course, the acts of every day heroes in real life don’t always end up with such positive results. In fact, many in Press’ book suffered by losing their jobs and facing public rebuke.

But at least both books highlight the importance of avoiding complacency in the face of evil. As Press writes, “In a world governed by large, impersonal forces, where the link between cause and effect is increasingly unclear, individuals thrust into compromising situations are rarely at a loss for opportunities to disavow responsibility,” so much so that when one acts against this trend, it seems heroic.

His message—and that of The Hunger Games, for that matter—is that individuals can and should act when faced with moral dilemmas and not wait for someone else to step in.

I doubt teens will read Press’ book and find inspiration from its real-life heroes. But it’s heartening to see how much they have taken to The Hunger Games. Perhaps they will be inspired to look more critically at injustice in their own lives and take action.

After all, research has found that if even one teen bystander says “no” to bullying when they witness it, it will stop the bullying from happening. In real life, even small acts of conscience can have tremendous resonance and prevent suffering. Sometimes, as Katniss and Peeta found, they can even save the world.