This Mother’s Day is going to be a doozy for a lotta moms out there. 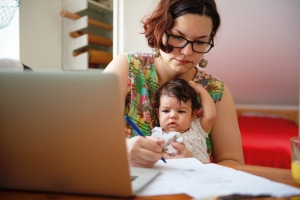 I have been flooded with requests from working moms for strategies to sustain their own well-being while trying to keep their children from slipping into depression and their careers afloat.

“I’m grateful to be working from home, but I’ve taken on way more of the housework and homeschooling than my husband has,” a client recently complained to me. “And I’m the one my kids come to to have their meltdowns. I’ve never been so exhausted. Or angry with my husband.” I know she is not alone; I imagine the resentment is reaching record highs this year.

I know from personal experience that resentment can show up on Mother’s Day as an expectation that our motherly sacrifice and hard work will be acknowledged and celebrated in a way that makes up for the unfairness of those sacrifices.

But this, of course, is an impossible fantasy. Even the greatest Mother’s Day brunch, complete with presents and flowers and heartfelt speeches (it’s a fantasy, after all), can’t fill the holes in our relationships that are created when mothers sacrifice their own well-being to take care of their families.

When my friend Monica and her husband married, she made more money than him (she was even, at one point, his boss). But by the time their third child came along, she’d taken a series of pay cuts in exchange for greater flexibility and more time at home. Her husband started doing less and less child care and housework. Even before the pandemic, she rarely had a moment to herself, while he has always taken the evenings and weekends off to “recharge.”

Now, even though they are both currently working from home and her husband’s job has turned out to be quite flexible, he is not helping out more. His work is considered more important than Monica’s because he makes more money. Ergo, he gets to focus on his work while she manages their three kids and the household and her own business. He recharges on the weekends and plays catch with their oldest son; she vacuums and mediates the kids’ bickering. For Monica, there is no time to relax.

Need I point out that this is unfair? Earning more money does not entitle a partner to a more joyful or restful life. Most women simply can’t earn as much as men. Mothers tend to take a financial hit when they have children; fathers do not. Women earn less than men in nearly every occupation. On average, they make only 82 cents for every dollar earned by men. In middle-skill jobs, those that require some college, workers in jobs mainly done by women earn only 66 percent of what workers earn in jobs that are mainly done by men.

This, obviously, is a vicious cycle. Earning less money (which in and of itself isn’t fair) means that mothers’ careers are less important than their husbands’, and therefore that they are expected to do more unpaid labor than their partners. It’s clear whom this arrangement serves, and it isn’t women.

Now, I know that there are a lot of mothers who do more unpaid labor at home than their husbands because they work outside the home less or not at all—and the arrangement feels fair. And I know there are a lot of couples who split the unpaid family work equally, or in ways that they both feel is fair.

This post is not about those couples. Nor is this post for women who want to take on extra unpaid labor so that their husbands have more time than they do to rest and recharge.

It’s for mothers in heterosexual partnerships who feel like they were dealt an unfair hand—one that has been amplified by school closures and endless time at home. This post is for the women who’ve said to me recently, “This is not what I signed up for when I married him. I thought we were going to be equal partners.”

Many moms renegotiate a raw deal through divorce: Dads with 50 percent custody suddenly find themselves doing all of their own housework and half the labor related to having kids. Divorced moms find themselves with uninterrupted time to rest, restore, and tend to their careers, while the kids are with their dad.

But divorce is a painful—and expensive—way to split unpaid family labor fairly. Doubling the amount of household labor that needs to be done is inefficient and heartbreaking.

Often, a better option is to renegotiate the terms of the marriage related to the division of labor. I can’t imagine a better time to do so than now. Dads who are working from home can plainly see how much unpaid work their wives do on behalf of their families. As old structures crumble around us, I hope the unfair division of labor at home is one of them.

10 steps to renegotiating a bad deal

No savvy businessperson will enter into a partnership without negotiating the terms of the deal. Marriage is a partnership; clear communication about roles and responsibilities is essential. When anger and resentments build in any partnership, it’s a sign that the partnership is in danger.

Renegotiation is always a possibility. I’ve drawn on the work of Harvard Business School professors and negotiation experts Deepak Malhotra (author of Negotiating the Impossible) and Max Bazerman (author of Better, Not Perfect) to outline some best practices when a lot is at stake.

1. Start by looking inward, to get really clear about what you need. Notice what ticks you off; anger is often a symptom of an unmet need. If you feel resentful whenever you see your husband reading on the couch, you probably need more time to relax.

2. Question your limiting beliefs. “I don’t get to decompress after work like my husband does,” a mom recently said to me. Why not? Who made that rule? What would happen if you were better rested or if you did less housework?

3. Set your assumptions—and fears—aside for now. Sometimes we don’t ask important questions because we are afraid of the answers. Does your husband really think his well-being is more important than yours? You won’t know until you ask, and you might be surprised by the answer. Once we know the truth of a situation, we can better deal with it.

4. Consider what you are willing to give up, or where you’ll lower your expectations. It can be hard to let someone else take on a task or a role you’ve been playing in the family if you fear they won’t do it as well as you. If you’ve been in charge of the meals, for example, consider that you’ve actually been practicing skills like meal planning and cooking. You’ve gotten good at them. Are you willing to trade having a task done your way for more time to do something else? Also: What if you weren’t the go-to person in your household for something? What if your partner does it better? Are you willing to relinquish control?

5. Begin the conversation by telling your partner how you feel. The goal is to be seen and heard in your marriage; this won’t happen if you come at him with guns blazing. Try to use specific feeling words rather than judgments or accusations. For example, DO say: “I feel so tired all the time. I want more than anything to just unwind and read a book.” DON’T say: “You do LITERALLY NOTHING around here compared to me.”

6. Agree on the larger goal, which is to arrive at a sustainable division of labor that feels fair to both of you. Research clearly shows that a perception of unfairness hurts both the marriage and the individuals in it—husbands as well as wives. When one person in a couple is dissatisfied about the division of labor in their household, the marriage as a whole suffers.

7. Negotiate as an equal partner. Even if your husband makes more money than you, or seems to have more power, negotiate as his equal. He can’t have your family the way it is without you. If your husband is making a demand of you that he would not make of an equal (say, if you were making the same amount of money he was), call him out on it. Remember: The unfair expectation that women should sacrifice their well-being for their families or otherwise do an unequal share of unpaid family labor is being renegotiated.

9. Find out what’s holding him back. It might be fear that you’ll criticize him or that he won’t be able to go out with his friends anymore. He might feel that you’ve been too controlling. Do not defend your position. Listen to his fears and complaints so that you can solve for them moving forward.

10. Find opportunity in your partner’s needs. Once you know what he wants and what he’s worried about, together you can find something that feels fair to you both, rather than dismissing the partnership as unworkable. Instead of thinking, How can I avoid having to accept this? Think: What have I learned about my husband’s needs? How can we meet his needs while also meeting mine?

Right now, whether they realize it consciously or not, many dads are benefitting from the gender wage gap. When your wife earns less money than you do, it can be easy to believe your own work is more important or to assume it’s fair to expect her to run the household and to contribute to the family financially.

Which is why courageous conversations can change the world. When it no longer serves men for women to be paid less, more will join forces with those who are already working hard to close the gender pay gap. Personally, I can’t imagine a better Mother’s Day present than that.