“The principle of compassion lies at the heart of all religious, ethical, and spiritual traditions.”

So begins the Charter for Compassion, four paragraphs that serve as a global plea to turn away from hatred, intolerance, and violence, and to embrace a more compassionate life. 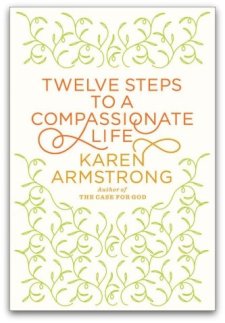 The Charter was developed with input from thousands of people worldwide, but it was originally the brainchild of the renowned religious scholar Karen Armstrong, who set the Charter in motion with a $100,000 prize she won from the TED foundation in 2008. Since the document was first published in 2009, it has been circulated worldwide, receiving more than 67,000 signatures (and counting) endorsing its message “to restore compassion to the centre of morality” and “to cultivate an informed empathy with the suffering of all human beings—even those regarded as enemies.”

Now Armstrong has taken this message a step further with the publication of her most recent book, Twelve Steps to a Compassionate Life. Though the title makes it sound like a self-help book, it reads more like a comprehensive history of compassion’s place in religious philosophy. Drawing on the texts of Confucianism, Christianity, Judaism, Hinduism, Buddhism, and Islam, Armstrong shows how each tradition grew out of the same historic circumstance: societies plagued by violence and greed needing to find a path away from self-destruction. The fact that one finds variations on the Golden Rule in each sacred text is no accident, according to Armstrong.

“These traditions,” she writes, “agree that compassion is natural to human beings, that it is the fulfillment of human nature, and that, in calling us to set ego aside in a consistently empathic consideration of others, it can introduce us to a dimension of existence that transcends our normal self-bound state.”

Armstrong argues that anyone can become more compassionate, and much of the book is devoted to suggesting how. She describes the building blocks of compassion—including empathy, mindfulness, action to relieve the suffering of others, and taking others’ perspectives—and challenges readers to begin applying these practices to the way they relate to themselves, their families, their communities, and even enemy nations.

For example, in a chapter titled “How Should We Speak to One Another?” she writes that when we “make an effort to hear the pain or fear that surfaces in body language, tone of voice, and choice of imagery,” we can better understand the anger of our enemies.

Though she writes from a religious historian’s perspective, and sprinkles passages from religious texts throughout the book, much of what she writes also has a basis in psychology and neuroscience research. While not denying the darker sides of human nature—“There is no doubt that in the deepest recess of their minds, men and women are indeed ruthlessly selfish”—Armstrong cites research on the brain that suggests the human neocortex has evolved to make us more self-aware, counterbalancing our more “primitive” brain centers, which evolved for survival. These newer brain functions allow humans to put aside selfish needs and act empathically and altruistically. She suggests that cultivating our powers of reason will help us overcome age-old instincts toward rejecting those who seem different from us.

To some this message may seem naïve, but Armstrong makes clear that compassion isn’t just a lofty idea; it’s desperately needed in our world, and it takes real effort to cultivate. She consistently challenges her readers to make peace-building a personal quest.

For example, in her chapter on empathy, she suggests that we use mindfulness to understand negative emotions like hatred. She prompts us to consider why we might harbor negative feelings toward someone else, asking, “Does she threaten your interests, get in your way, or behave in a manner that makes you think less well of yourself?” Her goal is not to put a smiley face on hostility but to root out its causes, and transform it.

Indeed, Armstrong consistently makes the reader see the practical necessity and political urgency of fostering a more compassionate world. She urges us to take responsibility for embracing our compassionate natures and nurturing our better selves in order to stop hatred, violence, and injustice around the world.

“In our global village, everybody is our neighbor, and it is essential to make allies of our enemies,” she writes. “In the last resort, this kind of ‘love’ and ‘concern for everybody’ will serve our best interest better than short-sighted and self-serving policies.”

Thanks for this great review, Jill. Karen’s book provides a great focal point for reading groups to discuss the twelve steps and to build a regular compassion practice. For anyone interested in starting a reading group, there is a Twelve Steps to a Compassionate Life Reading Groups Organizer’s Guide and other resources available here: http://charterforcompassion.org/learn/readinggroups

Roselle, Thanks for providing this link. It sounds like a
great way for readers to deepen their understanding
of the book and apply its message to their own lives.

Thanks for this great review

Thanks for this great review ..
I’m just not agreeing with all points ..
but in general .. that’s so helpful