A new study published in the journal 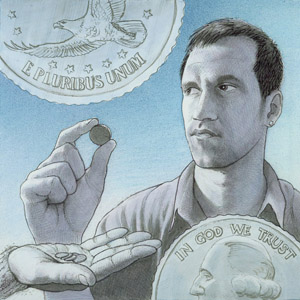 University of British Columbia psychologist Ara Norenzayan and psychology doctoral student Azim Shariff divided 125 participants into three groups. In the first group, researchers asked participants to unscramble sentences that contained words like spirit, God, and sacred. The second group played the same word game, but with non-religious content. The third played the game with words like court, civic, jury, and police—thereby priming them with thoughts of secular moral authority.

Each participant then was given 10 one-dollar coins and asked to make a decision about how much to keep and how much of the rest to share with someone else. The results: The group primed with religious words offered to share an average of $4.56 with another person; the group primed with secular words shared $4.44; and those who were not primed with any moral thoughts at all shared only $2.56. The researchers saw the 12-cent difference between the religious and secular groups as negligible, but they were struck by the two-dollar gap between those groups and the third group.

Shariff says their study suggests people will behave more altruistically when they’re reminded of higher moral ideals, but he stresses that faith in God is optional when it comes to motivating people to share what they have. “In our history, we’ve developed a lot of cultural institutions designed to reign in our selfish behavior,” says Shariff. “One of the earliest and most effective ones, we believe, was religion. But at this point, that’s certainly not the only thing that does it.”