In his 1651 book Leviathan, English thinker Thomas Hobbes argued that humans are warlike by nature. Today, many people concur. In a recent survey of college students in Connecticut and Florida, approximately half of them agreed with the statement that “war is an intrinsic part of human nature.” In a New York Times column last year, David Brooks opined that our species was born violent. “People in hunter-gatherer societies were deadly warriors,” he writes, “not sexually liberated pacifists.”

Are they right? Even studies that purport to show that war is pervasive also demonstrate that it is not universal. In a 1992 cross-cultural study of warfare, anthropologists Carol and Melvin Ember reported that warfare is “absent or rare” in 28 percent of the 186 societies in their sample. But when they separated out societies that were not pacified by colonial governments or foreign occupation, the Embers found warfare was absent or rare in only nine percent of the sample. While not all societies engage in war, according to this study, the vast majority do. 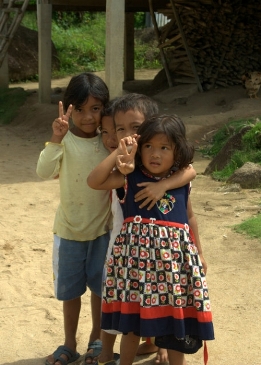 The Semai people of Malaysia have a long history of nonviolent conflict resolution. © Lim Eng Hoo

But the story is not as simple as it seems. The Embers defined war so broadly as to encompass feuding and revenge killings undertaken by more than one person, which creates curious discrepancies between their results and direct observation by other researchers. For example, their definition of war led the Embers to report that the Andaman Islanders warred “every year.” But Alfred Radcliffe-Brown, who conducted fieldwork among the Andamanese, writes that “fighting on a large scale seems to have been unknown amongst the Andamanese.”

Try this thought experiment: When you read that a given culture makes war every year, what mental image do you form? I’ll wager my paycheck that the words make war immediately bring to mind substantially more carnage than the ambushing of a single person. Is a riot a war? Is it war when bandits rob highway travelers? Defining war so broadly as to encompass a plethora of individual and group conflict behaviors—murder, robbery-homicide, revenge killings—can make it easier to claim that war is universal.

Lumping all sorts of violence together under the label “war” can bolster a questionable view of human nature, one that sees humans as inherently prone to mass slaughter. Therefore, defining war realistically is not just a matter of quibbling over semantics; it can determine how we perceive the human species.

I have adopted a more common-sense definition of war, first proposed by legal scholar Roy Prosterman: a group activity taking place between communities that has as its purpose the death and serious injury of multiple nonspecific people in the other community. With this definition in mind, I compiled a list of cultures that were non-warring. I looked for direct ethnographic statements indicating that a culture lacks war, that a people do not engage in warfare, that the members of a society respond to threats from other groups by moving elsewhere rather than fighting, and so on.

After searching the worldwide ethnographic literature for several months, I was able to locate 74 societies that are clearly non-warring. The Semai of Malaysia are a good example. Nonviolence characterizes daily life. They do not war and they do not feud. Even when confronted with slave-raiders in the past, their response was to flee into the forest. The Mardu of Australia are another example. Anthropologist Robert Tonkinson observes that “peaceful intergroup relations are imperative for long-term survival. . . . The Mardu have no word for either ‘feud’ or ‘warfare,’” and such forms of group violence are totally lacking there.

The non-warring societies list is far from exhaustive. It doesn’t, for example, include pacifist “enclave societies”—groups existing within larger societies—like the Amish or the Quakers. The list also excludes nations that have avoided warfare for long periods of time. Iceland has been at peace for more than seven centuries. Sweden has not been to war in more than 170 years. Costa Rica, a nation surrounded by violent instability, abolished its military after World War II.

Even omitting these societies, both my list and the list of peaceful cultures found by the Embers point to the same conclusion: Not all societies make war. These findings debunk the belief that war is intrinsic to humankind.

Our daily observations may seem to contradict the idea that peacefulness predominates in human affairs, especially when we have become accustomed to Hollywood films and daily newscasts that depict unrelenting violence. In actuality, the vast majority of people on the planet awake on a typical morning and live a violence-free day—and this experience generally continues day after day.

We may never be able to eliminate violence between individuals, but the evidence shows that war—that is to say, lethal violence carried on by one community against another—is certainly not inevitable or even normal. As illustrated by the planned creation of the European Union, humans can eliminate the threat of war by designing higher levels of democratic government, complete with built-in conflict management procedures. Although more complicated, the same process could be accomplished on a global level. To argue otherwise is to belittle human ingenuity.