The premise of this book may seem familiar to some readers: that conflict, whether between spouses or nations, begins when we stigmatize and dehumanize those with whom we disagree.

But The Anatomy of Peace takes an original approach to making this point. It tells the story of Lou, the father of a drug-addicted teenage boy, who reluctantly attends a workshop for parents of troubled teens. Lou enters the workshop assuming no responsibility for his family’s problems, attributing all blame to his son. The workshop leaders—a Palestinian and an Israeli—teach Lou and the other parents how to help their children by first changing their own attitudes and behaviors. They demonstrate that treating others humanely can resolve conflict better than direct confrontation, and they use the conflicts between the parents and their children, between the spouses, and even between workshop participants themselves to prove their point. 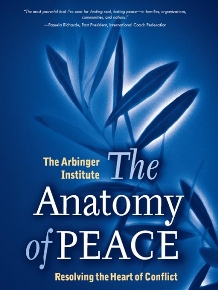 Though the workshop depicted in the book is fictional, it feels authentic. In fact, it is based on hundreds of actual workshops conducted by the Arbinger Institute—a consulting firm specializing in conflict resolution. The book was written by Jim Ferrell, Arbinger’s managing director, and Ferrell’s real-world experience has clearly informed his writing. One of the book’s strengths is that it doesn’t assume transformation is easy, and indeed, it is not easy for Lou. A crisis at Lou’s workplace keeps him on the phone between workshop sessions and provides another interpersonal problem for him to solve. As conflicts escalate around him, the workshop prompts Lou to re-evaluate his attitudes and take more responsibility for solving the problems he faces. When he tentatively calls a mutinous employee to make amends, he is met with hostility, and the reader sympathizes with Lou’s confusion and disappointment. But as Lou perseveres, the reader is subtly inspired to do the same.

The book offers a realistic portrayal of conflict and is prescriptive without being preachy. It is difficult to read The Anatomy of Peace and not recognize the role we all play in perpetuating conflict. One can’t help but fantasize that, somehow, the book could become required reading for world leaders. But of course, as this book so ably demonstrates, it is much easier to expect change from others than to work on transforming oneself.