In the months leading up to birth, a pregnant woman begins to read about childrearing, including a book called Attachment Parenting by pediatrician William Sears and registered nurse Martha Sears. They advocate for a collection of seven practices they call the Baby Bs: “birth bonding, breastfeeding, baby-wearing, bedding close to the baby, belief in the baby’s cry, balance and boundaries, and beware of baby trainers.” 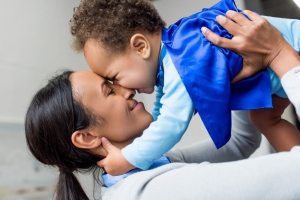 This article is excerpted from a longer article on Diana Divecha's blog, developmentalscience.com.

The pregnant woman finds their ideas compelling, and so decides to embrace this style of “attachment parenting.” But nothing goes according to plan. She begins delivery at home with a midwife, but when the labor doesn’t proceed, she’s taken to the hospital and given a Caesarean section. Influenced by Attachment Parenting, she worries that she has missed a critical bonding experience with her baby. Six weeks later, the mother develops a severe breast infection and reluctantly switches to formula. “Make sure you find some other way to bond with your baby,” her pediatrician cautions, adding to her distress. At night, the mother pulls the baby from his crib into her bed—even though it makes the baby cry.

Pretty soon, no one is happy—and the new mother wonders if her child is on the road to insecurity and anxiety.

All of these experiences are real; they’ve happened to mothers I know. And as a developmental psychologist, I know this tension between the ideal and the reality is based on a misunderstanding. Home birth, breastfeeding, and co-sleeping all have benefits—but none of them is related to a baby’s secure attachment with her caregiver, nor are they predictive of a baby’s future mental health and development. Simply put, a secure attachment—which does lead to positive child outcomes—is not the same thing as the philosophy called attachment parenting.

What is the scientific view of attachment?

The term attachment parenting was coined by Sears and Sears to refer to a parenting approach that emphasizes responding sensitively to the needs of babies and children. Many of their ideas come from parenting their own eight children, as well as from their pediatric practice; some are from anthropologists’ observations of indigenous childrearing practices (thought to be more “natural”); and some (like emotional responsiveness) are consistent with research findings.

Many parents, myself included, have welcomed the Sears’ guidance for creating warm, loving relationships, especially in contrast to earlier parenting approaches that were more strict, cold, or distant.

The implication, though—liberally strewn throughout the Sears’ writing and the precepts of the related international attachment parenting movement—is that the Baby Bs lead to a secure attachment, which is a specific psychological concept based on 60 years of research. Here we come to the problem: their use of the word attachment and the confusion it creates with the scientific notion of attachment theory.

Attachment theory has its roots in the work of an English psychiatrist, John Bowlby, who in the 1930s worked with children with emotional problems. He noticed that the troubled children in his care were deprived of affection and had disturbed or nonexistent caregiving. He came to believe that a primary caregiver served as a kind of “psychic organizer” to the child, and that the child needed this warm, intimate influence to develop successfully.

According to Bowlby, babies form a “small hierarchy of attachments”: The number has to be small for the baby to learn relevant emotional information, but multiples offer the safety of backups. And it’s a hierarchy for safety, too—in danger, there’s no time to think, so the baby can automatically turn to the person already determined to be the reliable comfort.

In the 1950s, Mary Ainsworth joined Bowlby in England. A decade later, back in the United States, she began to diagnose different kinds of relationship patterns between children and their mothers in the second year of life, based on how babies respond to separations and reunions. When babies have a secure attachment, they play and explore freely from the “secure base” of their mother’s presence. When the mother leaves, the baby often becomes distressed, especially when a stranger is nearby. When the mother returns, the baby expresses joy, sometimes from a distance and sometimes reaching to be picked up and held. (Babies vary, depending on their personality and temperament, even within a secure attachment).

Though early researchers studied mothers, current research shows that fathers, co-parents, grandparents, babysitters, and even older siblings can be significant attachment figures. Caregivers who foster a secure attachment are responsive, warm, loving, and emotionally available, and as a result babies grow to be confident in the caregiver’s ability to handle feelings. The babies feel free to express their positive and negative feelings openly and don’t develop defenses against the unpleasant ones.

Why the confusion about a secure attachment?

The Sears’ idea of attachment parenting is not well defined—and certainly has not been scientifically linked to a secure attachment outcome. And this confusion can sow guilt, worry, and misdirection in parents, who (understandably) are not aware of the distinction.

“Attachment [in the scientific sense] is a relationship in the service of a baby’s emotion regulation and exploration,” explains Alan Sroufe, a developmental psychologist at the Institute for Child Development at the University of Minnesota, where he and his colleagues have studied the attachment relationship for over 40 years. “It is the deep, abiding confidence a baby has in the availability and responsiveness of the caregiver.”

A secure attachment has at least three functions:

“Attachment is not a set of tricks,” continues Sroufe. “These [attachment parenting principles] are all fine things, but they’re not the essential things. There is no evidence that they are predictive of a secure attachment.”

Constant contact, too, can be misunderstood. Certainly, skin-to-skin contact, close physical touch, holding, and carrying are good for infants and can even reduce crying. But again, what matters for attachment is the caregiver’s attunement. Are they stressed or calm? Checked out or engaged? Are they reading the baby’s signals?

Attachment parenting advises emotional responsiveness, and this practice aligns best with scientific attachment theory. Babies grow best when their feelings are taken seriously. But well-meaning parents can overdo it, believing they need to meet the child’s every request, which can be exhausting and counterproductive. In contrast, research on secure attachments shows that, in the flow of everyday life, misattunements happen about 70 percent of the time!

What is important, researchers say, is that the baby develops a generalized trust that their caregiver will respond and meet their needs, or that when mismatches occur, the caregiver will repair them. This flow of attunements, mismatches, and repairs offers the optimal amount of connection and stress for a baby to develop both confidence and coping skills.

“There’s a difference between a ‘tight’ connection and a secure attachment,” Sroufe explains. “A tight attachment—together all the time—might actually be an anxious attachment.”

The neurobiology of attachment

“Attachment theory is essentially a theory of regulation,” explains Allan Schore, a developmental neuroscientist in the Department of Psychiatry at the UCLA David Geffen School of Medicine.

The areas of the brain that process emotional and social information begin to differentiate in the last trimester in-utero (whereas the more “intellectual” regions pick up in the second year of life). By birth, the amygdala, hypothalamus, insula, cingulate cortex, and orbitofrontal cortex—regions important for emotion processing—are present, but the connections among these areas develop in specific patterns over the first years of life. That’s where input from the primary relationship is crucial, organizing the hierarchical circuitry that will process, communicate, and regulate social and emotional information. Synaptic connections are pruned, and epigenetic processes modify the expression of genes that regulate stress, depending on input from the environment.

Parents use their own empathy, perspective taking, inference, and intuition to discern the needs of the baby. And the behaviors that parents are inclined to do naturally, like eye contact and face-to-face interaction, baby-talking and holding, are exactly the ones shown to grow the neural regions in the baby that influence emotional life. It is through a “right-brain-to-right-brain” reading of each other that the parent and child synchronize their energy, emotions, and communication.

“What a primary caregiver is doing, in being with the child,” explains Schore, “is allowing the child to feel and identify in his own body these different emotional states. By having a caregiver simply ‘be with’ him while he feels emotions and has experiences, the baby learns how to be,” Schore says.

And it’s not just about regulating stress. Supporting positive emotional states is equally important to creating a “background state of well-being.” If the caregiver’s emotions are too high, the stimulation could be intrusive to the baby, Schore explains. Too low, and the baby’s “background state” settles at a low or possibly depressive emotional baseline. Just right, from the baby’s point of view, is best.

Even then, there’s a lot of leeway. As Schore says:

Insecure attachments aren’t created just by a caregiver’s inattention or missteps. They also come from a failure to repair ruptures. Maybe the caregiver is coming in too fast and needs to back off, or maybe the caregiver hasn’t responded and needs to show the baby that she’s there. Either way, repair is possible, and it works. Stress is a part of life, and what we’re trying to do here is to set up a system by which the baby can learn how to cope with stress.

How important is attachment?

“Nothing is more important than the attachment relationship,” says Sroufe, who, together with colleagues, ran a series of landmark studies to discover the long-term impact of a secure attachment.

Over a 35-year period, the Minnesota Longitudinal Study of Risk and Adaptation (MLSRA) revealed that the quality of the early attachment reverberated well into later childhood, adolescence, and adulthood, even when temperament and social class were accounted for.

One of the most important (and paradoxical) findings was that a secure attachment early in life led to greater independence later, whereas an insecure attachment led children to be more dependent later in life.

The MLSRA studies showed that children with a secure attachment history were more likely to develop:

But attachment is not destiny; it depends on what else comes along. A poor start in life, for example, can be repaired in a subsequent relationship with a good mentor, a healthy romance, or constructive therapy.

As for my new-mother friends, they’re bonding successfully with their babies, welcoming and enjoying the moments when connection happens. And if you’re concerned about bonding with your own baby, rest assured that you’ll have some help—from your baby. Because regardless of their individual personalities—whether they cry a lot or sleep very little, whether they’re breastfed or bottle-fed—babies invite adults in with their wide-open gaze, their milky scent, and their tiny fingers that curl around your big ones. They let you know what they need.

Before you know it, they are lighting you up with their full-body smiles and pulling you close with their plump, soft arms. And the sweet elixir of attachment is underway.