While there is an abundance of research supporting the benefits of mindfulness, the term “mindfulness” is incredibly broad. Some people cultivate mindfulness in order to hone their attention and focus, while others see it as a tool for a kinder attitude and more intentional behavior. While seemingly simple, practicing mindfulness actually involves a variety of skills. 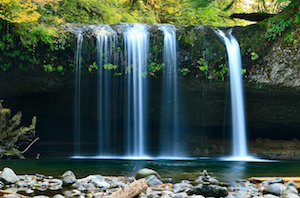 In a study published in the journal Emotion, researchers from Germany aimed to differentiate how specific components of mindfulness influenced people’s feelings in daily life. They found that when it comes to our emotions, not all mindfulness skills are created equal.

Seventy students ages 20-30 received pings via smartphone six times a day over the course of nine days. The pings included questions about the positive and negative emotions they had experienced recently, any unpleasant hassles that had occurred, and how mindful they had been, along three specific dimensions of mindfulness:

The researchers found that these different dimensions of mindfulness were linked to different benefits. First, present-moment attention was the strongest predictor for increased positive emotions—the more attentive people said they were, the better they felt overall. Second, nonjudgmental acceptance was the strongest predictor for decreased negative emotions—the more people reported nonjudgmental acceptance in their lives, the less negative emotion they reported experiencing.

For participants who had encountered a hassle in their day, adopting a nonjudgmental stance also seemed to protect their positive feelings (which took a bigger hit when people were less accepting of their hassles). Acting with awareness did not predict people’s positive or negative feelings beyond the other two skills.

What might explain these differences between specific components of mindfulness? When we’re present in our lives (yes, even for the most “mundane” things!), we may be better able to appreciate our experiences, look on the positive side, and notice the small things. That all becomes harder when our attention is split (e.g., due to multitasking, rumination, or just general mind-wandering). Present-moment attention may also help combat our tendency to give more mental weight to bad experiences than good ones.

In terms of nonjudgmental acceptance, decades of research on emotion regulation suggest that, paradoxically, acknowledging and accepting when negative emotions are present can actually help them to dissipate. Trying to not have negative thoughts or emotions (that are already there) just simply doesn’t work.

So what does this research mean for you?

If you want to feel more positive, it might help to practice being in the present moment. For example, throughout the day you could notice when your attention wanders to thoughts about the past or anticipation of the future, and redirect your attention back to just one thing—like your breath, your body, or something in your immediate surroundings. Initially, you could also practice during one specific activity, such as brushing your teeth before bed or eating the first three bites of your lunch.

If you want to feel less negative, it might help to practice being nonjudgmental. Start noticing when your mind labels yourself or others (e.g., as “stupid” or “boring”) or your experiences (e.g., as “good” or “bad”). Instead, try watching these judgments come and go, or keep a “judgment log” for a week. With this awareness of your judgments, you can then shift to simply observing and describing what’s actually going on, employing your five senses. For example, rather than yelling that someone is “driving like a crazy person,” you could note that they have changed lanes four times within the last 30 seconds without signaling, and you’re feeling worried about your safety. (It’s hard, we know.)

In the past, research has sometimes led to conflicting findings on whether mindfulness benefits our positive and negative emotions. This study sheds some light on a possible reason why, by illustrating how specific mindfulness skills might work in different ways. Look for future mindfulness research to follow a similar approach and to generate more fine-grained, actionable insights for us to apply to our lives.