Many people want to experience a sense of meaning as part of living a fulfilling life. But what brings us meaning, as opposed to just happiness? 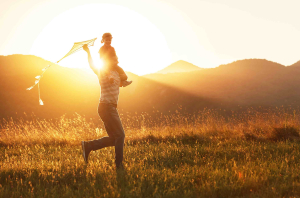 A new study aimed to help answer this question.

In the study, people were presented with various situations where they had to make judgments about whether someone’s actions benefitted society or themselves and if those actions brought a sense of meaning or happiness (or both).

For example, some people were asked to rate how much doing different jobs—like being a doctor, construction worker, banker, or teacher—benefitted someone individually (by increasing personal wealth or individual growth) or benefitted society (by helping solve a world problem or reducing large-scale suffering). Then, people rated how much doing that job would bring someone meaning or happiness.

Other participants decided what kind of life brought more meaning or happiness or gave advice to someone about how to increase their meaning or happiness. The advice people gave included things like volunteering or adopting a child (mostly beneficial to others) or traveling or engaging in hobbies (mostly beneficial to oneself). No matter the setup, people judged helping others as a pathway to meaning, whereas happiness could come from either benefitting oneself or benefitting society at large.

“When people evaluate other people’s jobs, life, or activities for meaning, they care about self-transcendence more than self-enhancement,” says study coauthor Fan Yang of the University of Chicago. “We found very strong evidence that meaning is about benefitting society, while people care about self-enhancement equally or more than self-transcendence for happiness.”

Surprisingly, though, when people evaluated their own lives, they didn’t see meaning and happiness in exactly the same way.

When some participants considered their own job and lives, meaning was not tied only to benefitting others. People could find just as much meaning in activities that benefitted themselves.

“This is actually a very surprising finding,” says Yang. “We thought we would replicate the same pattern, but self-transcendence was not a stronger predictor than self-enhancement for meaning. They were literally equal.”

Why would this be? Yang isn’t sure, but it’s possible that when we think about our own actions, we tend to believe that benefiting from them doesn’t necessarily negate their meaning. As an example, she points to how someone who plays the piano all day for pleasure might find it both meaningful and joyful, while an outside judge might say it’s not very meaningful because it doesn’t benefit anyone else.

When the researchers drilled down further, though, they discovered that this discrepancy may have to do with how people experience activities in the moment vs. how they feel when reflecting on them later.

Here, Yang and her colleagues asked a different group of participants to work on a random task: looking at photos and identifying those depicting certain numbers of people or certain types of clothes. In some cases, participants were told they’d get a monetary reward for doing the tasks; in other cases, they were told they’d be contributing to a world health project. Afterward, people reported how much meaning or happiness they got from doing the tasks.

This time, those individuals who thought they were furthering the health project felt more meaning from doing the tasks than those who were compensated with money, replicating Yang’s original results. These findings may give a better sense of where people find meaning, since the tasks themselves were exactly the same except in who benefitted and people rated the experience when it was fresh in their memories.

“People may think benefitting themselves and benefitting society work equally for bringing meaning, but in fact they experience greater meaning for doing things that benefit society,” she says.

Interestingly, people felt equally happy getting compensated with money or thinking they were helping society—there was no significant difference between the two. This suggests that you can experience happiness when you are benefitting others and don’t need to sacrifice happiness for meaning.

Yang’s findings fit in with past research showing that giving to others provides people with a sense of meaning, while also making them happier. They also mirror the philosophical idea—as well as research—suggesting that a happy life is tied to seeking meaningful activities.

“To live a meaningful life, it may be important to think about self-transcendence and what we can contribute to society, according to our own interests, ideals, abilities, and situation,” she says. “But you can definitely have both meaning and happiness when you give to others.”