These days, it seems like everyone has happiness on their mind. But beyond our everyday musings on the topic, we all hold fundamental, underlying beliefs about what happiness is—answers to questions like: Can you change your happiness level? Should you strive to be happy in every situation? How much does happiness have to do with other people?

These underlying beliefs do of course matter. They matter so much, in fact, that they have been linked to things like our overall well-being, our resilience to stress, and our relationship satisfaction. 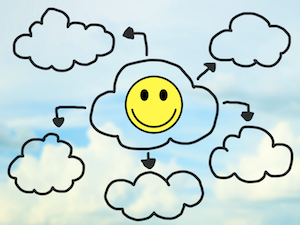 Now, a new study seems to echo these findings, but with an interesting twist. Rather than using long questionnaires to get at beliefs about happiness, researchers from Yonsei University in Korea and the University of California, Santa Barbara, asked more than 500 students in the United States and Korea one simple question: What three words come to mind when you think of happiness?

(What are yours? Trust me, you’ll want to know later.)

The students wrote down their answers, and the researchers first counted up how many times they used social words like “love,” “people,” or “hugs.” Compared to Americans, Koreans wrote down social words more often: 42 percent of the time, compared with 32 percent.

The most common word used by Koreans was “family” (mentioned by about 40 percent of people), while Americans tended to write down feeling-related words (like “smile” and “laugh”). When Americans did reference social life, they were more likely to think of “friend/friendship” than family.

“Happiness seemed to be strongly attached to a relational dimension among Koreans, whereas it reminds Americans foremost of [an emotional] state,” the researchers noted.

The researchers then compared the students’ happiness words with their reports of well-being, as measured in separate questionnaires. In both countries, students who used more social words to describe happiness reported being more satisfied with life and less lonely. They also felt closer to others and felt a greater need for belonging. In other words, associating happiness with connection and relationships seemed to be universally important for well-being, across cultures.

“We find it quite remarkable that one’s level of happiness is captured by three (social) words a person chooses to associate with happiness,” the researchers write. “The current finding affirms in a novel way that social experience is indeed a core block of happiness.”

How might these implicit associations about happiness exert their influence on our well-being? People who value social interaction would presumably invest in their relationships by caring for those around them, and giving to others has been shown to increase happiness. So one hypothesis the researchers tested is that people who see happiness as more social translate that belief into action by providing more emotional support to others.

Based on questionnaires, this was indeed the case—but there are undoubtedly other explanations. Such people might also spend more time on social activities in general, for example, or feel less guilty for prioritizing family over work. Though this study is only correlational, future studies could provide stronger evidence that the words we associate with happiness do indeed affect our well-being, and how.

While prior research has found that the more happiness has a social meaning for you, the higher your well-being tends to be, the current study adds to that research by showing how even our spontaneous, less-than-conscious attitudes about happiness matter.

The researchers argue that these implicit attitudes may actually be a more accurate snapshot of how people experience happiness, because “loose, free associative mental states are sometimes more revealing about a person than her explicit and deliberate thoughts.” The words that come to mind when we think of happiness are a kind of cognitive “package” that we’ve put together based on things like our upbringing, the culture we live in, and the personal experiences we’ve had, they add.

If these automatic associations matter, then it suggests that our well-being isn’t simply determined by the habits we deliberately cultivate or the self-help books we consume, but also by many little stimuli and connections that we may not even be aware of—meaning that the people we spend time around and the environments we live in may be more crucial than we realize.