You can find plenty of practical information out there about pregnancy and parenting, but what about the emotional rollercoaster and identity shift that occurs for many women and their partners when they have a child? We don’t talk much about it—and if we do, it’s usually in the context of postpartum depression. 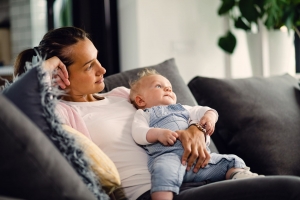 We need a new model to think about the transition to motherhood. That’s the focus of the new book What No One Tells You: A Guide to Your Emotions from Pregnancy to Motherhood, co-authored by psychiatrists Alexandra Sacks and Catherine Birndorf.

In the book, Sacks and Birndorf seek to educate readers about the stage of life called “matrescence,” which is the developmental transition to motherhood. Just as a baby transitions to toddlerhood and a child transitions to adolescence, matrescence is a natural but distinct period of life. The authors seek to normalize matrescence—the hormones, emotions, fights, periods of self-doubt, and more—rather than assuming that any difficulties around motherhood indicate a mental health issue.

Their insights come from their experience over more than a decade as reproductive psychiatrists with pregnant and new mothers, as well as research suggesting that women have unique biological, hormonal, and emotional needs during this period—and that those needs are too often neglected. Studies suggest that tools such as mindfulness can help mothers have a greater sense of self-efficacy during labor and the transition to motherhood, and many psychologists point to the importance of empathy and communication between new parents. In the interview below, Sacks shares how women and their partners can prepare for becoming parents, and why more research and greater social support is needed for this important stage of life.

Jenara Nerenberg: Is there much research happening on mental health during matrescence? 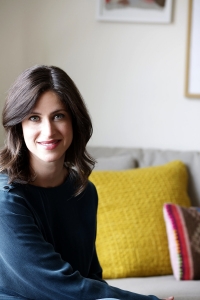 Alexandra Sacks: No, this is not a large area of research, and that’s for a couple of reasons. First of all, my training is in psychiatry, and where I work I often come across literature that’s about illness and disease. So there are fewer opportunities for education and research about psychological development. I became really interested in the big hole in public health education around developmental models aside from illness, because I think in the arc of how we talk about the psychological development of a human, there haven’t been classic models used that separate out a woman’s unique experience.

There has been a bias to assume that men and women have the same data. And that’s why we learn things [about women] later—about how heart disease manifests in women, or the cardiac impact of pregnancy. We’ve been really behind in this literature, because there’s a whole history of the Food and Drug Administration excluding women of reproductive age from clinical trials, which really only changed in the ’90s, and then still not including pregnant women in clinical trials. (Although there are some reasons for that in particular, it still means limited opportunities for data and research support.)

When we think about functional neuroimaging, there’s more research looking at disease. So in terms of questions like, “How does pregnancy change the brain?” there’s less research in that area. And that’s true across the board in terms of women’s health. It’s an area of increased need in research. Even postpartum depression has been underexplored! So it’s important to expand research on these diagnoses and treatment models for illness.

My interest was that I was seeing a clinical hole in how patients and the general population talked about emotion in pregnancy and new motherhood. I was hearing people say things like, “I think I have the postpartum,” but for many people their descriptions didn’t match the diagnostic criteria for postpartum depression. Even the expression of “postpartum” really just describes a time period. There was a desire to have more tools for describing the transition and some of the stresses around the difficulty, and so that’s where my work entered.

JN: How can women deal with these stresses and the internal dialogue—the shame, the stigma—that you talk about in the book?

AS: Discomfort and uncomfortable emotions are a natural experience in the transition to motherhood. Ambivalence, for example, is a natural emotion. I think increasing conversation to reduce shame and stigma around any negative [emotion] is important.

And also around miscarriage or fertility issues, and breastfeeding. To reduce stigma and normalize that much of this is out of your control. And to find ways to increase supportive communities for women: improved access to talk therapy, peer-to-peer experiences, and better reimbursement for professional access. And communities and experiences for women that speak to deeper questions. There’s so much talk about the objects you buy for baby and celebration and superficial aspects like clothing and baby showers—and they can be wonderful rituals, but they can sometimes not leave enough room for the fuller, more complex reality of motherhood.

JN: How do you think women can be more self-compassionate during this vital period of matrescence?

AS: Have early conversations with your partner and family about support with child care, because I think it really comes down to how you take care of yourself while you’re a caretaker. Things like exercise, social support, healthy food preparation—I just think child care is a huge aspect of this.

JN: Given your focus on lifespan development, what else would you like people to know about before pregnancy and after? 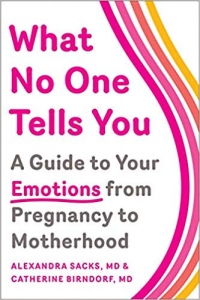 What No One Tells You: A Guide to Your Emotions from Pregnancy to Motherhood (Simon & Schuster, 2019, 400 pages)

AS: I think we need to find empowering ways to educate women and girls about their bodies so they can make informed choices. I think it’s a really complex reality that biological clock changes occur around times when people are most often maximizing their professional opportunity in their 30s. To educate people about the biological clock, fertility, and access to affordable reproductive technology, and expand such conversations around options, encourages women to take an active role in family planning and timing as it relates to other important decisions in life, like partnership, financial health, and other professional and personal goals.

And to be mindful that if you’re wanting to have more support in order to develop other parts of yourself, it’s important to verbalize those expectations. In a lot of couples, there’s an equal respect and sharing of the financial load before having children, but I think it’s hard for people to talk about how that will look after, especially based on gender roles [they learned from] how they were raised. So I encourage people to have those conversations early on in terms of how you envision life, sharing domestic responsibilities, and child care.

My hope for future generations of younger women is that we have expanded social supports for moms so that less pressure is put on the nuclear family to solve these complicated questions like going to work and also having affordable care for our children. I think education about women’s bodies and communication about social and domestic roles in partnership are important.

JN: What is the most important thing for couples to think about as they transition from pregnancy to new parenthood?

AS: How are you going to share the load—the emotional load, financial load, and domestic load? How will you have time to take care of yourselves as individuals and as a couple, and what are the ways in which you will continue to nurture your relationship that fall under the “romantic” and not under the work of parenting? I think that’s important—for the health of relationships—to create space that is about romantic connection, even after you have children.

Another thing I would say to couples is about the fantasy that having a baby will bond you and your partner together. While certainly that is the case for some couples, new parenthood is also often a stress in the relationship. So to work on the emotional health of your relationship before becoming parents is really important.

JN: If you had your pick, where would more research be directed, given this clinical hole you’ve identified?

AS: I think there should be more research on estrogen and the brain. And public health advocacy, in terms of creating social supports that are standard in other countries, like paid maternity and paternity leave. More education about equal distribution of child care in a family. And subsidized child care in our country. I think those are serious preventive health issues where we are sorely lacking in psychosocial support for women.