Nearly 15 percent of women in the United States report suffering from postpartum depression, which can arise after childbirth from a combination of hormonal changes, psychological adjustment to motherhood, and fatigue.

As the National Institute of Mental Health reports, “Without treatment, postpartum depression can last for months or years. In addition to affecting the mother’s health, it can interfere with her ability to connect with and care for her baby and may cause the baby to have problems with sleeping, eating, and behavior as he or she grows.” 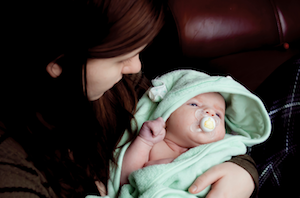 But according to a small but promising study out of the University of Wisconsin-Madison and UC San Francisco, two days of mindfulness training could help improve mothers’ experience of labor and reduce the likelihood of postpartum depression.

Thirty low-risk, first-time mothers of various ethnicities participated during their third trimester in a weekend-long childbirth education workshop, along with their birth partners. Half (a control group) took a traditional childbirth course in their local area, while the other half took a workshop called the Mind in Labor: Working with Pain in Childbirth, which is based on the well-researched, two-month Mindfulness-Based Childbirth and Parenting (MBCP) program.

In the mindfulness workshop, instructors taught 18 hours of mindfulness skills through interactive, experiential activities for coping with childbirth pain and fear, in addition to more traditional lessons about the physiology of birth. For example, expectant mothers were guided to reframe labor pain as “unpleasant physical sensations that come and go, moment by moment.”

As co-author Nancy Bardacke explains, pain in the body is different from thoughts and emotions generated in the mind. “Pain as physical sensation is still present, but the suffering caused by the mind can be significantly diminished,” says Bardacke, founding director of MBCP and author of Mindful Birthing.

The results showed that mothers in the mindfulness group seemed to have had a better psychological experience of labor compared to the control group. They reported feeling greater “self-efficacy” during childbirth (the sense that they were able to handle it rather than feeling afraid), and lower symptoms of depression after the workshop and several weeks after childbirth.

Perhaps as a result, there was a trend toward fewer of the mindfulness group mothers using opioid analgesia (like fentanyl and morphine) during childbirth. Such drugs “have side effects that can negatively impact the fetus,” so less usage “is highly desirable,” the scientists write. There was no difference between the mindfulness group and the control group in the rate of epidural use, or in how painful they found labor to be. (The results did not include two study participants who required Caesarean sections.)

This study contributes to a growing body of research showing the benefits of mindfulness for women and babies during pregnancy. It offers one of the first looks at mindfulness training and use throughout labor and its benefits to first-time mothers and their babies in the immediate postpartum period, albeit among a very small group.

“Fear of childbirth poses substantial risks to healthy adjustment from pregnancy through birth and into the early postpartum period,” write the research team. Their findings “suggest the potential utility of intervening…to reduce childbirth fear and pain and improve perinatal outcomes.”

Co-author Larissa Duncan, a professor at the University of Wisconsin-Madison, says that future studies should try to gather data in real-time during childbirth, in order “to better understand birth processes and experiences”—instead of asking women about their labor pain after they’ve given birth.

The study authors also encourage more research into the Mind in Labor approach. Assuming further research is promising, “we believe it can be offered as a universal prevention program,” they write. “Intervening in this sensitive period of developmental plasticity may produce important long-term health benefits for children and families.”

If you are experiencing depression after the birth of a child or feel you might be at special risk for it, tell close friends and family, and seek professional help.