"The question that launched me on this journey could not be more basic: Does God exist? Or, put another way: Is there more than this material reality?" writes Barbara Bradley Hagerty toward the beginning of Fingerprints of God.

These are age-old questions. But what distinguishes Hagerty's book from countless others like it is that she seeks answers in science, not just spirituality. 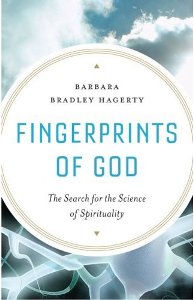 The religion correspondent for NPR, Hagerty explores the nature of religious experience, looking to scientific research and her own personal experience as guides. Hagerty grew up a Christian Scientist, strayed from that faith, then become a born again Christian later in life. Doubting whether any of these beliefs could withstand scientific scrutiny, she embarks on a quest to determine if numinous experiences are anything more than a trick of the mind.

In a thorough survey of research on people who have reported transcendent experiences—from Pentacostal Christians speaking in tongues to meditating monks—she learns that the brain does indeed physically change during experiences that participants classify as divine. Those who meditate, pray regularly, or have had near-death experiences show significantly altered brain function.

Interestingly, research shows that across religious divides and cultures, people offer the same descriptions of their religious experiences, reporting feelings of love, compassion, purpose and connection. What's more, regardless of one's culture, during a mystical experience, people all over the world show similar brain activity: The frontal lobes light up, the parietal lobes (which orient you in time and space) go dark, creating a feeling of oneness. (Some psychedelic drugs, such as psilocybin, have the same effect of blocking out external sensory information.)

In considering the implications of these findings, Hagerty talks both to scientists who have had mystical experiences and scientists who write off these experiences as mild seizures. She does find a number of clearly documented instances when the seemingly impossible happened: the blind see, or the clinically dead report what happened in the operating room, where they claim to have hovered over their bodies, watching doctors resuscitate them. Ever the skeptic, Hagerty finds scientists who also try to debunk these claims.

Are spiritual experiences anything more than a quirk of brain chemistry? In the end, Hagerty can't say for sure. Science cannot reach beyond the material world, and so we may never know. But Hagerty traces her path full circle to where neuroscience and Christian Science agree: that the brain has the capacity to change itself.

What implies that Revelations was a mystical experience?  Religious experiences are often not mystical- hence each religion having it’s mystical counterpart, such as Kabbalah to Judiasm, Sufism to Islam, Gnosticism to Christianity.
The religious experience generally separates the divine from the self.  The mystical experience is generally characterized by either melding a person with the totality of creation, or being in direct contact with a loving consciousness.
Visions, hallucinations, or fantastical imaginings can be of any color… but pop someone seeing destruction of the world in an fMRI and I’ll bet the same areas of the brain activating in these “divine” experiences will not light up.
One of the key points of the book was that experiences people characterized as mystical were the same across cultures, and generally people who had those experiences no longer felt bound to a single religion, or felt that love and respect should be confined to any religious, ethnic or cultural group.
——-