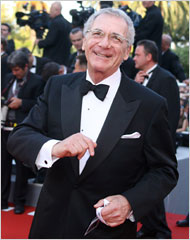 Sydney Pollack, the actor, director, and producer who died of cancer on Monday, has been widely eulogized by the media over the past two days. A.O. Scott's piece in The New York Times today and a segment yesterday on Fresh Air, to name just two, have rightly paid tribute to Pollack's skill as a storyteller and the strength and intelligence he projected onscreen as an actor.

Though I'm a fan of many of the films Pollack directed (especially Tootsie, of course) and often thought he was the best thing in many of the films in which he appeared (like Eyes Wide Shut), I'm especially fond of a lesser known work of his. In a 2003 commencement address he delivered at an exceptionally eloquent meditation on how works of fiction can foster empathy and compassion. I actually tried, in vain, to get permission to reprint part of this speech in the first issue of Greater Good, which featured a series of essays on compassion; however, psychologist Keith Oatley contributed an excellent piece on the topic to our Winter 2005-06 issue. This will also be a topic Greater Good revisits in an upcoming issue on the arts.

Unfortunately, no longer has the full text of Pollack's address online. But here's an excerpt. If you've ever seen Pollack act, I'm sure you'll be able to hear his voice in your head as you read it.

We all live rather prescribed and narrow lives. I'm just this one white guy, 60-something years old. I'll never be anything else except older. I've got one set of kids. I've got one wife. That's it for me. But then there's this great, great library of experiences that's housed in the liberal arts. Fictional worlds created that I can put on like this gown or coat, eyes I can borrow through which to see the world.

I can be a black housewife. I can be a king. I can be a 19th-century fur trapper. I can be a C.I.A. spy. I can be a warrior. I can learn what it feels like to be tried and convicted, to confess, to win the beautiful girl, lose the beautiful girl. It's a way of understanding the world that functions beyond intellect and it teaches and touches through feeling and experience even when the experience is purely that of the imagination. Compassion finally is the great gift of literature. Fiction, and by that I mean the aesthetic creation of all artificial worlds, must persuade you to interpret the world through compassion.