Kitty Genovese’s screams were ignored in 1964, but she has been embraced as a pop culture icon ever since.  Musicians, playwrights, and filmmakers have all found meaning in the story of her murder and its 38 witnesses.

“It’s a story about ordinary people in a horrible situation,” said playwright David Simpatico, whose opera The Screams of Kitty Genovese was featured in the New York Musical Theatre Festival last September. “Her story reminds us, in our current culture of fear, that we have to take care of each other.” 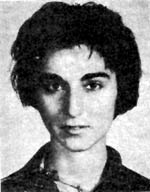 One of the first times Genovese’s murder appeared in popular culture was in Phil Ochs’s 1967 song, “Outside of a Small Circle of Friends.” In the first verse, he sang:

Look outside the window, there’s a woman
being grabbed / They’ve dragged her to the
bushes and now she’s being stabbed /
Maybe we should call the cops and try to
stop the pain / But Monopoly is so much
fun, I’d hate to blow the game /
And I’m sure it wouldn’t interest anybody /
Outside of a small circle of friends.

In 1975, CBS made a TV movie based on the murder, Death Scream, starring Raul Julia as the investigating detective. In the 1980s, Kitty’s murder was featured as the incident that inspired a vigilante superhero to fight crime in Alan Moore’s comic book series, Watchmen.

In the last year alone, there’s been a flurry of dramatic retellings of the story, including a play based on interviews with Kitty’s lesbian lover, 38 Witnessed Her Death, I Witnessed Her Love: The Lonely Secret of Mary Ann Zielonko. A group of Pittsburgh-area college students made a film about the murder, When Darkness Cries, and Kitty’s brother, Bill, is finishing a documentary about the people who have been touched by his sister’s death. Playwright David Simpatico said he spoke with Bill Genovese after the opening performance of The Screams of Kitty Genovese.

“I told [Bill] why I had to write this opera: because maybe after seeing this performance, the audience will be better armed, and they’ll think, ‘Oh, I’ve seen this situation before, I know what to do.’”