Video games—like comic books, cartoons, and Schwarzenegger films before them—are often blamed for causing all sorts of violent, antisocial behavior. But what if a game revolves around cleaning up a polluted environment or helping a family put their house in order? According to a new study, video games where players help others can actually increase helpful behavior in real life.

The study, conducted by a group of researchers from around the world, to be published in an upcoming issue of the journal Personality and Social Psychology Bulletin, looked at the links between video games and the behavior of those who play them. But instead of just examining violent video games, the researchers also included games in which players help and support each other in nonviolent ways—what they call "prosocial games." 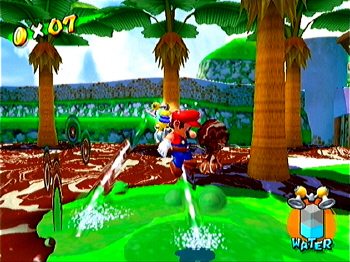 A scene from Super Mario Sunshine

In a study of American undergrads, the researchers actually uncovered more direct evidence that prosocial games might cause prosocial behavior.

They assigned some students to play a video game that the researchers deemed prosocial-either Super Mario Sunshine (pictured above), in which Mario must clean up environmental pollution, or Chibi Robo, where players assume the role of a robot who helps a family manage their house. Other participants had to play a violent game, such as Crash Twinsanity, where an anthropomorphic bandicoot moves from stage to stage, shooting, hammering, and throwing enemies who get in his way, while others played games, such as Pure Pinball, that were neither violent nor prosocial.

After playing the game, the students were paired with another person and told to make their partner complete 11 puzzles from a selection of 30—10 of which were hard, 10 easy, and 10 in between. They were informed that if their partner was to solve 10 of the puzzles correctly, then the partner would receive a $10 gift certificate. The researchers deemed a person's behavior as "helpful" if the participant gave his or her partner an easy puzzle, "hurtful" if the puzzle was hard, and "neutral" for medium puzzles.

It’s really nice to see the positive side of gaming
emphasized for once instead of all the violent games
being put in a negative daylight and related to violent
incidents.

Thanks Carl. You might also be interested to read this other article we published on the positive effects of certain types of games:
http://greatergood.berkeley.edu/article/item/gaming_for_good/

And this new article on why games may have negative effects on certain kids rather than others:
http://greatergood.berkeley.edu/article/item/are_video_games_truly_bad_for_kids_health/