For years, video games have been linked to aggression and violence, with researchers and media reports suggesting that violent games have inspired or even caused violent acts.

But a new study suggests that video games can be a force for good, finding that games with positive objectives can actually inspire people to perform acts of altruism. 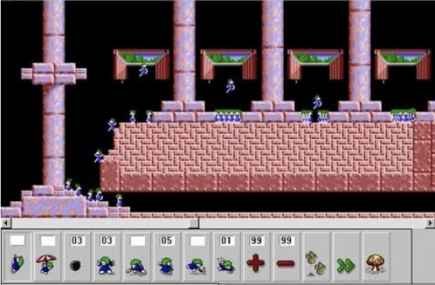 Research suggests that games like Lemmings, where the goal is to help others, inspire real-life acts of altruism.

Over four experiments, Tobias Greitemeyer and Silia Osswald, researchers at the University of Sussex in England and Ludwig-Maximilian University in Germany, respectively, had participants play either a “prosocial” game—a game where the goal is to help others—or a “neutral” game, meaning it has no characters with whom to interact positively or negatively, like Tetris. Then the researchers placed the participants in situations where they had the opportunity to help others, ranging from low-risk situations, such as seeing a dropped cup of pencils, to high-risk ones, like witnessing an angry ex-boyfriend harass an experimenter.

Greitemeyer and Osswald wanted to see if the participants were more likely to intervene after playing a prosocial game such as Lemmings (pictured), which tasks players with ensuring the safety of a group of fatally stupid creatures.

The authors also investigated why they might have seen this link between prosocial games and prosocial behavior. Essentially, they suggest that playing video games with prosocial objectives fosters a prosocial mindset that makes people more willing to help others.

According to a study cited in the paper, 70-85 percent of games involve some kind of violence. So, although the content of games can cause behavioral shifts in either an aggressive or altruistic direction, gamers are much more likely to experience the former.

The authors’ response to this disparity is a simple one. “There is clearly a need for prosocial video games that are highly attractive to customers,” they write. “Convincing the video game industry to create such games would be an important first step.”

I’m only 17 years old, and I’ve played video games pretty much my whole life. Almost every one of the games I’ve played had violence in them, but I have not had an aggressive attitude. Even so, I agree with you on the subject. I just think this aggressive attitude can be sated in other ways. For example, I have also played sports my whole life. I’m a member of 3 different varsity sports now. I think this was where I was able to let out any aggressive behaviors in a constructive way. I believe that children who play video games, should also be active in sports and social activities. It just think it helps improve character.

It’s really nice to see a study on the positive effects of gaming. It’s too bad you have to pay for the full study because I’m curious in how exactly the study group showed more pro-social behaviour and how they determined this behaviour was a direct effect of the game previously played. I guess there would be a lot of more factors coming into play to draw such a conclusion.

It would be interesting to see a similar study that took place with a co-operative game (i.e. one where 2 or more people work together simultaneously to accomplish a goal) and compare the results to this study and see if similar results are obtained.  It’s great to see games are gaining more acceptance.

Studying the game on the positive is what people should learn. Like me i teach my friend and siblings that game teach them a lot of things…

this is just wrong on so many levels. video games have never been proven to cause violence in people, if everyone who played grand theft auto, mortal kombat, or any “army” game turned violent, it would be like mad max out there. while its true that some violent people have played violent video games, you cant use them as the standard, if you did it would also be true that gov’t work, teaching, being a student, playing sports, being a musician or an actor all turn people violent.
That being said in the game lemmings it is necessary to sacrifice a few lemmings to ensure the safety of the rest, if that’s what is considered pro-social behavior then i am proud to be anti-social

The whole video games = violent behavior argument has never been legitimately about the sociological effects of this medium. It’s always been about politicians trying to find the new social boogey man since America is no longer scared by pot or black people or commies. Fear makes people give away their power to those they think can protect them; hence the various attempted political crusades against games since the early 90’s.

Radio did not make people stupid. Television did not rot your brain. Rock music was not the devil’s music. And video games do not make psychopaths. Maybe it’s time to learn from past hysterical behavior, hmm?

Dude. If video games inspire violence, then I would
like to see the day they inspire orange and blue
portals as transportation.

I have a bachelors degree of psychology, and i’m a
gamer. I did a very lengthy report on video games and
their effects, and unfortunately those who played
violent games (such as GTA, COD) were more likely to
behave aggressively immediately after playing the
games.
sad but true

i’m sure its also true you didn’t do background test on those that acted aggressively to those those who didn’t act aggressively… get a passive guy who plays violent games and he’s still passive after finishing, get an aggressive guy possibly more aggressive. i don’t know i’m the passive guy

To be honest, I only ever played lemmings to watch them die. I wasn’t allowed to play for very long.

i wish my study is playing games like this ..
itn’t it fun?

This is great stuff.. also, It’s great to see games are gaining more acceptance. To be honest, nintendo’s mario bros is one of my favorite game.. much like this.

Hi Kyle i don’t agree that violent computer games will inspire people to do violent things, if this is the case why do they keep creating games like this?

“Research suggests that games like Lemmings, where the goal is to help others, inspire real-life acts of altruism.” Yeah…You won’t get that from Grand Theft Auto. lol

I see only one coincidence: Let idiots play violent games, and they become bigger idiots. You see them enjoying the killing and death animations. And often they yell for more. That doesn’t happen with the average kid. They like the cooperative game-play (or competitive), showing their reaction speed and skills and would play the game even if it won’t show blood. But I understand, that you can’t demand a test for idiocy at the point of sale. And the question is, what number is bigger, idiots or average/ smart kids? I fear the answer. Maybe we should take care for the idiots and ban violent games for everybody. At least it will lead to less idiots getting dumb ideas. That would be a benefit for all of us.