How Pleasure Works: The New Science of Why We Like What We Like is an engaging, stimulating, and richly informative book on “why we like what we like.” Paul Bloom, a professor of psychology at Yale University, explores a broad range of human pleasures from food to sex to religion to music. Drawing on diverse fields of knowledge, including evolutionary theory, developmental psychology, philosophy and neuroscience, Bloom convincingly drives home the message that human pleasure is not purely an instinctive, superficial, sensory reaction; it has a hidden depth and complexity. 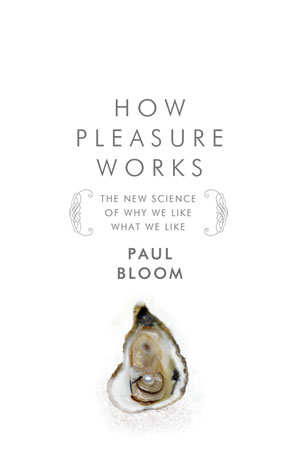 Humans’ “essentialist” mindset shapes our understanding of the physical and social world, and determines what we find pleasurable, as well as disagreeable. When people are willing to pay thousands of dollars for a tape measure owned by John F. Kennedy, for example, this reflects a desire to own an object that seems to contain JFK’s essence by dint of having been touched by him. Conversely, when people refuse to eat fudge shaped like feces, sip fresh water from a cup labeled cyanide, or wear a sweater that supposedly belonged to Hitler, their essentialist minds are again at work.

In accessible, lucid prose, Bloom delves into the various sources of human pleasure with dazzling intellectual depth and breadth. His discussion of the uniquely human pleasures of imagination—fiction, movies, television, daydreaming—is particularly thoughtful and thought-provoking. These pleasures serve as proxies, argues Bloom, for other pleasures that are inaccessible, too risky, or too much work. His argument is convincing: After reading it, you may never watch a movie the same way again.

Ultimately, Bloom distinguishes himself not just as a great thinker but as a great writer, successfully weaving together fascinating findings from psychology experiments, memorable quotes, and illuminating anecdotes. Deploying his skills as a storyteller as well as a psychologist, he makes clear why experiencing—and understanding—pleasure is key to a meaningful life.