My teenage son is buried in homework. Now that he’s on his high school crew team, with its 15 hours of practice per week, keeping up academically for him has meant not enough sleep, feeling stressed out a lot, and having little time to spend with family and friends. This can’t be healthy; but my son’s convinced that this relentless schedule will somehow get him into a “good” college. As his mother, shouldn’t I be concerned? 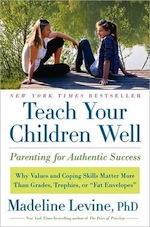 Definitely, according to Madeline Levine, author of the new book, Teach Your Children Well: Parenting for Authentic Success. Levine, a psychotherapist and bestselling author, warns that pushing kids toward extreme achievement is hazardous to their health. While many highly successful kids may seem OK on the outside, she has found that often many are hiding problems on the inside, such as depression, eating disorders, or self-destructive behaviors, like cutting and drug use. After chronicling this phenomenon in her previous book, The Price of Privilege, Levine now offers parents some more specific guidelines on what they can do to help their kids avoid these pitfalls.

Levine’s book is informative when it comes to teen development and how that affects the parent-child relationship. Although she concedes parents may have limited influence—in part because of the pervasiveness of the internet and social media in teens’ lives—she argues that we must still communicate our values, act as role-models, and serve as consultants to our teens, all of which will help them to build self-confidence and competence. She suggests we communicate with warmth and respect toward our kids, while setting firm, consistent limits on behavior, and that this parenting formula—sometimes called “authoritative parenting” in the research literature—has been shown to lead to better mental and physical health for kids.

Levine urges parents to stay away from pushing their kids to achieve at any cost and, instead, encourages them to help their kids pursue their interests, whether that’s building satisfying relationships, creating art, or finding a way to contribute to the social good. These kinds of experiences constitute authentic success, she writes, and, as positive psychology guru Martin Seligman can attest to, they lead to greater happiness as well.

She also believes we should nurture a growth mindset in our kids, in which hard work is praised more important than success and occasional failure is considered a natural outcome of trying something new. And while Levine believes that all kids are unique and talented in some way, she warns parents to worrying that their children must be extraordinary to be successful.

“We need to distinguish between the inherent uniqueness of our children, and the unrealistic specialness we insist on when we argue with teachers or coaches or push our children past their limits,” she writes. “The former moves our kids forward, the latter only hinders their progress.”

I agree with Levine’s point on this; but I must say, sometimes I feel I’m fighting an uphill battle. The pressure my son gets from teachers, coaches, and even fellow students to be the best can make it hard for messages of moderation to cut through. Still, reading Levine’s book offered me an important reminder of why it’s important to stay involved in my son’s life without being over-involved. I may not be able to fix his homework problem for him. But, by being a parent who listens and provides appropriate support, I’m at least planting the seeds of self-reliance that will last him well into adulthood.

We as a nation ought to practice more compassion and President Obama could offer very erfective leadership in pardoning more people who have undue sentences.  Here are very good suggestion what the President could do to improve the situation:
http://www.nytimes.com/2013/01/06/opinion/sunday/the-quality-of-mercy-strained.html?hp

thank you for passing this around.  I am calling the White House comment line on Monday at 202-456-1111 and make the President aware of the editorial and its very good suggestions.