If you’re considering a little Botox to wipe out some wrinkles, you might want to think again: A recent study suggests that a shot of Botox might make it more difficult to empathize with others.

In the study, published in Psychological Science, researchers tested people before and two weeks after they received a Botox treatment that paralyzed the brow-wrinkling muscles used in frowns. During the test, they were asked to read sentences describing an emotional situation that made them happy, sad, or angry. In each case, the participants had to give a signal as soon as they had understood the sentence. 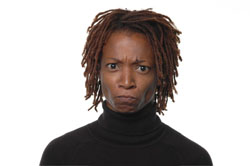 The results showed that after the Botox treatment, participants took longer to understand sentences with sad and angry emotions—the emotions typically expressed by the kind of furrowed brow that the participants were no longer capable of making, thanks to the Botox.

These findings point to a complicated relationship between expressing emotions and feeling them. The authors write that their findings back up the “facial feedback hypothesis,” which claims that your facial expressions influence both your emotions and your interpretation of emotional signals: If you aren’t capable of displaying sad or angry facial expressions, for instance, then you won’t feel or see those emotions out in the world as much.

So though it may sound good to live a life free of frowns and negative emotions—not to mention wrinkles—the authors warn that this could have some terrible side effects: You’d be less able to feel empathy for others. For instance, if you get a Botox shot before talking with a friend having a bad day, you might miss your friend’s subtle cues that he or she is feeling sad. True, you might not personally feel as much sorrow—but at the cost of being an unsympathetic friend, who struggles to provide social support.

I’m glad to see this article.  I’ve noticed young TV stars are
already getting facelifts.  How are their fans supposed to
interpret the star’s surgically altered expressions?

This doesn’t surprise me at all.  In fact, I got my first Botox (actually, Dysport) injection about six weeks ago.  A couple of days later, I commented to my partner that I seemed calmer generally, and that things that would usually make me anxious or upset didn’t phase me nearly as much.  This is a phenomenon the psychological/psychiatric field should definitely investigate further, as there could be beneficial effects for certain people.

After studying neuroscience for many years this
doesn’t come as a surprise. Many other studies I have
read point to a strong link between the physical and
emotional connection.

An example is how people find it hard to feel
depressed when sitting or standing with perfect
posture, or even people looking up when they are
about to cry results in them being less able to access
the emotions.