One of the greatest formative experiences of my life preceded Harry Potter, though it informed much of what I subsequently wrote in those books.

This revelation came in the form of one of my earliest day jobs. Though I was sloping off to write stories during my lunch hours, I paid the rent in my early 20s by working in the research department at Amnesty International’s headquarters in London.

There in my little office, I read hastily scribbled letters smuggled out of totalitarian regimes by men and women who were risking imprisonment to inform the outside world of what was happening to them. I saw photographs of those who had disappeared without a trace, sent to Amnesty by their desperate families and friends. I read the testimony of torture victims and saw pictures of their injuries. I opened handwritten, eye-witness accounts of summary trials and executions, of kidnappings and rapes. 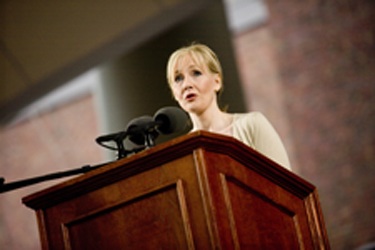 Many of my co-workers were ex-political prisoners, people who had been displaced from their homes, or fled into exile, because they had the temerity to think independently of their government. Visitors to our office included those who had come to give information, or to try and find out what had happened to those they had been forced to leave behind. …

As long as I live I shall remember walking along an empty corridor and suddenly hearing, from behind a closed door, a scream of pain and horror such as I have never heard since. The door opened, and a researcher poked out her head and told me to run and make a hot drink for the young man sitting with her. She had just given him the news that in retaliation for his own outspokenness against his country’s regime, his mother had been seized and executed.

Every day of my working week in my early 20s, I was reminded how incredibly fortunate I was to live in a country with a democratically elected government, where legal representation and a public trial were the rights of everyone.

Every day, I saw more evidence about the evils humankind will inflict on their fellow humans to gain or maintain power. I began to have nightmares, literal nightmares, about some of the things I saw, heard, and read.

And yet I also learned more about human goodness at Amnesty International than I had ever known before.

Amnesty mobilizes thousands of people who have never been tortured or imprisoned for their beliefs to act on behalf of those who have. The power of human empathy, leading to collective action, saves lives and frees prisoners. Ordinary people, whose personal well-being and security are assured, join together in huge numbers to save people they do not know, and will never meet. My small participation in that process was one of the most humbling and inspiring experiences of my life.

Unlike any other creature on this planet, humans can learn and understand, without having experienced. They can think themselves into other people’s minds, imagine themselves into other people’s places. Of course, this is a power, like my brand of fictional magic, that is morally neutral. One might use such an ability to manipulate or control, just as much as to understand or sympathize.

And many prefer not to exercise their imaginations at all. They choose to remain comfortably within the bounds of their own experience, never troubling to wonder how it would feel to have been born other than they are. They can refuse to hear screams or to peer inside cages. They can close their minds and hearts to any suffering that does not touch them personally. They can refuse to know. I might be tempted to envy people who can live that way, except that I do not think they have any fewer nightmares than I do.

Choosing to live in narrow spaces can lead to a form of mental agoraphobia, and that brings its own terrors. I think the willfully unimaginative see more monsters. They are often more afraid.

What is more, those who choose not to empathize may enable real monsters. For without ever committing an act of outright evil ourselves, we collude with it through our own apathy.

One of the many things I learned studying classics at the age of 18, in search of something I could not then define, was this, written by the Greek author Plutarch: “What we achieve inwardly will change outer reality.”

That is an astonishing statement and yet proven a thousand times every day of our lives. It expresses, in part, our inescapable connection with the outside world, the fact that we touch other people’s lives simply by existing. …

If you choose to use your status and influence to raise your voice on behalf of those who have no voice; if you choose to identify not only with the powerful, but with the powerless; if you retain the ability to imagine yourself into the lives of those who do not have your advantages, then it will not only be your proud families who celebrate your existence, but thousands and millions of people whose reality you have helped transform for the better.

We do not need magic to change the world. We carry all the power we need inside ourselves already: We have the power to imagine better.