Leaving aside the technological futureshock, with all its comic possibilities, what will amaze him most is the size of the crowd he finds himself in: as many people, within a block or so, as he has ever seen together in his life, and then only at the annual gatherings of his tribe, where several hundred people might come together at a time, for days of dancing, feasting, and other carnival-like activities. 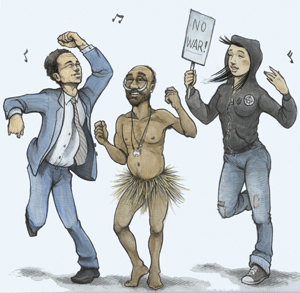 For a moment, the prevalence of face paint on the New Yorkers and—from our visitor’s point of view—their universal “costuming” may fool him into thinking he has emerged into a similar kind of festivity, but the facial expressions of the people around him will immediately believe this supposition. The faces are closed, unsmiling, intent on unknown missions, wary of eye contact. Whatever these people are doing, they are not celebrating. And this will be the biggest shock to him: their refusal, or inability, to put this abundant convergence of humanity to use for the kind of collective, festive celebration that gave joy and meaning to our visitor’s life.

Our civilization has its compensatory pleasures, of course. Most often cited is the consumer culture, which encourages us to deflect our desires into the acquisition and display of things: the new car, or shoes, or face-lift. We have “entertainment,” too, including movies, computer games, and iPod-delivered music for solitary enjoyment. It is a measure of our general deprivation that the most common referent for “ecstasy” in usage today is not an experience but a drug, MDMA, which offers fleeting feelings of euphoria and connectedness.

How can civilization be regarded as a form of progress if it precludes something as distinctively human, and deeply satisfying, as the collective joy of festivities and ecstatic rituals? In a remarkable essay entitled “The Decline of the Choral Dance,” Paul Halmos wrote in 1952 that the ancient and universal tradition of the choral dance—meaning the group dance, as opposed to the relatively recent, European-derived practice of dancing in couples—was an expression of our “groupward drives” and “biological sociability.” Hence its disappearance within complex societies, and especially within industrial civilization, can only represent a “decline of our biosocial life”—a painfully disturbing conclusion.

But there is no obvious reason why festivities and ecstatic rituals cannot survive within large-scale societies. Whole cities were swept up in the French Revolution’s Festival of Federation in 1790, with lines of dancers extending from the streets and out into the countryside. Rock events like Woodstock have sometimes drawn tens of thousands for days of peaceful dancing and socializing. Modern Brazil still celebrates carnaval.  Today’s nonviolent uprisings, like Ukraine’s Orange Revolution, invariably feature rock or rap music, dancing in the streets, and “costuming” in the revolutionappropriate color.

Festivity seems to generate inclusiveness. The music invites everyone to the dance; shared food briefly undermines the privilege of class. No source of human difference or identity is immune to the carnival challenge: Cross-dressers defy gender just as those who costume as priests or kings mock power and rank. At the height of the festivity, we step out of our assigned roles and statuses—of gender, ethnicity, tribe, and rank—and into a brief utopia defined by egalitarianism, creativity, and mutual love. This is how danced rituals and festivities served to bind prehistoric human groups, and this is what still beckons us today.

Many millions of people around the world are engaged in movements for economic justice, peace, equality, and environmental reclamation, and these movements are often incubators for the solidarity and celebration so missing in our usual state of passive acquiescence. Of course, no amount of hand-holding or choral dancing will bring world peace or environmental healing. In fact, festivities have served at times to befuddle or becalm their celebrants.  European carnival coexisted with tyranny for centuries.

And yet… it does not go away, this ecstatic possibility. Whatever its shortcomings as a means to social change, protest movements keep reinventing carnival. Almost every demonstration I have been to over the years has featured some element of the carnivalesque: turtle suits symbolizing environmental concerns, drumming, giant puppets, dancing. The media often deride the carnival spirit of such protests, as it were a self-indulgent distraction from the serious political point. But seasoned organizers know that gratification cannot be deferred until after “the revolution.” People must find, in their movement, the immediate joy of solidarity, if only because, in the face of overwhelming state and corporate power, solidarity is their sole source of strength.