If you commute on a bus or train, you’ve probably noticed that most people spend the ride looking at their cell phones. No doubt, they assume doing nothing but sit there would be boring, so they prefer distracting themselves. This squares with past research showing people will do almost anything to avoid boredom—even administer electric shocks to themselves. 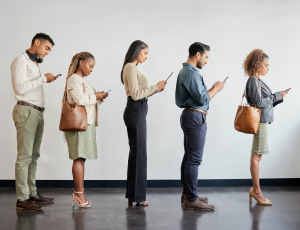 But results from new research suggest we should rethink that choice. We are probably underestimating how enjoyable and interesting it is to do nothing but pay attention to wherever our thoughts take us.

In a series of experiments, researchers brought Japanese university students into a lab and told them that they would soon be going into a room without their belongings to wait and do nothing but sit for 20 minutes. They were further instructed that, while waiting, they could think about anything they wanted to, but were not allowed to sleep, walk, or exercise; look at a smartphone; or consult a watch.

Before entering the room, they were asked to predict how much they’d enjoy waiting and thinking, how interesting or boring it would be, and how much it would engage them so that they’d lose track of time. Then, they went in the room to wait. Afterward, they reported how waiting actually felt—how engaging, pleasurable, interesting, or boring it was. (In some variations of the experiment, they waited in a dark room without any stimulation.)

Either way, researchers found that the participants were not good at predicting how much they’d enjoy doing nothing but think. Even in a dark room with no stimulation, they ended up being more engaged and interested than they’d anticipated.

“People don’t appreciate the real value of waiting/thinking,” says researcher Kou Murayama of the Motivation Science Lab at the University of Tübingen in Germany and coauthor of the study. “Once they engage in it, though, they appreciate it.”

To test this idea further, Murayama and his colleagues recruited another group of students and repeated the experiment. But first they asked students whether they’d rather have a 75% chance of being in a room without any stimulation or with a computer they could use to check the news. Not surprisingly, most students wanted the latter and predicted they’d enjoy waiting more if they had computer access.

Then, the researchers randomly assigned students to have a computer in the room or not and asked them to report afterward how the experience went. Despite predictions, there were no significant differences between those who waited with or without a computer; both groups liked the experience equally.

Why would this be? The students didn’t report on their actual thoughts, so it’s hard to know exactly where their minds went. But spontaneous thinking often involves mind-wandering, daydreaming, thinking about the future, or recollecting memories, all of which can have upsides. For example, daydreaming and mind-wandering have been found to improve our mood, creativity, goal-setting, and job performance (especially during a repetitive task). And thinking about the past in a nostalgic (rather than ruminative) way can make us happier and more resilient to stress.

Though it’s hard to know if these results with students would apply to the rest of us, Murayama did at least compare German students to Japanese students and found both groups underestimated the pleasure of waiting to a similar degree. This implies that it’s not necessarily a culturally-driven phenomenon, though more research would need to be done to verify that.

Overall, says Murayama, the results suggest we rethink whipping out our cell phones every time we are waiting or bored. Instead, we might benefit from having a moment to think freely about whatever catches our fancy—and enjoy ourselves just as much.

“If you find yourself checking mobile phones when there is nothing to do, try to take a moment to entertain yourself with thinking,” advises Murayama. “You may have new refreshing experiences that you did not expect.”