We humans evolved to be social creatures. By gaining the skills to cooperate with others, we were able to stave off predators, eat more consistently, and care for each other’s young, allowing our genes to carry forward. 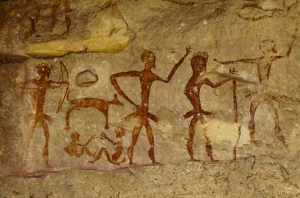 So, why do we still struggle at times to get along—even to the extent that we war on one another? And how can understanding our evolutionary heritage help us have better relationships and more happiness today?

There are the kinds of questions pondered in psychologist William Von Hippel’s book The Social Leap. Von Hippel explains that while evolution has shaped us to work together cooperatively to survive, it has also made us susceptible to the lure of competition and status in a way that can endanger our relationships and well-being.

The book is partly a history of how we came to be the complex social creatures we are today, starting all the way back in early human development. Researchers are able to find clues about early hominid social behavior in fossil records and DNA or other markers—for example, examining fossil teeth of human ancestors in a particular region to conclude who migrated there and who were locals.

Von Hippel draws on research from anthropology, paleontology, evolutionary biology, and more to explain how different developments drove the human race forward. Walking on two legs instead of four allowed early humans to protect themselves by throwing stones; storytelling propelled shared learning and an accumulation of knowledge; agriculture bred inequality and fierce protection of resources; and cities propelled people to develop specialized skills and become better at reading others’ intentions. Our whole social order, including when we cooperate, show concern, and choose mates, he writes, can be explained by evolutionary driving forces—the need to survive and reproduce, so that our genes will be passed along.

How does evolution explain our behavior today?

“Nothing is more important to us than our social connections because nothing was more critical for our ancestors’ survival and reproduction,” writes Von Hippel. That’s why we evolved to intuit what others are thinking, to be able to read social cues, and to affiliate with groups of people who seem to accept and validate our thoughts and feelings. It makes us feel safe and secure.

Good social skills are even tied to survival on a neurological level. For example, when people have good impulse control in social situations, they take more time to think and act appropriately when provoked. And, since the same parts of the brain responsible for social impulse control are at work when we resist self-destructive behaviors—like taking a hit of cocaine or driving too fast on the freeway—they do double duty.

In addition, we are often a surprisingly cooperative, generous, and altruistic species. “Generous people are more popular than stingy or calculating people all over the world,” he writes, adding that “even though generous people do get exploited [sometimes], in the long run, they win far more than they lose.”

While we get along with others for our well-being and safety, differentiating ourselves from those around us can be a boon to survival in a different way: by enhancing our desirability as a mate. The drive for social status sometimes makes us do things that seem irrational or even antisocial, says Von Hippel. For example, we may act overconfident, exaggerate our finer qualities, and see ourselves as more attractive than we are (and others as less than they are). Overconfidence also intimidates those who might compete with you or hurt you—an advantage for behavior that might otherwise appear, well, annoying. 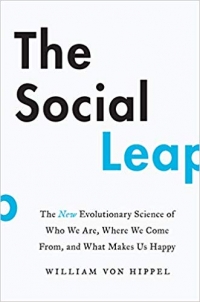 The Social Leap: The New Evolutionary Science of Who We Are, Where We Come From, and What Makes Us Happy(Harper Wave, 2018, 304 pages)

The need to be at the top of the social heap (at least in our own minds) may explain why we selectively look at information that inflates our ego and ignore the rest. And it helps explain why people sometimes vote against their own interests—like when people making slightly more than minimum wage protest minimum wage increases. Preserving one’s relative social standing feels more important than any absolute gain.

“The sad truth is that the logic of sexual selection ensures that life remains a zero-sum game even when it doesn’t need to be,” writes Von Hippel.

At a group level, our drives to be antisocial or “prosocial” are affected by the environment. Von Hippel suggests that whether a community has more dictatorial or more egalitarian leaders depends, in part, on external factors like the availability of resources and threats of violence from outside—which can be trumped up further by self-serving leaders.

“In principle, cooperation has the potential to make us more peaceful, but it turns out that our cooperation is highly selective; we evolved to cooperate with our fellow group members, but not with members of other groups,” Von Hippel writes. So, while our ability to cooperate with each other is what helped us thrive as a species, it also has its limitations.

The evolution of happiness

One question Von Hippel explores at length is why people feel happiness. Since evolution doesn’t care if we’re happy or not, he says—it only cares that we pass along our genes—what does happiness do for our survival?

Apparently, happiness somehow communicates our viability as a mate of high social status, since people like to be around happy people and tend to think happy people are more competent. That’s why we are often reluctant to share unhappy feelings with others and why we may even deceive ourselves about how happy we are.

So, if being (or appearing) happy is good for us, why aren’t we happier—like, all of the time? Von Hippel argues that fleeting happiness may be better than constant happiness, because it serves our species’ need to keep stretching ourselves, making discoveries, and striving for better—which often involves difficulty or uncertainty—rather than resting on our (content) laurels.

Still, that doesn’t mean we can’t work on our happiness. After all, much well-being science is oriented toward developing not the fleeting emotions of happiness and pleasure but a more long-term sense of satisfaction through meaningful relationships and activities.

To that end, Von Hippel suggests some tips for cultivating happiness in today’s world—namely, cultivating mindfulness, accumulating experiences rather than things, cooperating and building community, learning new things, using your strengths, savoring happy moments, and prioritizing your happiness over the long term. Some of these involve countering our evolutionary urges, like the drive to always plan for the future or the wanderlust that would have us leave our communities behind.

Individual paths to greater happiness will vary, and being happy 24/7 is not possible, says Von Hippel. “Nevertheless, approaching happiness from an evolutionary perspective can help us achieve it, at least some of the time.”

And perhaps that’s the most important take-home from his book: Paying attention to how ancient drives affect us can help us understand our worst behavior and improve upon our best. After all, evolution isn’t dead and in the past: We are still a work in progress.