Teenagers. We’ve all been one at one time or another, and we probably remember how fraught those years were. Growing up is risky, there’s no way around it. But why did we, as teens, get pulled toward taking dangerous chances in the first place? And, now that we’ve grown up, how can we help the next generation of teens develop good judgment, especially when whatever we say seems to fall on deaf ears?

These questions are at the heart of Jess P. Shatkin’s new book, Born to Be Wild. Dr. Shatkin, a nationally recognized expert on child and adolescent psychiatry, has learned that giving kids dire statistics or telling them to just say “no” doesn’t work. Chronicling the latest research on the adolescent brain and effective parenting programs, he provides a path for parents, teachers, and others who want to help guide kids toward making better choices around risk.

I interviewed Dr. Shatkin about his book and what it has to teach us about the trials and tribulations of adolescence.

Jill Suttie: In your book, you write that research shows teens don’t actually think they are invincible to risk, like many adults assume. What are the consequences of this false adult belief? 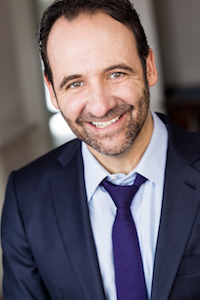 Jess P. Shatkin: Most health education programs targeting risk-taking behavior in young people are predicated upon the idea that kids think they’re invincible. Why else would young adults have unprotected sex, or drive so fast, or swim across the river when they’re drunk? They think their primary job is to remind teens over and over that they’re not invincible, and to explain to them what terrible things can happen to them if they engage in risk.

But our kids already believe that they’re far from invincible. In fact, they believe their risks are much higher than they are. For example, teens commonly believe that the risk of getting pregnant from one-time unprotected intercourse is 90 percent or greater—much, much higher than it actually is. As a result, our programs are targeting the wrong thing—a teen’s belief in their invincibility—and are not effective.

JS: If a sense of invincibility isn’t why teens take risks, what are the primary factors that contribute to teen risk-taking?

JPS: The research points to a number of things, which I articulate in the book. The first is the neuro-imbalance theory—this idea that the emotional part of the brain develops earlier than the prefrontal cortex, or they’re not wired together very well until later in life.  Because of that, adolescents take risks that most adults wouldn’t take—not because they think they’re invincible, but because emotions rule the day and they’ve got dopamine at very high levels in their brain. So, things are more exciting, more enticing to them. They are more driven by reward, and they want to go after things that have a high potential yield reward—like the thrill of the rollercoaster. But if you can’t take a rollercoaster ride, you can hit 100 miles per hour on a freeway or do drugs, and that’s exciting, too.

Now, this brain chemistry is evolutionarily advantageous to the species, because we need young, healthy risk-takers, who can run faster and tolerate extremes of temperature and pain. We need these adolescents to find new food and water sources, new mates. But teens also get sick and die in greater numbers, because of the behaviors they engage in, the emotions they feel, and the way they think about things. That’s the adolescent paradox.

JS: You mention that teens can benefit from learning emotional regulation and self-efficacy. What do you mean by these?

JPS: One of the major developmental milestones of becoming an adult is learning how to manage your emotions, so you don’t get fired from a job or ruin all of your friendships. We learn how to control our passion, and this is partly in line with the brain growing, the dopamine lowering, the hormones settling down, all those things.

But it also has to do with us growing up and learning and having more experience and building our repertoire of things that we can do when we feel upset or angry. Some of this just happens with maturation; but it can also be encouraged or taught.

Self-efficacy is about feeling powerful in this world, like you can have some impact. It may not be that you’re going to be an astronaut or the president; maybe you’ll do other things that matter and are important. You have to discover through trial and error what you’re good at, what you can commit to doing. That reckoning generally happens from about 13 to 30 years of age, and it can really empower teens when they figure it out. 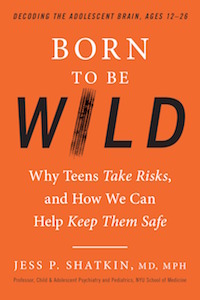 Born to Be Wild: Why Teens Take Risks, and How We Can Help Keep Them Safe (TarcherPerigee, 2017, 320 pages)

JS: Do you think teens should be taught these skills or should we focus on setting up an environment where that will happen naturally?

JPS: The answer is “yes” to both. We are built to develop this way; so, most of us—with some exceptions—will take on more responsibility and learn to manage our emotions and function better naturally.

But adolescence is a big transition, and there’s a lot more we can do. We’ve learned a lot in the last several years about practices that work. For example, when I grew up in the ’70s, I went to YMCA camps where they would teach kids progressive muscle relaxation and meditation. But it went out of style in the ’80s and ’90s because there was no real data for it—no evidence-based medicine. Well, now we’re getting some evidence that these practices actually work, beyond just subjective report.

We’re learning that exercise and arts programs in school really help our kids to learn better. A lot of this has to do with giving kids opportunities, coaching them, supporting them, mentoring them, tutoring them, getting the kids with disabilities—whether it’s learning or emotional disabilities—supports they need. The vast majority of kids with these problems don’t get that.

JS: Let’s assume teens haven’t learned these self-management skills. What can parents still do in the moment to help their kids make better choices?

JPS: There are lots of different kinds of tools. Parent management training, which I talk about in the book, is especially effective. That involves learning how to give kids a lot of positive reinforcement and to tell kids your expectations in a less ambiguous way. Though, to be really effective, it’s better to practice and teach those skills to parents of young children.

But let’s take something that you can do in the moment. One thing you can do is recognize that kids are driven by reward and that positive reinforcement works better than punishment. So, what parents want to do is identify things their kids want and steer them towards that.

I give an example in the book of an oncologist I know who can’t get teens to take their leukemia medicine, even though she tells them they’re going to die if they don’t take it. You want to flip that on its head. Ask teens: “What do you want? Do you want to drive one day? Do you want to get laid one day? Here’s what you’re gonna have to do to survive so you can do those things.” And maybe not say “one day.” Maybe there is something to do tomorrow, like going to the amusement park or going mountain climbing—something engaging for them.

I always encourage parents to look at what kids want, and support that, and use those as enticement, so that they move in the direction of what they want.

“Adolescents take risks not because they think they’re invincible, but because emotions rule the day”

JS: I know research says that parents are still very important to a teen’s healthy development and that teens long for connection with their parents. But what about parents who just get the silent treatment from their teens or whose teens avoid contact with them?

Still, I would argue that most kids want a satisfying relationship with their parent. When my daughter was 16—she’s now 19—she still liked to cook together or go shopping together. Even my 16-year-old son, who can be pretty irritable, still wants to take a bike ride with me or watch Game of Thrones together. There’s still an opportunity to go after the reward.

JS: What do you think schools could do to help more?

JPS: If you ask high school parents what they want for their kids, they say things like, “I want him to be a good citizen or fair-minded; I want her to be a team player and contribute to society.” They don’t say, “I want him to really understand Shakespeare or be great at geometry,” even though those are important things, too. But schools could purposefully teach character education more than they have in the past and give kids practice at building self-efficacy, by involving them in bands or sports, for example. When they do those kinds of things, our kids feel better about themselves.

A lot of schools let kids have their phones in school. That’s not useful. Students get distracted; phones take them away from other things they could be learning. It really does make a difference to pull kids off of technology for a few hours every day, unless they’re using that technology for school.

Schools should also be teaching media literacy. Kids get an awful lot of information from the media; but they’re unprepared to question it. They just absorb it. Take advertising: We can’t necessarily stop it in a free society, but we can teach our kids to be savvy consumers. I think that every kid should have a media literacy course in high school.