“You are unimaginably cruel. I could never have done something like that to you.”

One of my clients—we’ll call her Sara—received that in a nasty text from her ex-husband, who was angry because their daughter, a young adult, had excluded him from a milestone event. Instead of confronting their daughter, the ex-husband was pinning his daughter’s actions on Sara. 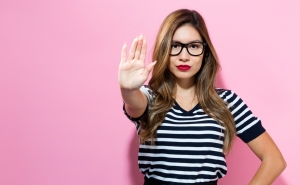 Even when we aren’t provoked by such high-emotion personal conflict, these days it’s hard to escape the daily dramas playing out all around us. Personal dramas are served to us via text and email—and if our own lives are peaceful, we need look no further than Twitter for President Trump’s conflicts, or our smartphones for the latest metaphorical (or literal) trainwreck.

Most of us are, at the very least, distracted by drama. Despite our best intentions, we have trouble looking away. Biologically, we are hardwired to love the novelty, stimulation, and social information that a constant feed of drama provides.

But the 24/7 drama isn’t pointing us towards meaningful lives. And it keeps us from the stillness and reflection and deep conversation that make our lives meaningful.

There is another problem with drama. Having a constant source of it leads us, unknowingly, to take on disempowering roles in our own lives, roles that hurt our relationships and foster feelings of powerlessness, shame, and superiority.

How does that happen? In 1968, a psychologist named Stephen Karpman developed a social model, the “Karpman Drama Triangle,” to map the dysfunctional behavior we predictably display when we get sucked into interpersonal drama. Karpman recognized how entertaining and addictive our relationship conflicts could be—despite being psychologically harmful.

Karpman teaches that there tend to be three roles in a conflict, hence the formation of a triangle:

All of these roles are tempting because they give us a sense of power (even if it is false power). Victims get to claim innocence, they gain the doting attention of their rescuer, and they avoid taking responsibility for their own lives and their own outcomes. Persecutors get to sit in the power seat, feeling superior.

Rescuers feel righteous anger and empathy, and so they also get to feel superior to both the victim and the persecutor. And while rescuers avoid the negative shadow that hangs over victims and persecutors, the rescuer role is not healthy, either, because focusing on someone else’s conflicts is usually an excuse to ignore their own problems. Rescuers usually have a stake in keeping the victim feeling helpless and weak. In the end, the rescuer keeps the victim feeling like a victim by giving them permission to avoid changing or taking responsibility for their own lives.

These roles are so ingrained in our cultural milieu that we don’t even see them; we just seamlessly (and unconsciously) step into them. But they are like junk food, providing only temporary stimulation and a quick shot in the arm of power, leaving us weaker in the long run.

So, what can we do instead of taking on these dysfunctional roles?

When Sara got that nasty text from her ex-husband, he was playing a victim role, while making Sara the persecutor. (He had engaged a mutual friend as a rescuer, who was also texting Sara, encouraging her to help her ex repair his relationship with his daughter).

Sara needed reminding that getting involved in a drama like this is always a choice. One option was to just ignore her ex-husband’s nasty text, or opt to send her ex-husband straight to the source, telling him to please talk to their daughter directly. And then Sara could silence the text conversation on her phone.

Having been pinned as a villain, Sara understandably had a hard time not engaging.  She felt that ignoring the texts coming in by the dozen would only make her ex-husband more justified in his anger. She wanted to defend herself against his unfair accusations.

Perhaps the most important stress-reduction tactic that anyone has ever taught me is not to believe everything I think. For Sara to stay out of the Karpman Drama Triangle, she would have to question her belief that things would get better if she tried to fix the situation—if she swapped her persecutor role for a rescuing one. I find The Work of Byron Katie, whose simple strategies are similar to cognitive behavioral therapy, works well when we need to question our thoughts and assumptions.

3. Take on a different role in the conflict

We can also always shift the role we are playing in a conflict from a dysfunctional one to a constructive one.

Sara ultimately decided not to try to protect her ex-husband from the truth by making excuses for their daughter, nor did she try to placate him with pictures from the event. By telling the truth, she’d become a challenger instead of a persecutor. And by refusing to soothe and placate, she declined to be a rescuer, even though this made her ex very angry.

She did offer to take on a coaching role, by asking her ex what type of relationship he wanted with their daughter, and then asking him how he might take steps to get there—but he wasn’t actually looking for coaching or to create a new relationship with their daughter. In the end, because he wasn’t getting what he wanted out of Sara, he kicked her out of his drama triangle, leaving her alone in peaceful silence.

For Sara, that silence was a blissful ending to a painful conflict.