On an individual level, we can forgive ourselves or we can forgive others. Self-forgiveness is the experience of getting successfully past self-condemnation by responsibly dealing with our shortcomings and restoring a healthy sense of self. For some, it is important to feel forgiven by God or a higher power. Forgiving another person can be seen as a victim’s altruistic and loving response to an offender’s injurious act. 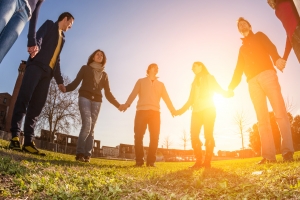 Research suggests that these acts of individual-level forgiveness carry enormous mental and physical health benefits. Numerous studies have documented that forgiveness can reduce stress hormones, and it may improve both immune-system and cardiovascular functioning. In addition, forgiveness reduces rumination and associated depression, anxiety, anger, obsessive and compulsive cognition, and even psychosomatic illness. Forgiveness also improves relationships—and many studies show that the quality of our relationships is the single best predictor of happiness.

Is it possible for these benefits to be felt by groups, organizations, communities, and entire nations, regions, or cultures?

Community forgiveness—and on a larger scale, societal forgiveness—is a collectively embraced decision to change negative behavior, thoughts, feelings, and motivations toward an offending group or groups of people. Community injustices vary greatly in their nature. Some affect a small portion of the community; others touch the lives of virtually all members. Some community offenses are minor and others are quite severe, even life-threatening. As such, community forgiveness is a process that unfolds within a particular place and time.

Can we make forgiveness more possible and likely within a specific community—within individuals, between them, and in relation to another community? Two separate studies show that it is possible to foster forgiveness in communities. Both employed two-week forgiveness awareness-raising campaigns that used methods such as public lectures, student newspaper articles, debates, panels, group discussions, and small-group education. The studies show that these campaigns helped community members replace negative thoughts, feelings, and behaviors with positive, generous, and loving ones.

In a recent study, we found that even a short forgiveness campaign can help community members (as individuals) feel more forgiveness, more love, and less conflict. Our previous community interventions focused on mere awareness-raising through workshops and other kinds of education. However, by doing those studies we recognized that raising awareness did have a positive effect on changing people’s dispositions to forgive.

A campaign for forgiveness

For our new study, we ran a two-week community campaign to promote forgiveness at Luther College in Decorah, Iowa.

We began by offering representatives of the community—including faculty, staff, leadership, and students—a list of activities that other schools, churches, or community groups had employed to raise awareness and create opportunities for members to forgive. These included activities needing much administrative coordination, such as chapel talks, guest speakers, debates, public forums, meetings to discuss forgiveness and social action, college social media posts, blogs, and student newspaper articles.

But they also included things students, faculty, and staff could do on their own, such as email blasts, class assignments, creating websites, watching TED talks, and praying for one’s “enemies,” as well as group activities (such as movie nights and dorm discussion groups) and student competitions (such as essay contests). A task force of student leaders, volunteers, faculty, and staff selected some of these activities and created their own original forgiveness campaign materials.

We offered two types of student-led therapeutic group interventions for those who wanted to do a deeper dive into forgiving a specific wrong in their own lives and become more forgiving people in general. These groups met during two consecutive weekends for a total of six hours. During their meetings, groups were led by pairs of students trained in delivering two different types of forgiveness education. The first approach was Everett Worthington’s REACH Forgiveness method, where participants were taught to:

The second approach was Frederic Luskin’s Forgive for Good method, where participants try to reframe the experience of victimhood and transform it into a story of resilience. Participants also learned stress relaxation techniques to help modulate the stress and anxiety that accompanies thinking and working on hurtful events from one’s past.

Whether the campaign promoted forgiveness within any specific relationship depended upon the initial state of that relationship, like how forgiving the relationship was before the campaign. Students tended to forgive more, feel less conflict with, and feel more love toward their teachers than in their other relationships.

Because the interventions were distributed across the entire student body of Luther College, the entire community—as a collection of individuals—became more forgiving. If the research on the benefits of forgiving holds true, that should result, down the road, in those students being more physically and psychologically healthy, relationally well-adjusted, and perhaps spiritually more settled.

The public health implications of this kind of campaign, if it were to be scaled up beyond one college campus, could be profound. Research shows that forgiveness interventions lead people to become more forgiving for every hour they spend attempting to forgive. Amazingly, without mentioning psychological or physical health, these programs also lead people to become less depressed, less anxious, and more hopeful!

In the Luther College Community Forgiveness Campaign, public offers to think about or attend forgiveness groups, movie discussion groups, debates, and discussions engaged some people for 10 or more hours and other people not at all. The average time participants spent engaging with the campaign was about 2.5 hours of accumulated exposure over the two weeks, yet people still saw real changes in their tendency to forgive and likely realized benefits to their health.

True, this is a self-contained, moderate-sized liberal arts college. Yet just imagine what might happen in communities as large as New York City, Chicago, Atlanta, Houston, or Los Angeles if even a small proportion of their millions of citizens became engaged in groups, churches, public meetings at libraries or community centers, friendships, and families that helped each other consider becoming more forgiving.

How much impact might this have on physical health, psychological health, relationship conflict, workplace discord, and changed attitudes towards other groups?

Promoting forgiveness in your community

Perhaps you live in a community that might need to embrace forgiving. Religious communities are fertile ground for forgiveness campaigns simply because most religious people already value and try to practice forgiveness. But virtually all communities who value forgiveness can benefit.

How hard is it? Not as hard as you might think. With shared vision and community motivation, you can use some of the following strategies in community forgiveness efforts. 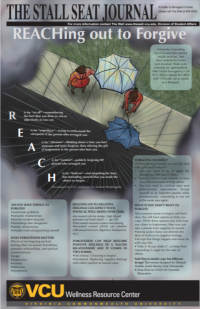 1. Raise awareness. A common first step is to begin awareness-raising on the issue of forgiveness. For example, at Virginia Commonwealth University, The Stall Seat Journal—a wellness flier posted in bathrooms—has been used to educate students about forgiveness and practical ways of forgiving.

But the goal is not necessarily to blanket a community with promotional advertising. Rather, awareness-raising might be aimed at educating and motivating members to learn about forgiveness, its benefits, and how to experience it—or to merely discuss it with others.

2. Get help. Though it might be tempting to create your own forgiveness campaign, your community might be best served by using evidence-based interventions aimed at experiencing forgiveness, like REACH Forgiveness groups, do-it-yourself workbooks, online interventions, and book or movie discussion groups.

Regardless of how respected the local leaders are, community work is often done best when it invites participation and contribution from all corners of the community. Keep in mind that your community may not have all the answers and looking to other communities as examples, inviting forgiveness experts, and developing the breadth and depth of expert organizers, counselors, and other professionals makes for a more effective and sustainable approach.

3. Tailored interventions. It might seem that community forgiveness interventions should apply widely across many different communities, but in truth no one-size-fits-all learning experience exists. In younger communities and developed nations, the use of social media outlets—YouTube, blogs, Facebook, Twitter—could be effective tools to engage people to spend time learning about forgiveness or just trying to forgive. In other communities, such as tribal communities in Africa or collectivistic cultures, shared storytelling may be highly valued and an effective tool.

For instance, Fambul Tok is a community forgiveness initiative that was used in Sierra Leone to promote forgiveness in the wake of the trauma and atrocities resulting from their civil war. Regularly occurring forgiveness-themed stories were also used in Rwanda in recovering from that country’s genocide. Some members of a community may wish to participate passively, for instance, by attending a community presentation or movie discussion group. Others may wish to participate in formal training on forgiveness. Still others might want to organize a debate or invite community leaders from two opposing groups for shared discussions.

In some cases, like with the South Africa Truth and Reconciliation Commission’s nationally televised hearings, a public event can focus an entire nation’s attention. Allow options for community members to match their level of interest with involvement.

4. Evaluate. Good intentions do not necessarily result in good outcomes. That is why it is critical to find appropriate methods of evaluating community forgiveness programs.

So again, consider bringing in experts to work with community leaders in a way that can establish baseline measurements, evaluate change, and determine whether real and meaningful progress has been made—in a way that the community leaders can understand. Be prepared to find that not all community members respond uniformly positively to forgiveness interventions.

Forgiveness is hard work for everyone and considerable differences exist in people’s readiness for positive change in their lives. Keep in mind that effective forgiveness interventions will likely produce improvements in health and well-being, and these outcomes are important to measure, as well. Don’t forget to share results with the community, request feedback, and seek to identify strengths as well as areas of improvement.

A significant part of human history has been written about communities, groups, and nations in conflict. Unfortunately, the case remains the same today. As the world becomes increasing nationalistic and one-time allies and friends become competitors and threats, the need for forgiving communities and nations has never been greater.