Imagine the following scenario: Your eight-year-old son is repeatedly poked with a pencil by his classmate at school. How does he respond? 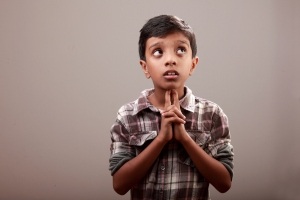 He might endure the pokes without complaint by using willpower, or he might stay silent, succumbing to feelings of fear or powerlessness. He could lose his self-control and act out, attacking his classmate verbally or poking him back. Or does your son “self-regulate” by considering his options and resources, taking stock of his feelings and strengths, reflecting on past experience, and responding deliberately?

Self-regulation may sound like a tall order—but it’s also the best choice, according to Erin Clabough, a neuroscientist, mother of four, and author of the book Second Nature: How Parents Can Use Neuroscience to Help Kids Develop Empathy, Creativity, and Self-Control. Self-regulation is a skill that we need whenever we want to make a good choice or work toward a goal, especially when strong feelings are involved—in ourselves or others.

Unfortunately, the qualities that support self-regulation are on the decline among American children. Self-control in young children has regressed by two years since the 1940s. (On the same task—standing still while not moving—today’s seven year olds perform the way five year olds did earlier, and today’s five year olds perform like the earlier three year olds.) Empathy has declined among college students over 30 years, and creativity and critical thinking have declined over 20 years, especially among children in kindergarten through third grade.

If we want to live in a civil, peaceful, and productive society, interrupting those trends is imperative. In her book, Clabough weaves developmental neuroscience with anecdotes from her family life to explain how parents can help children cultivate empathy, creativity, and self-control, and more importantly why they should. Together these qualities support a child’s ability to self-regulate in a balanced way, leading to greater personal fulfillment, better relationships, and enhanced success in life.

Over the course of the book, Clabough draws a distinction between the multi-faceted self-regulation and self-control.

Self-control has received a great deal of attention following the famous “marshmallow test,” which has been cited for decades. In this classic 1970 study, 1,000 four to six year olds were given a small reward (one marshmallow, pretzel, or cookie) but could choose not to eat it and wait for a larger reward later (more treats). Longitudinal studies showed that the children who could delay gratification had higher SAT scores in adolescence and better health, higher income, and lower crime rates 40 years later. The ability to delay gratification in early childhood was a better predictor of later success than intelligence or social class.

In addition, Clabough argues, self-control is an incomplete goal, because it’s ultimately about not acting—something parents and teachers might find desirable in children, but not the only key to success in life. Self-regulation, on the other hand, is about taking action, she says, and teaching it should be a parenting goal.

Someone with good self-regulation does have self-control and can, for example, stifle an initial gut reaction when necessary. But they also use creativity and empathy to consider alternative avenues that can help them accomplish their goals. They consider rules, but they also might creatively reframe them or invent new ones. In order to decide on an action, they take into account their own feelings and concerns, but they’re also empathic and consider other people’s perspectives in complex social situations.

For example, your son who is being poked might first read the other child’s motivations—is the poking in fun and a continuation of recess play, is it a distressed call for help, or is it taunting and part of a bullying pattern? What are your son’s goals—does he want to continue the fun, is he trying to concentrate, or does he need help? Creativity allows him the freedom and flexibility to respond with a joke, or assert a boundary, or involve an adult; self-control allows him to thoughtfully make this choice rather than instinctively react.

In other words, children with good self-regulation are aware, flexible, and creative—and, importantly, they are empowered to reason for themselves. “Self-regulation is a much bigger deal than simple self-control,” writes Clabough. “It’s not just the ability to pause behavior, but it’s having the flexibility to pivot behavior…the ability to blaze a trail toward a goal, while still preserving trust and reciprocity in those around you.”

With greater self-regulation, not only will children be more psychologically healthy, but they’ll also be more altruistic, kind, and connected with their community. And, Clabough writes, they can also expect greater academic success, a “career boost,” and “greater competitiveness in a global economy.”

Self-regulation in the brain

Second Nature is probably the first, most applicable primer on brain development for non-scientists that neither overwhelms nor oversimplifies. Clabough describes stages of brain development to help parents have more appropriate expectations: What are children capable of, neurologically, at different ages? Which limitations can be gently stretched, and where do children need extra support? For example, she reports that while play in early childhood is important for creativity, today’s kids have fewer opportunities to play in early childhood classrooms, a trend that should be reversed. 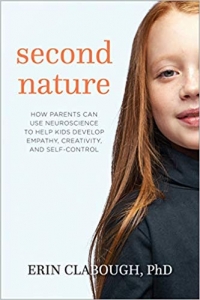 Clabough describes parenting approaches grounded in developmental science, including scaffolding (providing a framework or template for children to learn and practice new skills) and modeling (demonstrating self-regulation as a parent), along with supporting children’s autonomy and helping them reflect on their experiences. My favorite chapters in Second Nature are the how-to’s, in which she offers specific parenting guidance, hacks, and shortcuts. For example, she points out that brain cells that are working hard to maintain self-control use glucose at a faster rate, so one tip is to “feed your tantrum-thrower ASAP.”

She even points out how power structures affect self-regulation: Long-held privilege can erode empathy, making it harder to consider someone else’s point of view, while chronic disadvantage can be harmful to children. In her own family, she finds ways to switch up and equalize the power dynamics among the siblings—for example, by letting the youngest dole out treats or speak first, asking an older sibling to teach a younger one, exposing her children to different cultures, and encouraging friendships across ages and groups. This kind of sensitivity makes the book feel especially thoughtful and expansive.

Once in a while, Clabough strays into territory where scientific opinion varies or isn’t available yet. For example, she suggests that children who are bullied should “find a grownup,” but the current research doesn’t support such a simple approach. (We know that some grownups aren’t sympathetic or skilled and that most teenagers don’t want to turn to a grownup.) Instead, today’s research points to two key solutions to bullying: developing social and emotional skills in children and adults, and creating a positive school climate.

Additionally, Clabough advises parents to confront other people’s children, or intrude in children’s social networks, to help set ground rules for their interactions—but a larger, more nuanced discussion is needed there. She also champions one or two social and emotional learning (SEL) programs that cultivate mindfulness without exploring the benefits of other SEL programs that have been proven to enhance self-understanding and social skills along with self-regulation. (Full disclosure: I have an affiliation with the Yale Center for Emotional Intelligence.) I am heartened, though, by Clabough’s suggestion that children and adults alike should learn how brains grow and develop. Adults can only teach what they understand and embody, and the field of developmental neuroscience is rapidly advancing.

Empathy, creativity, and self-control are strengths that can be learned. And when they’re taught with respect for a child’s autonomy and decision-making capacity, they can support lifelong well-being. By nurturing these traits in our children, Clabough writes, “we will raise creative thinkers who get things done in a way that benefits others as well as themselves.”