I was looking at Mother’s Day cards recently and found a couple that made me chuckle. One suggested a cape as a gift for a super mom. The other had a presidential seal for the mom-in-chief. Their common theme? The idea that moms need nerves of steel. 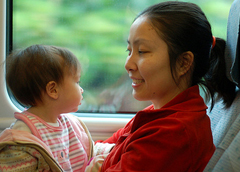 Motherhood brings incomparable joys, but without a superpower or the full staff that comes along with the top job of the executive branch, some moments can be overwhelming. Indeed, a recent study of over 260 French mothers found that 20 percent of them reported maternal burn-out.

What helps? You can’t always avoid stress, but a new study by Cynthia Smith and Alise Stephens suggests that cultivating positive emotions may buffer moms from its impact on their parenting.

The study included almost 100 mothers (mostly European American, married, and college-educated) at two time points: once when the children were four to five years old and again four years later when they were eight to nine years old. When children were younger, moms completed questionnaires about their parenting stress and the researchers measured positive emotions as they observed mom and child at play. At both younger and older ages, Smith and Stephens also measured how sensitive moms were to their children—the degree to which moms responded appropriately to their children’s signals—during play.

Why would this be the case? “Positive emotions allow individuals to build up more resources over time,” write Smith and Stephens. “Despite reported feelings of stress, mothers who were higher in positive [emotions] may have been able to draw on these resource reserves when interacting with their children.”

Many other studies echo this finding. In a recent review of the research, Barbara Fredrickson and Thomas Joiner sum up the science to date: “Momentary experiences of mild, everyday positive emotions broaden people’s awareness in ways that, over time and with frequent recurrence, build consequential personal resources that contribute to their overall emotional and physical well-being.”

Although parenting stress may be ever-present, this research suggests that building up positive emotion reserves helps moms to support their kids without sacrificing their individual well-being. But how can they do that? Here are some suggestions.

In a 2015 study, Margaret Burkhart and colleagues found that relational savoring—that is, deeply focusing on positive moments shared between parents and children—increased parents’ good feelings and their relationship quality with children.

How does relational savoring work?

According to the study’s instructions, begin by thinking “about a positive emotional experience you have had with your child. This could be something as simple as going to the park together or laughing over a funny joke, or it could be something as major as taking a vacation or accomplishing a big task together.” You should try to focus on a memory of a specific time when things were at their best between you and your child.

Next, write about the details: the weather, the time of day, clothing both you and your child were wearing, your emotions, and your thoughts both then and now. At the end, spend a couple of minutes mentally reliving the memory.

“One way that individuals might prioritize positivity within their daily routines is by maintaining a regular meditation practice,” write Barbara Fredrickson and colleagues in a recent study of people who attended workshops in either mindfulness meditation or loving-kindness meditation. Even weeks later, participants felt more positive emotions than they had before.

It makes sense that either of these two meditations may work to capture moments of positive emotions because mindfulness involves paying careful attention to the present moment and loving-kindness aims to “self-generate warm and friendly feelings.”

3. Give thanks for the small stuff

In a recent research review on the science promoting strengths and resilience among single moms, Zoe Taylor and Rand Conger encourage gratitude practices as a way to cultivate “strengths of the heart.”

Keeping a gratitude journal in which to write about small or big gifts in your life for which you are thankful may be one way to enhance feelings of positive emotions. Rather than a list of many things, write about a few specific interactions with people for which you feel thankful. These may include tender moments with your children. Aim to make routine gratitude journal entries occasionally, at least once a week.

Another greeting card had a picture of a mom lying down for a nap on the couch with a message inside that said, “Time to relax and enjoy Mother’s Day!” This is my wish for you, too.