Penny Lancaster and her husband, rocker Rod Stewart, had been together 14 years when something happened that neither of them expected: menopause. 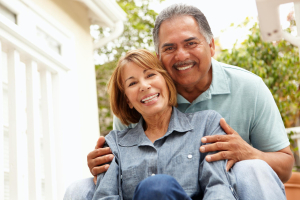 Not that the English model, photographer, and TV personality didn’t know that at some point her periods would end. It’s just that nothing prepared her—or him—for how her symptoms would impact their marriage.

“Rod was worried for me. We’re honest and talk openly about everything, but I didn’t know how to explain why I was feeling the way I did,” she told HELLO! magazine.

Stewart was as perplexed as she was.

“It was frightening because she really wasn’t the person I married,” he said. “We talked it through and I think that’s what couples have to do. Men have got to get on with it, understand, and come out the other end.”

Still, understanding and coming out the other end may be easier said than done.

That doesn’t mean couples shouldn’t try. In fact, they must. Otherwise their partnership is going to be tested in ways it may never have been tested before, possibly leading to unhappy results. For men, the process starts with education—and hopefully concludes with becoming their partner’s ally in the journey through menopause.

The median age in the United States for reaching menopause is 51, but studies indicate Black, Latina, and some Asian women hit menopause earlier. Many more Black, Latina, and Native American women report experiencing vasomotor symptoms than white women do, and for much longer, according to the Study of Women’s Health Across the Nation, a longitudinal study of women across ethnicities. And Latina women report feeling more embarrassment over those symptoms.

Women are often at a loss about what’s happening to their body as they start to transition. Sadly, all too often their health care provider can’t offer much guidance. According to a 2018 survey of family medicine, internal medicine, and obstetrics and gynecology, residency trainees say they had about one or two total hours of education about menopause, max, and some 20% said they’d had no menopause education at all. None! This is one of the most major health events in a woman’s life, and it’s very likely her health care provider knows little to nothing about it, and how to best help her.

If women’s health care providers feel unprepared in advising them, and women struggle with understanding menopause themselves, how can they expect their male partners to understand and support them? Or at least not get frustrated with them, which just further complicates an already often confusing and taboo process that is still considered a big bummer.

And menopause is a big bummer for many women. There’s a lot of shame, stigma, and misunderstanding around it, just as there is around menstruation—and that affects what women think and how they act. When women were younger, they worried about leaking when they got their period. At midlife, they worry about having a hot flash during an important presentation at work, or at a parent-teacher conference, or on a date, leading women to be hyper-vigilant, self-consciousness, and self-monitoring. It can be exhausting, not only for them but for their romantic partners.

No wonder Rod Stewart and millions of other men might feel confused.

According to one study, men whose partners were experiencing some of the symptoms of menopause said they were more negatively affected by the symptoms than were their partners—an interesting factoid, for sure, even if we might think these men are more than a little self-serving. More than half also said it was putting a strain on their relationship. The sweating and hot flashes didn’t bother them as much as their partner’s moodiness; in fact, the same study found that if they were going to explain menopause to another man, nearly 22% would point out the moodiness and irrational behavior.

While a third said they were trying to be more patient, supportive, and compassionate toward their partner, 11% said they were trying to avoid the whole thing. In another study of 96 husbands, most said they had some information about menopause—mostly gleaned from their wives—but more than one in four admitted knowing little or nothing about it. A third didn’t think they were being all that supportive, but the majority thought they were able to offer emotional support.

And in yet another study, wives felt more positive toward menopause than their husbands, even though they said they were experiencing more menopausal symptoms than their husbands thought they were having. But the big takeaway is that for both the husbands and the wives, having a positive attitude toward menopause was “associated with women who reported fewer menopausal symptoms.” (In fact, thinking negatively about menopause can lead a woman to have more frequent and more intense symptoms.)

Clearly, men need help understanding menopause beyond just their female partner’s symptoms, especially since it has huge impacts on her physical and mental health, and even life expectancy. The first step is to just take the time to learn about the facts and experience of menopause.

“It’s remarkable how little men know about menopause,” says Dee Murray, founder of Menopause Experts Group, a training program started in 2021 to help men be more aware of menopause. “We can’t blame men for not understanding menopause. It’s surprising how many women I speak to don’t either, how many younger women are unsympathetic towards those in middle age. It’s one of those messy bits of female biology that society prefers to hide away, and especially from men.”

How men and women can talk about menopause

Still, if Lancaster and Stewart can talk it through and “come out the other end,” it seems pretty likely that other couples can, too.

That’s why Omisade Burney-Scott, creator of the Black Girl’s Guide to Surviving Menopause, an online space, podcast, and zine seeking to normalize menopause through storytelling, created Say More, a collection of conversation and journaling prompt cards, in collaboration with Kindra, an e-commerce business focusing on menopausal women. It isn’t a tool just for couples, but it’s certainly a way to start and continue conversations. As Burney-Scott says:


Of course, rather than wait for the person experiencing hot flashes and night sweats to bring it up, male romantic partners can take the initiative and learn about menopause themselves.

“It’s always a good idea to know what’s going on with your partner and their health condition and try to be supportive,” says Dr. Jen Gunter, an OB-GYN in the San Francisco Bay Area and author of The Menopause Manifesto. “Not everybody wants to talk about their health with their partner. It’s good to be able to, but people have different kinds of relationships. But most partners want to be supportive and know what’s going on.”

Before anyone chalks up irritability or moodiness or a lack of sexual desire to menopause, however, Gunter hopes couples would consider what else is happening in the relationship:

Menopause doesn’t happen in a vacuum. I see a lot of patients who are running around and doing everything and they’re not only working full-time and looking after kids and doing all that stuff, and if you’re doing more than 50% of the emotional labor and all the things around the house, those are also reasons to be moody and upset.

“I think it’s a good time for male partners to reflect on how they have been treating their loved one,” she adds. “How much of this is, I’m fed up with you not helping?”

In other words, there’s a lot going on for women at midlife beyond hormones. And it’s also when the ageist, sexist narratives about middle-aged women—that they’re invisible, irrelevant, undesirable—can rattle even the most confident woman.

And that can play out in the bedroom.

“She’s lost her libido,” is a frequent cry of men whose female romantic partner is going through menopause.

Let’s be honest, sex can be frustrating or downright painful for menopausal and postmenopausal women. Things happen to the vagina—the vaginal tissue dries out and thins, the vagina itself can narrow and shorten, the pelvic floor muscles start freaking out, and a host of other unpleasantries, all of which can cause so much stress that it may prevent a woman from enjoying sex. So, it’s understandable if she starts to avoid it.

Menopause isn’t the only reason a couple’s sexual relationship could change. A woman could also lose interest in sex if she has health problems; if she’s depressed; if she’s on medication that impacts the libido, like some antidepressants; if she’s been physically or sexually abused, or both; or if her romantic relationship isn’t so great. Or even if she’s not getting a good night’s sleep, which is common during menopause.

It’s understandable if men in heterosexual, monogamous relationships feel frustrated by such changes. But there’s an alternative to becoming frustrated or angry or trying to “avoid the whole thing”: showing up as an ally.

“My advice is to listen more, hear what your partner is going through, and then approach it in a way of curiosity,” says Cathy Saputo, a certified sex therapist, in a Psychology Today interview.  She suggests some specific language for men: “Tell me more about what you are experiencing. Maybe we can do some research together to learn more about what to expect.”

When it comes to sex at midlife and later, couples often need to get creative, suggests Dr. Jane Fleishman, a certified sexuality educator, researcher, and writer who focuses on the sexual wellness of older adults.

If menopause is making intercourse uncomfortable for a woman—perhaps at the same time that her male romantic partner is struggling with getting and maintaining an erection—it’s a good time for a couple to expand their definition of “sex” and how they can both be pleasured, Fleishman tells me.

Maybe it means bringing sex toys into the relationship. “Fortunately, we’re living in a period where these sex toy companies are producing really interesting products to help people with disabilities, trans people, people with older bodies,” she says. “We can avail ourselves of those.”

Maybe fantasy play or even a little kink would help. Maybe more lubricant is needed. There may be some hesitancy to try something new or different, she acknowledges. “It takes energetic discussion to bring these ideas into your sexual life,” Fleishman says. A certified sex therapist can help, as well.

Men don’t have to wait for their romantic partners to start experiencing symptoms or even bring it up first; if she lives long enough, she’s going to go through this very natural transition and so men can learn about it themselves. The more men know about menopause, the more it will boost their romantic partner’s relationship satisfaction. Everyone can benefit from that.