Are you happy with your romantic relationship? 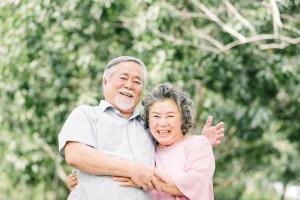 On Valentine’s Day, around anniversaries, and in the dark lull before sleep, maybe you’ve pondered this question. You might have thought about how you met your partner, what you’ve been through, and how they’ve changed—or just how they got on your nerves that day.

It turns out there are a few other important factors that may influence how you feel about your relationship: how old you are and how long you’ve been together. In fact, in a new paper, researchers mapped out the relationship satisfaction of more than 165,000 people around the world—and they saw distinct up-and-down patterns as couples moved through life.

The results may offer conflicting clues about the patterns in your own relationships. According to this study, both age and the length of the relationship matter to how satisfied we are—although age seems to matter more. In other words, you might indeed find yourself happier with your mate at certain points in your life than others—and this might have less to do with them than with your circumstances.

How satisfaction waxes and wanes

Because previous findings on relationship satisfaction across the lifespan have been mixed, researchers at the University of Bern decided to do a “meta-analysis,” looking at findings from 95 papers to see if they could paint a clearer picture. Most participants were from the United States, although some were from other countries like Canada, Germany, and China. They were mostly white and mostly involved in heterosexual relationships.

The researchers found that relationship satisfaction tends to decrease from age 20 to age 40. From that low point, it typically increases until age 65, and stays relatively stable for another 10 years or so (the oldest participants were 76 years old). 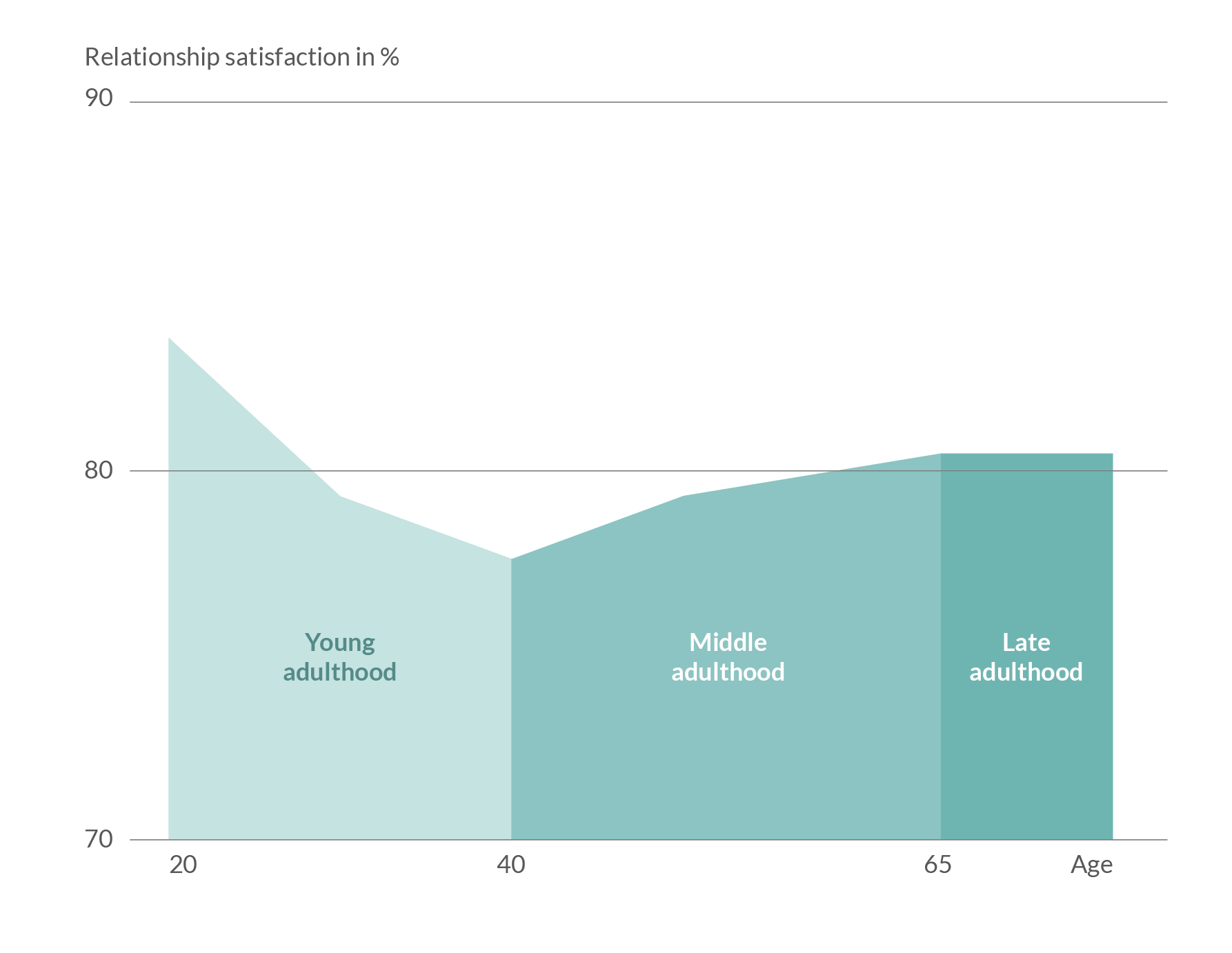 When they analyzed relationships by length, the pattern was slightly different. Couples usually become less satisfied during the first 10 years, but their satisfaction rebounds and increases for the next 20 years, and decreases again after that. 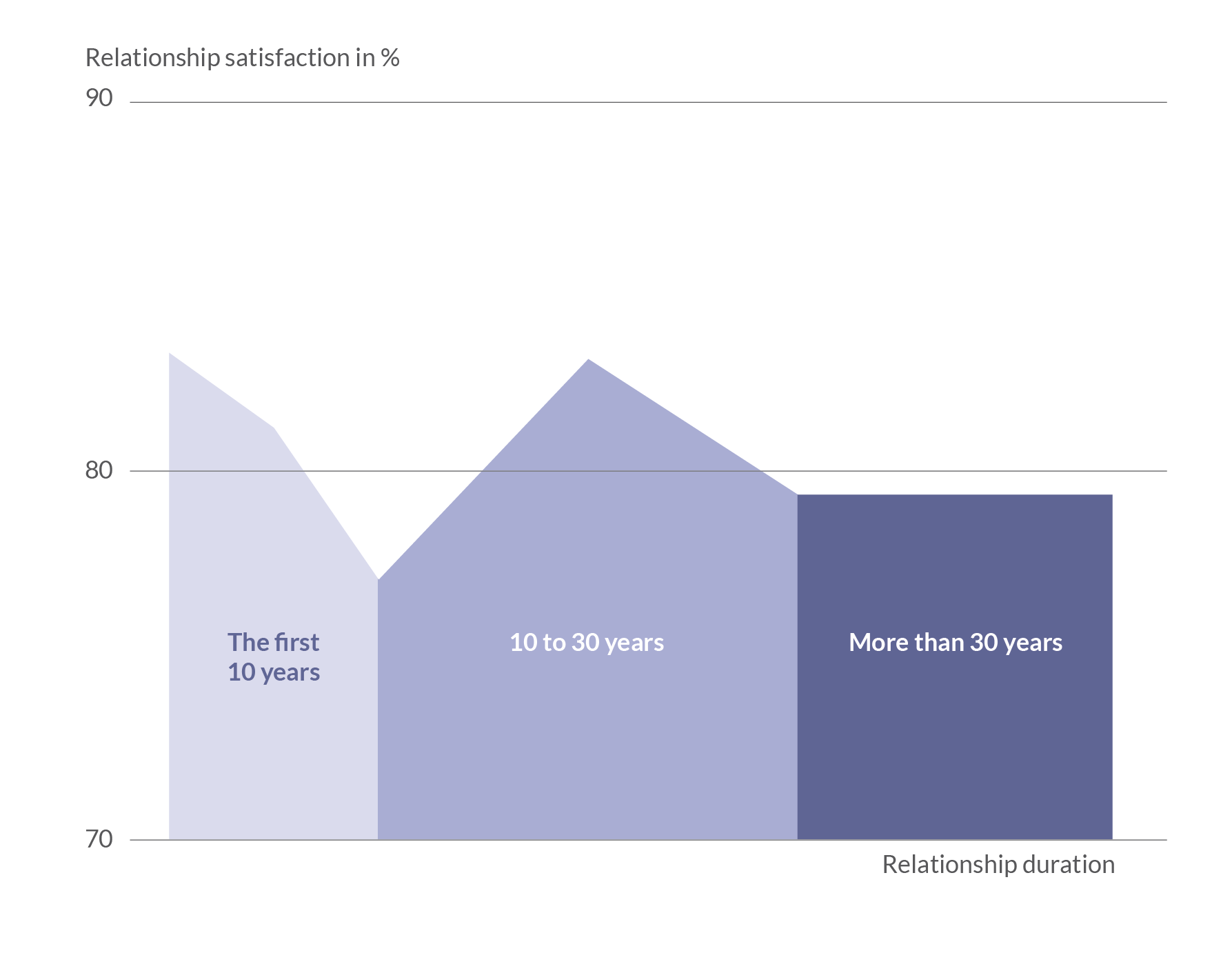 The trajectory of love

Why are we least happy with our relationships around age 40, but get happier toward retirement? The researchers didn’t have enough data to explain these patterns, but they did offer some ideas.

The midlife crisis is a real phenomenon, with happiness levels dipping around this time, and this study suggests it might apply to our romantic lives, too. In middle age, we may be juggling busy work hours, while trying to raise kids and care for aging parents. The current findings did suggest that parents tend to be less satisfied with their relationships compared to partners without kids.

At the same time, the sense of possibility and open horizons that comes with being young may be lost for adults. If we haven’t achieved what we hoped by a certain age—in our lives or in our relationships—we may feel disappointed and disillusioned, the researchers suggest.

After 40, a few different things might happen. We may get divorced and start a new, happier relationship—or we might make peace with the partner we have, realizing there aren’t infinite options out there. When kids leave for college, couples might reconnect in their empty nest. And the older we get, the more emotionally stable we tend to be. It might become easier to appreciate the loved ones we still have in our life, and to make our time with them more pleasant.

The researchers also speculated about why satisfaction follows a predictable trajectory within relationships. Over the first 10 years of a relationship, the researchers explain, couples may invest less and less time and energy in communicating, having sex, and spending time together. The desire for an ideal partner who meets all our needs may come face to face with the reality of a fallible person who can’t be everything to us. So it may not be surprising that the high of falling in love can’t be sustained forever.

Interestingly, their findings coincide almost perfectly with the notion of the “seven-year itch,” based on research that people are most likely to split up around seven years of marriage (since most couples get married a few years after they meet).

But couples who make it past this point might end up with a sense of strength and resilience, a feeling that we’re in this together—which could explain why satisfaction rebounds after 10 years, says the study’s first author, Janina Larissa Bühler, an assistant professor at the Johannes Gutenberg University of Mainz.

If this research has put a damper on your romantic mood, not to fret, the researchers urge. Even when people’s satisfaction declined to its lowest levels, it was still relatively high—a 77 on a scale of 100. And satisfaction isn’t the only aspect of a relationship that keeps people together; even though you’re less satisfied at times, you can still be committed.

“I think we have to accept that relationship satisfaction changes and it’s absolutely OK that it changes,” says Bühler. “It’s OK to be less satisfied at a point in the relationship, and this doesn’t mean to resign or to do nothing anymore for the relationship—but to not constantly compare ourselves to how happy we assume other people are.”

These are averages, too; your relationship journey may look completely different. In the future, Bühler hopes to study what aspects of people’s personalities might make for smoother or rockier relationships—things like our emotional stability, self-esteem, attachment style, or openness to growth and change. This kind of research could help therapists and other practitioners offer the best advice and resources to couples at different ages and different relationship stages.

But if you do find yourself feeling less happy about your relationship after a decade or during midlife, it might be comforting to know that that’s completely normal—and that it might be better to wait out the hard stuff together.