I’ve always been captivated by Plato’s myth of Aristophanes. Once upon a time, he recounts, humans existed as double beings, with two heads and four arms and four legs. We were so powerful in this form that the gods felt threatened and cut us in half, creating humans as we know them today. Yet we long for the wholeness of our former state, which explains how fervently we seek love and connection.

The idea of being cosmically entwined with another human being might make for a romantic tale, but even science sees this interdependence. Research has shown that couples’ levels of happiness and health tend to converge, particularly among the elderly. We may even incorporate our partner into our sense of self. 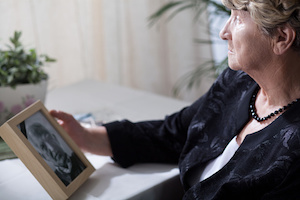 And a new study, published in Psychological Science in February, found that this interconnection survives death.

Researchers from the University of Arizona examined a multi-year survey in which more than 3,000 European couples ages 50 or older reported on their quality of life: a measure of life satisfaction and well-being reflected in statements like “I look forward to each day.”

At the beginning of the study, partners’ quality of life ratings were correlated—no surprise there.

After several years, some of the participants died, leaving about 550 widows and widowers who continued to participate in the survey. Running the numbers again, the researchers found that the survivors’ quality of life was still linked to their deceased partners’ quality of life before death. In other words, how well the widows and widowers were doing could be predicted by their lost partners’ well-being.

This was true even after controlling for the surviving spouses’ well-being at the beginning of the study, to ensure that the link wasn’t just a holdover. It also remained true after accounting for various factors that could influence both partners’ well-being, including their age, education, and marriage length, as well as circumstances like how long the partners had been ill for, how much time the spouses had spent as a caregiver, and how much social support they received during bereavement. (Because the partners died at different times, spouses were rating their quality of life up to four years after the death—but the timing didn’t have a significant effect on the results, either.)

Not only did this link exist, which is remarkable enough, but the researchers found that it was just as strong as the link between the other couples in the study—where both partners were still alive. Widowhood is obviously detrimental to happiness, but this meant that if a partner had had an above-average quality of life before dying, their widow tended to be doing just as well as the average non-widow.

What’s going on here? Nothing spooky or magical; in fact, the researchers suggest, there are several plausible ways that partners could still help their spouses even after they’ve passed away. First off, if the partner didn’t suffer much before death, their spouse might be able to more easily find peace and a sense of meaning in their passing. This is yet another reason why health care providers should focus on providing comfortable and dignified end-of-life care; it may affect not just the patient but their loved ones as well, for many years to come.

But more than that, the memory of a happy, resilient partner could give surviving spouses the inspiration to stay strong and positive. Remembering a deceased partner’s positivity under stress “might serve as a source of symbolic support,” the researchers explain. Widows may try their best to honor their partner by keeping up a bright and optimistic attitude.

Memories of a past love are so tangible and powerful that they become another force influencing our lives. They are “absent but not gone,” a finding that we may feel is equal parts romantic and unsettling—but it wouldn’t have surprised Plato.