Giving makes us feel good. But how does not giving make us feel?

A substantial body of research has repeatedly suggested that spending money on others makes us happier than spending money on ourselves. This is good news for charities, which rely on donations to pursue their philanthropic missions. But how do people feel when they’re asked to donate and choose not to? And how do we convince people to donate in the first place?

In a new study, researchers investigated these questions and found that it doesn’t feel very good to decline to give. This is something to keep in mind if you’re an individual confronted with a donation opportunity—or a charity considering how widely (and often) to send out your appeals. 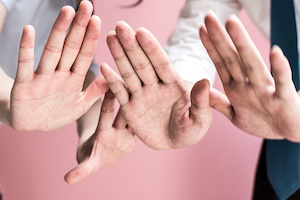 “A lot of past research that has assessed the emotional rewards of giving has looked at those who give,” says Lara Aknin, an associate professor of psychology at Simon Fraser University and the leader of the study. “But in the real world, when people are presented with donation opportunities, there are some who just walk on by. So we looked not just at people who participate, but those who choose not to.”

In the study, 287 undergraduate students started by reporting their initial emotional state. They were then separated into two groups and given the opportunity to roll a six-sided die to win money. In one group, each individual received either $3 or $6 based on the number rolled. In the second group, two participants were paired together and could earn either $6 or $12, which they would then split equally.

After receiving their winnings, the participants were presented with an opportunity to anonymously donate to Spread the Net, a UNICEF-affiliated organization that provides bed nets to stop the spread of malaria in Africa. At the end of the experiment, they filled out a second questionnaire that assessed their current emotions and well-being.

The results, published this April in The Journal of Positive Psychology, showed that participants won an average of $4.25 and over 90 percent of them donated to charity, with an average contribution of $2.80.

In their analysis, the researchers found that participants who donated a larger proportion of their winnings (more than 50 percent) reported increases in happiness, pride, and positive emotions (such as excitement, strength, and enthusiasm) and decreases in negative emotions (such as distress, guilt, and irritability). Meanwhile, the low and non-donors saw little change in their emotional state, except a dip in positive feelings.

Yet despite these benefits of giving, one traditional tactic for encouraging donations didn’t seem to work. Participants’ donation decisions did not differ whether they won money individually or in the presence of another person—which, charities might assume, would conjure up the desire to donate more and make a good impression.

Why do those who decide not to give “suffer” in the first place? According to Aknin, it might boil down to an internal dissonance caused by ignoring our intrinsic sense of what is right.

“At some level, people know it’s good to do nice things for others, but they are not always doing it,” she says. “Whether it’s not living up to their personal standards, or just being ashamed that they didn’t give—these things might influence why people are experiencing negative consequences when they choose not to donate.”

In future studies, Aknin and her team hope to test the effects of personal money versus winnings, non-anonymous donations, repeat donations, and other factors that may influence our generosity and how it makes us feel. This could affect how charities think about fundraising, as well as the general well-being of their donor pool.

“Donation requests have an important consequence for people in need,” says Aknin. “The goal is to understand which features tip the scale in favor of the good so that we can figure out what leads more people to give and feel better about it.”