Psychologists have recently linked intellectual humility to a host of benefits: showing more persistence in the face of failure, holding less polarized beliefs and attitudes, and being received as warm and friendly by others. But what does it take to be intellectually humble—and how do you know if you already are? 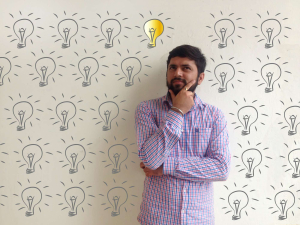 The old joke about humility—that “it’s my greatest quality”—speaks to the difficulty in knowing how humble you actually are. It’s a paradox: If you’re walking around thinking you’re humbler than most people, then chances are good that you’re not.

For precisely that reason, a trait like humility presents special problems in measurement for scientists and lay people alike. Even so, there are ways for you to try to understand how intellectually humble you are—and to cultivate this quality within yourself.

The trouble with measuring humility

Most recently, a study published in the Journal of Personality Assessment reviewed the existing theories and measures of intellectual humility and proposed that there are two key dimensions: the self-directed vs. other-directed dimension and the internal vs. expressed dimension.

Which means if you’re reading this article because you want to know if you are intellectually humble, you’re in a bit of a pickle. You could start by asking yourself one of the questions that researchers ask study participants: Do you “question your own opinions, positions, and viewpoints because they could be wrong?” But now you (and scientists who ask these questions) are faced with a problem: Are individuals really well-equipped to accurately assess their own intellectual humility?

The trouble is that humans are prone to many biases and blind spots that can make accurate self-assessment difficult. In fact, because we show a preference for positive emotions over negative ones, we are motivated to “self-enhance,” or view ourselves more favorably than we really are.

Just be sure to remain mindful of the human tendency to self-enhance!

Discovering your own intellectual humility

Here are four different types of intellectual humility to look for in yourself—and some tips on how you might cultivate each one.

1. Internal and self-directed intellectual humility. This one requires you to inquire, honestly, about yourself. For example, when you have an opinion, are you open to changing it? Do you ever think about whether the reasons you have for a certain belief might be wrong? Do you calibrate the strength of your beliefs to the strength of your evidence? As answers begin to come to mind, make sure to take a moment and examine them for any biased thinking. Did they stand up to the scrutiny or was there some self-enhancement baked into your intuitions?

For readers who want to improve this kind of intellectual humility, making a habit of awareness is a great first step. Try checking in on your beliefs and opinions periodically, especially those that are important to you. Pay attention to the strength of the evidence supporting those beliefs, whether you ever question them, and how open you are to changing your mind. Just the very act of checking in constitutes intellectual humility, but doing it will also help you recognize where you might be falling short.

2. Internal and other-directed intellectual humility. This type of internal intellectual humility concerns thoughts and awareness regarding others. Once again, you’ll have to do some self-reflection, and one common place to start is asking yourself whether you recognize the intellectual merit in opinions and beliefs that are different from your own.

Before answering, it’s important to acknowledge the breadth of this question. It might be easy to recognize the merit in a friend’s opinion about a new movie, but very difficult to see merit in why someone voted for a political candidate you dislike. In fact, research has shown that when we perceive a discussion as a disagreement or when we perceive our discussion partner as immoral, we are less likely to be intellectually humble.

Often, we jump to conclusions about other people and their beliefs, even with incomplete information. We tend to judge books by their proverbial covers. This is exactly where an intellectually humble individual will withhold strong judgments, precisely because evidence is limited as long as you haven’t “read” the book. For instance, hearing that someone voted for your least favorite political candidate might elicit a negative knee-jerk reaction. However, you may not know how they arrived at their decision or the quality of evidence that led them there. If you find yourself in this situation, be curious! Understand the entirety of the picture—both your side and theirs—before making a judgment.

At the end of the day, it’s possible that you still disagree with their voting choice—and that’s OK. This type of intellectually humility is not about changing your opinion to accommodate others; it’s about fairly evaluating others and their beliefs.

Now, you can of course begin by asking yourself how much you do these things, but for the expressed form of intellectual humility, you can also look to those around you to help determine how humble you are. Doing both, asking yourself and others, will likely give you a more accurate picture of how intellectually humble your actions really are.

Most people have at one point or another realized that they were wrong about something—but then couldn’t bring themselves to admit it. Boiled down, this is a disconnect between internal and external intellectual humility. Even armed with the knowledge that you were wrong, you put up a fight to “save face.” Although that response might feel instinctual, the research suggests that it’s those who are perceived as intellectually humble and admit being wrong who are viewed more favorably by their peers. So, when you are wrong, just admit it!

Even the best of us can get sucked into the latter, but it’s a textbook example of intellectual arrogance. This type of intellectual humility can also arise in the context of feedback. It’s easy to discount critical feedback on the grounds that you “know better.” However, in doing so not only are you suggesting that your ideas are superior to your critic’s, but you may also be missing out on valuable insights that lie in your blind spots.

This is the perfect type of intellectual humility to check in with those closest to you about. Ask them if they feel heard in conflict, if you convey yourself in a way that suggests you think your opinions are superior to theirs, and how you receive feedback. If the answer surprises you, that’s just one more reason to work on being intellectually humble.

Knowing how intellectually humble you are isn’t an easy task, and being intellectually humble itself isn’t any easier! At the heart of these difficulties lie human characteristics and biases that we all share: We self-enhance, we’re prone to defensiveness in disagreements, we judge books by their covers, and the list goes on. Yet, the science tells us that fostering these four aspects of intellectual humility can help you learn new things, improve your relationships, and create a less divided world.