Is happiness in our genes?

Research from positive psychology has suggested that as much of half of it is. However, research hasn’t zeroed in on what this really means. Is there a single happy gene? Do happy people share the same genetic makeup?

While scientists are still years away from answering these questions, researchers from the University of Edinburgh in Scotland recently started to tackle them, finding that the components of happiness are controlled by different genetic influences. 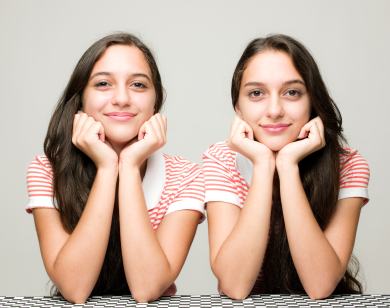 The researchers studied more than 830 pairs of adult twins, identical and fraternal, which enabled them to explore how a person’s genetic makeup and environment affect his or her well-being.

The study participants completed a scale that measures a person’s happiness based on six factors: their self-acceptance, feelings of autonomy, personal growth, positive relationships, pursuit of goals, and sense of control over their lives. The questions on the scale asked participants to rate how strongly they agree or disagree with different statements, such as “I have confidence in my opinions, even when they are contrary to the general consensus,” and “I like most aspects of my personality.”

The results, to be published in the Journal of Personality, suggest that genetics plays a large role in all six components of happiness, but these different components do not seem to be influenced by the same genetic factors.

Researchers have long understood that our genes play a significant role in our happiness, but this study suggests that happiness can be understood as the sum of different genetic contributions.

In other words, there is not just one genetic pathway that determines happiness, and there is not just one personal characteristic that defines happiness. Instead, true psychological well-being is composed of several parts, which are influenced by different aspects of our biology. (This study didn’t pinpoint which biological mechanisms are most important to different aspects of happiness.)

The findings also reinforce the fundamentals to living a good life, says Timothy Bates, one of the study’s authors and a professor of psychology at the University of Edinburgh.

“Our paper says that a big part of thriving involves accepting yourself as you are, imperfect but responsible and capable to do better, working towards goals, getting along with others,” he says. “It’s not such a sexy message. In fact, it’s quite an old one: Aristotle would not have been surprised, neither would Ben Franklin.”

In the end, everything lies within self. As long as one accepts who they are and how they are, most of the problem is solved.

but instead of doing that, people try to live their lives for someone/something else and this causes a whole lot of problems.