“Peer pressure” seems synonymous with drinking, smoking, drug use, and bullying among teenagers. But according to Tina Rosenberg, author of the new book Join the Club, peer pressure can also be harnessed for good, and not only among teens. Positive forms of peer pressure have been shown to improve math scores among African-American college students, help overweight adults shed unwanted pounds, and even overthrow the dictatorship of Slobodan Milosevic. 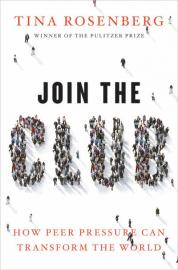 For example, she writes about a program in Florida called SWAT—Students Working Against Tobacco—that empowers students to create their own anti-tobacco commercials critical of the tobacco industry. (It’s the program behind the “truth” campaign.) Starting in the late 1990s, SWAT teens took their message to other teens around the state via a “truth train” that traveled from city to city, giving on-board workshops and providing free concerts featuring famous pop groups, like ‘N Sync.

Why is this program more successful that other anti-smoking campaigns? As SWAT organizer Peter Mitchell explains to her, “What do teenagers want? They are shopping for a way to rebel against their parents. Well, these people [the tobacco industry] are even less cool than your parents.”

“The typical attempt to solve a social ill focuses on giving people information, or it tries to motivate people though fear,” she writes. But these tactics will fail unless they can encourage people to “obtain what they most care about: The respect of their peers.” 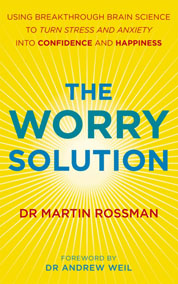 Humans worry way more than they need to, according to Martin Rossman, a physician and the author of the recent book The Worry Solution.

Our worry, when excessive, can lead to physical stress and emotional anxiety, which clouds our judgment and can even lead to physical illnesses. But, of course, some worries are justified because they focus on real problems and dangers. Rossman attempts to show readers how to distinguish corrosive from helpful worrying, and how to handle each more effectively.

His solution, outlined in the book, is a five-step program using relaxation techniques and guided imagery. The program, he claims, can help readers relax physically and mentally, get better perspective on worries that are unfounded or not useful, and find solutions to worries based on real problems.

Though Rossman does not claim his program has been scientifically tested, he does base it on neuroscience research on the brain’s “plasticity,” which suggests the shape of the brain is malleable and can be changed by consciously reprogramming our thought patterns.

Readers may find his guided imagery exercises particularly helpful in reducing their own stress levels and accessing their “inner wisdom” to address nagging concerns.