Most people recognize the importance of daily physical exercise to their health, even if they can’t bring themselves to do it.

In Spark, Harvard psychiatrist John Ratey gives them yet another reason to get active: Exercise, he argues, has a “profound impact on cognitive abilities” and it “is simply one of the best treatments we have for most psychiatric problems.” 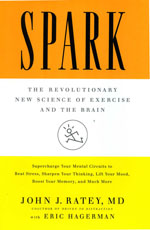 Ratey, who wrote the book with journalist Eric Hagerman, cites numerous studies to support his case for the relationship between a healthy mind and a healthy body.

Exercise, he says, does what most psychiatric drugs do: It boosts levels of serotonin and norepinephrine. It also causes the release of a newly discovered substance in the brain called BDNGF, which Ratey dubs as a “miracle grow” for the brain. Finally, researchers have recently discovered that several areas of the brain devoted to motor function also have critical roles in cognition; physical exercise strengthens the pathways between these areas and might thereby improve cognitive function.

The studies Ratey covers are mostly small in scale or were conducted with animals, leading one to wonder whether he is always justified in making generalizations from such data. However, the idea that exercise helps optimize brain function is biologically plausible. Daily physical activity has been part of human life for millennia. Just as it helps foster health in our other organs, as Ratey suggests, physical exertion may very well help the brain, too.