This piece by Greater Good editor-in-chief Jason Marsh was published over the weekend on CNN.com.

Is Whitney Houston a hero?

New Jersey citizens—and Whitney fans and haters alike—have been debating this question since Gov. Chris Christie announced he would fly the state’s flags at half-staff for the singer Saturday as mourners attend her funeral in Newark, New Jersey.

Christie’s decision has been widely criticized—77 percent of USA Today readers called it “inappropriate” in one informal and unscientific poll. But he has strongly defended the order, hailing Houston as “a daughter of New Jersey” who should be honored for her “cultural contributions.” 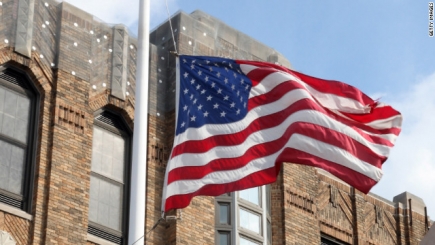 A flag flies at half-staff outside the funeral home where a private viewing for Whitney Houston was held Friday in Newark.

For decisions like this, there is a federal “Flag Code,” which stipulates only that the flag be flown at half-staff to honor deaths of certain public officials, adding that governors can honor members of the government or military from their state.

But regardless of what the official code says, the standards around flag-flying have been fuzzy for years. Most of Christie’s prior orders to lower the flag have honored service members killed in combat, yet he issued the same order after the death of Clarence Clemons, the saxophonist for Bruce Springsteen’s E Street Band. Frank Sinatra received the honor years earlier… Read the rest on CNN.com.