Are you a Bridger?

The two of us would like to think we are. After all, over the past two years, we’ve helped to lead the Greater Good Science Center’s Bridging Differences initiative, which has been exploring the keys to positive dialogue and understanding across lines of race, religion, political ideology, and more. 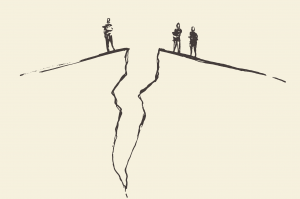 Yet this work has raised some challenging questions for us. Does “bridging differences” mean that we paper over social injustice in pursuit of social harmony? Does it require us to sacrifice our ideals in order to always find common ground with others? Or to accommodate views or behavior that we find abhorrent?

These questions have taken on even greater urgency over the past several months, as the COVID-19 pandemic has forced a reckoning with systemic racism in this country and all of the inequities that follow from it. Calls to “bridge differences” in this moment can seem to gloss over centuries of discrimination and oppression, pushing for reconciliation before fully acknowledging and addressing the experiences of African Americans.

That’s one big reason—among many—why we think it’s important to clarify what bridging differences actually entails. In reviewing years of research on the topic, and through conversations with some of the leading voices in the field, we have surfaced eight key principles to help explain what we think bridging differences is—and is not—all about.

1. Bridging starts with a recognition of common humanity

First off, it’s important to stress that bridge building does not mean that you always agree with another person or even find common ground with them. In fact, you might disagree with them vehemently. But the key is that you don’t dehumanize them in the process—you never reduce them to a caricature or see them as somehow less worthy of health and happiness than you are.

Indeed, bridging starts from recognizing that another person or group has their own human needs, tastes, values, goals, and worldview, just as you do. Without that basic recognition of your shared humanity, constructive dialogue—to say nothing of problem solving—is unlikely to happen.

“A lot of bridging happens because someone feels like they’ve been heard,” says john a. powell, a civil rights expert and the director of UC Berkeley’s Othering and Belonging Institute. “It means a lot to be seen, heard, and understood . . . it’s very close to being loved.”

By contrast, research by Emile Bruneau and Nour Kteily suggests that dehumanizing a member of another group is strongly associated with feelings of hostility and aggression toward that group—these are the types of feelings that “feed cycles of intergroup violence,” write Bruneau and Kteily. Another study found that people who dehumanize their political opponents see greater moral differences between their groups and even prefer greater social distance from them—in effect, the opposite of bridging.

2. Bridging is not about persuasion; it’s about understanding

The true goal of bridging differences is not to convince the other person of your viewpoint—or even necessarily to build consensus.

“Bridging work is not a sneaky way to convert people to your ideological position,” says Reverend Jennifer Bailey, founder of the Faith Matters Network and co-founder of The People’s Supper, which brings people together over dinner to broach challenging topics.

Instead, the heart of bridging work lies in trying to understand someone else’s perspective. While you might not share their views, you don’t dismiss them; you dig deeper to try to appreciate where those views came from. This often requires asking questions and being willing to suspend judgment.

The benefits of this type of perspective taking are profound: One study, led by UCLA researcher Margaret Shih, suggests that when a member of one ethnic group tries to see the world through the eyes of someone of a different ethnicity, they report liking members of that group more and are more likely to help them out. Other research suggests that perspective taking reduces knee-jerk racial biases.

It’s worth noting, though, that research by Bruneau has found that when there are power imbalances between two groups, it’s more valuable for someone from the lower-power group to give their perspective rather than to try to take the other person’s.

The term “bridging” can often seem synonymous with compromise. To bridge your differences with someone else, the thinking goes, you need to give up your own closely held beliefs.

“Today in the national media, the notion of structural, systemic change is offered up in contrast to being ‘bipartisan,’” said Steven Olikara, the founder and president of the Millennial Action Project (MAP), at a recent GGSC event on Bridging Differences. In other words, if you want to build political bridges, you can’t expect to stray too far from the status quo.

But instead, in MAP’s solutions-oriented work with young politicians from the political left and right, Olikara has found that the bridgers are the ones who get stuff done—even effecting changes that some people thought were too ambitious, such as ending partisan gerrymandering in Ohio.

“So that’s an example where we had a radical idea about structural, systemic change,” says Olikara, “but we used [Rev. Dr. Martin Luther] King’s methodology of building bridges with not just people in the moderate center but from across the political spectrum, and that’s how we had enough support for it to ultimately pass.”

When we think about bridging differences, we usually think about grand gestures or breakthrough conversations. But the truth is that much of the work happens before those events ever take place. To make them possible, we often need to cultivate the right mindsets and psychological approach—and that’s something we can (or must) do outside of our interactions with other people.

That’s why a substantial portion of the GGSC’s Bridging Differences Playbook is devoted to intrapersonal skills—skills you can practice on your own, to build your capacity for more positive interactions with other people and across groups.

For instance, research has indicated that practicing mindfulness can actually reduce biased attitudes and behavior against members of a different group.

To bridge differences, you usually need to accept that you don’t have all the answers or own a monopoly on the truth—an outlook that researchers refer to as “intellectual humility.”

This is especially important because bridging often involves contact between people from different cultures or communities. You probably won’t get very far in your bridge-building efforts if you presume that your own tradition or story is definitely the right one. This is true whether you’re talking about major historical events or your own family’s history: You need to recognize that your narrative isn’t the only one that matters.

In fact, research has found that when people with strong religious beliefs were confronted by doctrines from another religion, those who were lower in intellectual humility argued more vehemently in favor of their own religious beliefs, and more vehemently against the other religion’s beliefs, than did people higher in intellectual humility. The more humble folks showed greater openness to other people’s views and experiences.

6. Bridging is sometimes about small shifts over time

While bridging differences might involve trying to overcome a history of conflicts—interpersonal or political—or forging an alliance between once-opposing groups to work toward a common goal, it sometimes centers on more modest shifts. That can mean just setting an intention or an openness to change down the line.

“Bridging is sometimes just putting a flag in your land that says, ‘I’m working on it,’” says Rodolfo Mendoza-Denton, a professor of psychology at UC Berkeley and a faculty advisor to the Greater Good Science Center. “Sometimes that’s the job of the person who bridges, to make small incremental changes.”

In that vein, powell talks about “short” and “long” bridges; the psychological and emotional distance someone needs to travel determines the length of the bridge.

With a short bridge, for instance, two people might both believe in climate change but have different approaches on how to address it.

Then there are cases where the distance between two people might feel greater and more challenging to overcome. One person might be a climate change activist while the other might deny climate change altogether. Traversing these longer bridges requires an investment of more time and trust. There’s more at stake, too.

While crossing a long bridge is an ambitious and worthwhile goal, we shouldn’t underestimate the significance, and even the challenges, of crossing some smaller bridges, as well. Indeed, crossing those short bridges can be good practice for ultimately crossing the longer ones.

7. Bridging is not without risk

Bridging often involves taking risks and exposing vulnerability. You may risk having your overtures rejected, and you may often need to express feelings of hurt, anger, or disappointment.

“The first person takes the greatest risk, but once that happens, others are likely to follow suit,” says powell.

Perhaps most of all, when you truly try to hear someone else’s views, you risk being changed or influenced by what you hear.

“That willingness to be transformed is also a necessary part to do authentic bridging work,” says Bailey. “I don’t think you can walk away from a bridging scenario, particularly when you’re bridging differences, and remain exactly the same.”

8. Not everyone should bridge

Partly because of those risks, it’s important to recognize that not everyone can or should be a Bridge Builder, or feel compelled to build bridges in every situation. The work of bridging should not be done by demand.

It’s ethically dubious—and, research suggests, often counterproductive—to ask people to bridge differences when they’re being discriminated against or otherwise denied social power. Before they’re ready to bridge, some must heal from personal trauma. And it can be psychologically harmful, not to mention physically dangerous, to try to forge a connection with someone who fundamentally denies your right to exist or threatens you with violence.

As we’ve suggested above, bridge building shouldn’t be used as a tool of persuasion or coercion, especially not to consolidate power in order to attack or oppress others. It’s about expanding one’s sense of commonality with others, not about constricting them to adopt your worldview.

There’s one final point we should stress about bridge building: As well-intentioned as we may be, trying to bridge differences often won’t lead to the outcomes we hope for, at least not at first. It is a deeply human process, and we’ll often make mistakes along the way. It’s critical to remember to be compassionate toward ourselves and others when we encounter setbacks.