Have you heard this tale? In ancient times, an escaped slave hid in a cave only to encounter a wounded lion. Although afraid, the man helps the lion, removing a thorn from its paw. The lion is forever grateful, shares his food with the man, and, eventually, saves his life. 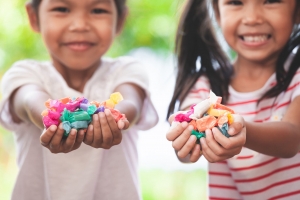 If this millennia-old fable sounds familiar, you may have encountered it as a child. Variations of “Androcles and the Lion” appear in Aesop’s Fables and Roman folklore, and the story persists in children’s books today.

Stories like these capitalize on a lesson that most people consider to be deeply natural and intuitive: “You scratch my back, I’ll scratch yours.” Given the relevance of this proverb in daily life, like many psychologists before us, we assumed that this principle would be at play in the behavior even of young children.

However, recent experiments by our team suggest that reciprocity of this kind is neither natural nor intuitive: Young children showed almost no awareness that they should repay favors to those who helped them in the past.

Helping those who help you

The principle of direct reciprocity—paying back those who have helped you in the past—is so central to everyday life that it’s often imbued with moral status. In many societies, including the U.S., failure to return a favor can be considered a great offense.

Beyond the personal level, researchers have argued that direct reciprocity can explain both the success of communities and the evolution of cooperation more generally. We reasoned that if reciprocity is indeed something that evolved as a foundation of the way human beings interact with others, it should come naturally to young children.

To test this hypothesis, we designed a simple computer game for four to eight year olds. Children interacted with four avatars that we told them were other children playing the game. In one version of the task, all of the “other children” received a sticker, leaving the child without any. But then one of the players gave their sticker to the child.

In the next phase of the game, the child received a second sticker which they could give to one of the other players. Surely, the most obvious choice would be to return the favor and give that sticker to their prior benefactor?

In fact, the answer was an unequivocal no. Even when forced to give their new sticker away, and even when interacting with people who were members of their same social group, children at all ages gave randomly to one of the other players. Their behavior showed no evidence of direct reciprocity.

Was there something wrong with our task? Or was it too difficult for young children to keep track of who had done what? It didn’t seem like it—when we asked them, nearly all the kids recalled who had given them a sticker.

We found this same effect several times in other groups of children, again finding no evidence that they respect the principle of “You scratch my back, and I’ll scratch yours.”

Does this mean children never show direct reciprocity? Not exactly. In fact, they did, just in the form of grudges rather than gratitude.

Paying back with a punishment

We tested the negative form of direct reciprocity with a different group of children, who played a “stealing” version of the task.

Children started with a sticker which was then stolen by one of the four computer players. Later the other players had stickers, and the child had the opportunity to take from one of them. Now children retaliated, often with relish, snatching a sticker from the thief in order to even the score.

Why were children of the same age eager to retaliate but unconcerned with returning a favor? Here too, memory errors or biases could not account for the phenomenon: Children were just as good at remembering the nice person as the mean person, but they only reciprocated in the case of negative behavior.

An expectation that must be learned

Young children may not respond to obligation, but researchers know they try to abide by social expectations. We wondered if children were simply unaware of the norm of returning favors. Maybe it just doesn’t occur to them to reciprocate the benefits they received.

So, we asked them. We used the same game as before and children still received a sticker, but this time, we just asked “Whom should you give to?” In this case, kids in the oldest age group we looked at, seven and eight year olds, did systematically pick the person who had given a sticker to them. Younger children chose the potential beneficiary at random; it appeared that they simply didn’t know the rule.

Our results suggested that young children must learn the principle of direct reciprocity in order to apply it.

Both groups of children then played the same game as before. It turned out children in the first group, who heard the reciprocity story, were much more likely to “pay back” the person who gave to them compared to the children who heard the second story about kind deeds. In other words, a simple story about gratitude was sufficient for children to start following the social norm of paying back favors.

So the upshot isn’t so grim after all: Grudges may come more naturally than gratitude, but gratitude is readily learned. Perhaps, then, the reason why there are so many fables like “Androcles and the Lion” about reciprocity isn’t because the behavior comes so naturally. Instead, we need the fables precisely because it doesn’t.