Are humans inherently and universally selfish? When and why do we cooperate?

Two recent books, both by Harvard professors, seek answers to these timeless and essential questions, though they approach them from different perspectives. In SuperCooperators, Martin Nowak, a professor of biology and mathematics, and acclaimed science writer Roger Highfield argue that cooperation is an indispensable part of our evolutionary legacy, drawing on mathematical models to make their case.

In The Penguin and the Leviathan, on the other hand, law professor Yochai Benkler uses examples from the business world and the social sciences to argue that we ultimately profit more through cooperation than we do by pursuing our own self-interest.

Taken together, the books provide strong and complementary accounts of the far-reaching science of cooperation. 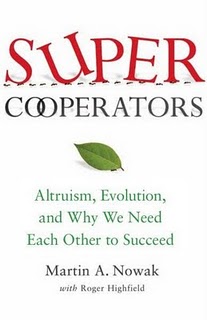 SuperCooperators is an overview of Nowak’s ambitious, groundbreaking research challenging a traditional take on the story of evolution—namely, that it’s one of relentless competition in a dog-eat-dog world. Rather, he proposes that cooperation is the third principle of evolution, after mutation and selection. Sure, mutations generate genetic diversity and selection picks the individuals best adapted to their environment. Yet it is only cooperation, according to Nowak, that can explain the creative, constructive side of evolution—the one that led from cells to multicellular creatures to humans to villages to cities.

Life, his research suggests, is characterized by an extraordinary level of cooperation between molecules. Indeed, Nowak devotes one chapter to cancer, which is nothing less than a deadly breakdown of cooperation on the cellular level.

So how has cooperation been so important to our survival? The first half of SuperCooperators answers this question as Nowak and Highfield outline five ways that cooperators maintain an evolutionary edge: through direct reciprocity (“I scratch your back, you scratch mine”), indirect reciprocity/reputation (“I scratch your back, somebody else will scratch mine”), spatial selection (clusters of cooperators can prevail!), group selection (groups comprised of cooperators can prevail!), and “kin selection” (close genetic relatives help each other).

SuperCooperators not only chronicles what Nowak has discovered during his exciting academic journey but the journey itself—it is his scientific autobiography, as well as a biography of the field and its most pre-eminent characters. For the uninitiated in math and the natural sciences, the book might feel a bit technical in a few places. Yet it is a readable and stimulating book overall, particularly rewarding for readers interested in the evolutionary roots of cooperation or an insider’s view of the world of science.

In The Penguin and the Leviathan, Benkler also reviews research at the intersection of evolution and cooperation, citing Nowak’s work at times. Yet Benkler draws more heavily on research from the social and behavioral sciences—namely history, technology, law, and business. 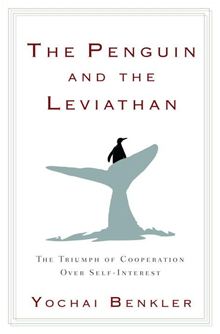 The title of the book comes from Tux the Penguin, the logo of the free, open-source operating system software Linux. Tux symbolizes the inherently cooperative, collaborative, and generous aspects of the human spirit, and according to Benkler “is beginning to nibble away at the grim view of humanity that breathed life into Thomas Hobbes’s Leviathan.” The book aims to debunk “the myth of universal selfishness” and drive home the point that cooperation trumps self-interest—maybe not all the time and not for everyone, but far more consistently than we have long thought.

Benkler recounts that in any given experiment where participants have to make a choice between behaving selfishly and behaving altruistically, only about 30 percent of people behave selfishly, and in virtually no human society studied to date have the majority of people consistently behaved selfishly. Furthermore, as he points out, the cues in a situation can be more powerful than personality traits in predicting cooperation: In one study where participants played a game in which they could cooperate or compete, only 33 percent of them cooperated when the game was called the “Wall Street Game,” whereas 70 percent did so when it was called the “Community Game.”

In an easy-flowing, conversational style, Benkler elaborates on the key ingredients that make successful cooperation possible, such as communication, empathy, social norms, fairness, and trust. We learn, for example, that when study participants play a game in which they can cooperate or compete, levels of cooperation rise by a dramatic 45 percent when they are allowed to communicate face-to-face. The research on social norms is especially compelling: When taxpayers are told that their fellow citizens pay their fair share of taxes, or that the majority of taxpayers regard overclaiming tax deductions as wrong, they declare higher income on their taxes.

But Benkler doesn’t just limit the book to reviewing scientific studies. He also provides plenty of real-world examples that bring the science to life, making the book read like a handy guide to designing cooperative human systems. From kiva.org to Toyota to Wikipedia to CouchSurfing.org and Zipcar, he shows how organizations relying on cooperation—instead of incentives or hierarchical control—can be extraordinarily effective.

Neither Nowak nor Benkler are naïve about the prospects for cooperation. They remind us that there will always be selfish people, and that the cycles of cooperation will perpetually wax and wane. Besides, being “good” and “cooperative” are not necessarily synonymous—unspeakably cruel, inhumane acts have been committed by people who were deeply “cooperative” (think of Nazi Germany, the USSR, the Rwandan genocide).

Yet both authors are optimistic about the power and promise of cooperation, and agree that the world needs cooperation now more than ever: The gravest problems of our era—such as climate change, natural resource depletion, and hunger—can only be solved when people set self-interest aside and work together. Both SuperCooperators and The Penguin and the Leviathan leave us with an appreciation for the centrality of cooperation to life—and should inspire us to try to harness the science of cooperation for the greater good.

Very timely releases, but I won’t be holding my breath waiting for the world to change. The global oligarchy that has the rest of humanity and the ecosystem by the throat is not going to let go voluntarily. We live in an age of cooperation, alright: cooperation among apex predators extracting as much wealth as possible from the global economy, irrespective of long-term social and environmental costs.

Don’t believe me? The governance and economics of the United States provide a perfect illustration. Wall Street bankers walked away from the wreckage of the global economy, their personal portfolios fattened by fabulous bonuses for a job well done, and need have no fear of ever being prosecuted for the most severe and systematic financial fraud ever perpetrated. The government that they captured set in place a legislative framework and lax regulatory environment that allowed them to turn the world into a private casino. And that government continues to give them special tax breaks, makes sure that even the states can’t prosecute them for mortgage fraud, and continues to prop up an ever-more concentrated financial sector with supportive monetary policies.

Sorry about the rant, but this is the reality of human cooperation in our time. The people who need to read these books - to have the message seared into their prefrontal cortex - are spitting out their champagne in laughter.

Higher Plane is critical of contemporary American society, but his critique is not directly relevant to the issue.  The underlying issue is whether life on our planet is the human species’  DESTINY, or merely our species’  TESTING-GROUND preparatory to the Afterlife.  The latter view may strike some readers as absurd, but those who think it is absurd have not read the traditional religious literature on the topic; and do not realize the extent to which this literature dominates the thinking of a large segment of the morally-concerned population.
The first item of awareness, for those concerned about the condition of our planet as a human habitat, is to discover the continuing predominance of regarding the Afterlife central, and life on Earth peripheral, in global religious doctrine.

Observe/Reflect - If your point is that religious fundamentalists are ignoring environmental degradation here on earth because they are far more interested in passing through the pearly gates, then your critique and mine are more closely related than you might think. (I say “if” because it is not entirely clear whether you approve or disapprove of this tendency, and I hasten to add that one does not have to be religious to be moral.)

As Kevin Phillips explained at great length in “American Theocracy,” the child-like belief of evangelical Christians that God will make everything alright in some final reckoning leads them to look askance at the environmental movement. This plays right into the hands of the greedy corporations for whom heaven is a bulging bottom line. The presidential candidacy of Michele Bachmann embodies this alliance with breathtaking clarity and ugliness.

Does this unholy alliance of interests represent cooperation? Absolutely, unless we want to split hairs about the extent to which all parties are consciously aware of their choices. The religious fundamentalists may not be thinking about the political or economic consequences of their beliefs (though Republican primary voters might well be). When politics is the primary avenue through which human beings cooperate in the attainment of social goals, and when so much is at stake, the political arena is a superb testing ground for any hypothesis about human selfishness or altruism.

Higher Plane,
There is indeed a synergy between the forces of the profit-focused corporate executives and of the Afterlife-focused religious traditionalists.  One helps the other achieve their short-term goals, at the expense of the global viability of our species.  Between the lines of both our messages is the need for an action program beyond feeling good about human cooperativeness, an action program to break up the synergy described above. Perhaps other readers here can reflect on the steps involved in such an action program—a program that should be the focus of a constructive response to the problem.

This was a very timely topic. This week I unwittingly turned to a conservative talk radio station, they were asking people to say how they used denial to deal with unpaid bills. The bit was hillarious! Of course I was disgusted when I realized they were a right-wing station, but I then thought what a shame they are normally hostile. They could use their obvious humor to get both “sides” talking. This is indeed a complex topic.

I think it’s a mistake to start out with a comparison to the natural world. For one, “survival of the fittest” is being seriously modified, and even if it’s valid, the comparison to humans is a bit of useless anthropomorphizing.

Here’s why - wildlife are not just cute things running around. They are part of the biosphere - a layer of Earth just like the atmosphere or lithosphere.

“Cooperation” of molecules is more like chemical reaction. It’s also about ecological niche - what fits.

Human pack mentality (the fact that we naturally want to belong to a group and are social animals) could be compared to wolves or dogs, but not really to molecules or the biosphere. Those things work together mostly because of chance and chemical reactions.

interesting review
it worth reading

quite an interesting review, well worth the read.

Good stuff. I love it! Thanks for the information.