We humans like to think of ourselves as the most supremely evolved species on the planet, elevated and distinct from all others. In his newest book, leading primatologist Frans de Waal debunks this idea. Drawing on nearly 20 years of research on chimpanzees and bonobos, our closest primate relatives, he shows how many behaviors we think of as uniquely human are, in fact, paralleled in the ape world. But while other primatologists may study apes for clues into the biological roots of human aggression and hostility, de Waal insists that many positive human attributes—such as empathy, kindness, and altruism—are part of our animal heritage as well. 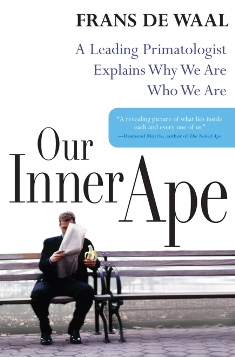 In making this point, de Waal devotes considerable space to the bonobo, comparing this peace-loving ape to the more familiar chimpanzee. While chimpanzee groups have a male hierarchy and routine power struggles, bonobos are matriarchal and display little aggression toward each other. And while chimps can be cruel, sometimes brutal, toward others outside their circle, bonobos often show kindness toward unfamiliar apes, even sharing food with them. By comparing these two apes, de Waal outlines the roots of our own sexuality, aggression, power struggles, and aptitude for reconciliation, concluding that humans have as much biological potential for peaceful coexistence as for waging war on each other.

De Waal focuses much of his analysis on trying to explain how and why human society looks the way it does. He claims that our social structures are “closely intertwined” with our sexual relations, just as they are in apes. For instance, he suggests that the human male’s reluctance to show vulnerability has its biological roots in the chimpanzee’s need to hide weaknesses from sexual competitors, who would otherwise take advantage. The nuclear family model arose from this problem of sexual competition, according to de Waal, as it ensured that every male, if willing to cooperate and respect the boundaries of other males’ families, would have a chance at reproduction.

De Waal makes this and other theories come alive through entertaining anecdotes of apes he’s studied in the wild and in captivity. These stories—of chimps giving hugs of gratitude to a researcher, of a gorilla trying to comfort an autistic woman in distress—make the book highly readable. They also reinforce one of de Waal’s main theses, illustrating that empathy and gratitude are not simply developed through social or religious training, but are ingrained in our biological history.

Our Inner Ape should prompt readers to reconsider their presumptions about human nature, and attune them to the “inner ape” beneath the surface of many human interactions. Which of our inner apes—the peaceful bonobo or the more aggressive chimpanzee—will leave a more lasting legacy on human evolution? De Waal makes no predictions, but insists we have the potential to follow either path. Only time, millions of years of it, will tell.