A lot of effort has been spent trying to get people to engage in healthier and more prosocial activities. We want people to take the stairs rather than the elevator, to eat fruits and vegetables rather than candy bars, and to help others rather than thinking only about themselves.

Often, getting people to change their behavior is treated primarily as a marketing problem. If only people really understood how desirable and important it is for them to do the right thing, they would do it more often. In many cases, though, people are already aware of the right thing to do. People know that climbing the stairs helps them to get more exercise, but they simply don’t do it.

A fascinating paper by Guarav Suri and James Gross in the August 2015 issue of the Journal of Experimental Psychology suggests that perhaps changing people’s behavior in many cases is as simple as changing what they pay attention to.

First, they did a laboratory experiment to demonstrate that people often get stuck in routines. In a preliminary study, they showed people pairs of pictures, one of which was more pleasant than the other. They gave people a free choice of which picture to look at for 15 seconds. Unsurprisingly, people chose the more pleasant picture the vast majority of the time.

This finding suggests that people may get locked into a default way of doing something. Directing their attention to an alternative may lead them to switch their behavior. 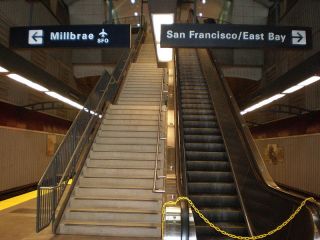 As a demonstration of this idea in a real-world setting, the experimenters observed people at a San Francisco subway station in which people had the option to walk the stairs or to take the escalator. In general, about 5 percent of people choose to walk up the stairs. Studies that directed people’s attention to the choice between the stairs and the escalator led around 10 percent of people to choose the stairs. This happened for signs that said “Stairs?,” “Stairs or Escalator?” or even “Escalator?”  This latter sign doesn’t even mention the stairs, but it gets people to pay attention to the fact that they have a choice.

Not every sign affects behavior, though. A sign that read “Have a nice day” did not influence the number of people who took the stairs.

These studies suggest that snapping people out of a default routine—by reminding them that they have a choice—can affect their behavior. Obviously, the effects are small. Most people in the field experiments are still not taking the stairs.

Nonetheless, increasing the number of people who do the right thing can feed on itself. If people visibly engage in behaviors like walking the stairs, then the effects of goal contagion may lead additional people to engage in positive behaviors.

These studies also suggest that subtle reminders of choice may be an easy way to affect behavior rather than having to engage in a more laborious (and expensive) campaign to educate people about what they should do.