Recently, my twenty-something daughters came home for Mother’s Day to cook up a homemade brunch for me. Afterwards, the conversation turned serious with my 25-year old. She planned to take part in a rugged, seven-day, 550-mile bike ride fundraiser that would happen just a few weeks after a wipeout on her bicycle and a surgery to rebuild her broken elbow with titanium.

“I’m really worried about you riding so soon after your accident,” I said. 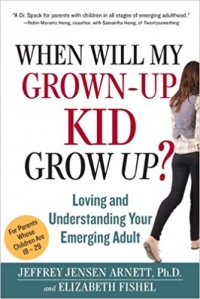 “It’s my passion,” she said. “I have to go. I built this team and helped raise the money.”

I questioned her judgment—she’s already had two serious accidents—and yet I didn’t want to undermine her responsibility for herself.

My dilemma was anything but unusual. According to Jeffrey Arnett and Elizabeth Fishel, authors of the new book, When Will My Grown-Up Kid Grow Up?, the main challenge of parenting 18- to 29-year-olds is figuring out “how to step back while staying connected.”

Arnett, professor at Clark University, has devoted his career to understanding a new period of the lifespan—situated between adolescence and adulthood—that he calls emerging adulthood. He teams up with Oakland-based journalist Elizabeth Fishel to write about the challenges of parenting this age group. The result is a lively and varied picture of life with emerging adults…complete with “do’s and don’ts.”

The term emerging adulthood has arisen in the last 50 years because of social and economic changes in modern societies: delayed marriage and parenting, the increased time it takes to become educated for the information-based economy, and the widespread acceptance of premarital sex. Compared to the boomer generation of their parents, explain Arnett and Fishel, fewer emerging adults are getting married and those who do marry later, have fewer children, and may be unemployed and living at home longer. Those who do work change jobs frequently before age 30.

The hallmarks of emerging adulthood are exploration in love and work, as young adults figure out what is important to them, what is possible, and what they want. Parents eager for their kids to get on their feet can mistake this trial-and-error phase for floundering or instability. Emerging adults are self-focused, but not selfish, often absorbed in learning new skills as they launch into the competitive world of work. The majority of them, when surveyed, feel that it’s a time of struggle—especially those who are younger, female, and less-well educated—but also a time of thriving. Even though their lives are full of uncertainty and change, they are confident that anything is possible.

What’s unique about parenting this age? Emerging adults are heading toward adulthood, where they will ultimately take responsibility for themselves, make independent decisions, and become financially stable. But most of today’s young adults aren’t there yet, and they aren’t getting there in any steady or predictable way. The challenge for parents is to figure out when to hold back and allow the child to take responsibility, and when to step in and assert parental authority. Arnett and Fishel cull the best guidance on topics like the shifting balance of power in the family, communication, college, love and relationships, finances, the Internet, religion, and mental illness.

The book is strongest when it delivers unambiguous advice about when to restrain one’s parental urges, when to nudge, teach, and consult, and when to directly intervene. For example, on your emerging adult’s love interest, they suggest that you don’t say anything you wouldn’t want their partner to know, since he or she might become a family member. At most, you might ask your child, “Is this a relationship in which you can be the best you can be?” Or when your emerging adult is having trouble getting a foothold in the work world, they suggest it’s okay to use your contacts to facilitate networking, but don’t storm the college career center yourself. Or when your emerging adult is ignoring the dangers of working in a foreign country, it’s okay to do the research yourself and share it with your child.

Arnett’s scholarly work acknowledges that emerging adulthood is not universal, even in America, but exists in cultures where young people have the freedom from early marriage, some economic opportunity, and the time to explore. However, here the authors are vague about who, exactly, the subjects of their studies are. A 2012 survey of 1000 emerging adults referred to in the book is nationally representative of gender, ethnicity, marital status, education, and geographical demographics—but not of sexual orientation, income, or urban vs. rural residence—which left me wondering how applicable the advice is in specific situations, such as when emerging adults struggle with poverty, immigration, disabilities, sexual orientation, or trauma.

As a developmental psychologist, I looked for and found little reference in the book to underlying brain development, something that can go a long way toward illuminating children’s growth. And the balance of becoming independent while staying connected to loved ones doesn’t appear out of nowhere in emerging adulthood: it’s a lifelong trajectory that looks different at different points. As parents, we always consider our children’s freedom vs. their need for our intervention, whether they’re toddlers or middle-aged, and how we manage this balance early in life affects our ability to engage with them when they are older.

The real news of Arnett and Fishel’s book is that our twenty-somethings do, in the normal course of development, still need our parenting. And parents, too, continue to develop. For example, just as our children are entering emerging adulthood, our lightened parenting responsibilities allow us new opportunities that may conflict with a boomerang child’s return to the house. Fishel has written about this issue before, and it’s nicely integrated throughout, here.

Title notwithstanding, When Will My Grown-Up Kid Grow Up? casts emerging adults in a positive light, and that’s refreshing. The authors dismantle negative stereotypes and caution parents not to let our fear cloud our view of their potential and capabilities. For example, they remind us that this is the Generous Generation, that “their zeal to serve others around the world is unprecedented.”

Fortunately, by the time I had the bike-a-thon discussion with my daughter, I had read enough of the book’s many examples to feel confident of how much of my concern I was entitled to express and when I should hold my tongue. She agreed to see her surgeon before the ride and to consider getting on the bus that swept behind the riders, and I, in turn, left the final decisions in her hands.

As it happens, she triumphantly completed all 550 miles of the ride…just Arnett and Fischel would have predicted. Most emerging adults, they write, do, in fact, land safely in adulthood.