In an ideal world, we would distribute our kindness and compassion to all beings, without preference. However, a great deal of research suggests that this is not the case—and a recent study from Stanford University suggests that, ironically, positive emotions may play a role in compelling us to help neighbors instead of strangers. 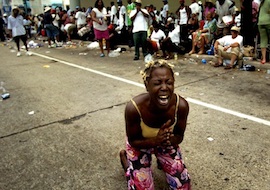 This is what social scientists call the “identifiable victim effect”—the tendency to preferentially give to those we can identify with as people, rather than to those we perceive as being anonymous or vague.

In the study, published in The Journal of Neuroscience, Alexander Genevsky and colleagues asked 11 participants to give donations to orphan children in Africa—and then scanned the brains of 22 more people as they made their charitable decisions.

The orphans were portrayed in different ways to different participants, in order to understand the relationship between identification and giving. Some saw the face of a child or they saw only a darkened silhouette, and some saw the name of the orphan while some did not. The researchers also allowed participants to give at three levels: low ($1-$4); medium ($5-$8); or high ($9-$12).

Consistent with a lot of previous research, participants donated more money to orphans who were presented through photographs rather than silhouettes, and they reported that the faces provoked stronger positive feelings. Including the child’s name had no effect on donations. But requesting lower amounts did: People were more likely to give smaller amounts and they reported feeling pretty good about that.

The upshot: Seeing faces makes us feel good, and that prompts us to help out the person the picture. The effects went beyond a one-time donation—people who saw silhouettes and reported more negative feeling were less likely to donate in the future. In other words, the bad feeling lasted and influenced behavior down the road.

But the researchers didn’t stop there. Their next step entailed scanning people’s brains as they looked at the orphans and allocated their money.

The results converged with the findings of the first part of the study: Again, photographs and lower requested amounts prompted more donations—and, again, people felt more positive about both.

But this time, researchers were able to peer in the brains of the participants. They found that brain regions associated with positive arousal—specifically, the nucleus accumbens—predicted increased donations, suggesting that within the same person, positive feeling increases our willingness to help others.

Scientifically, this study is the first to suggest that nucleus accumbens activity and associated “positive affect” can partially mediate the influence of identifiable information on charitable giving. This makes some sense, of course—why would we give if we feel bad?

But as the researchers point out in the paper, that’s not at all certain. Some try to make us feel bad about a situation in order to provoke us to help—and, indeed, there is some research to suggest that witnessing suffering in others can prompt a strong helping response. Other organizations throw a lot of words and statistics at the public, hoping for a response.

This study supports the opposite notion: That fostering a sense of good feeling and common humanity with an individual might provoke the most giving. Taking the simple step of putting a face to the issue can win support.

Indeed, this line of research has many practical implications, write the researchers: “Charitable organizations continually face the pressing question of whether and how to depict their charges, and knowledge of neurobehavioral mechanisms that promote giving enhance their strategies.” Studies like this one may help charities design appeals “that more effectively promote philanthropic behavior.”

But there are also implications for us as individuals: If we’re aware of these natural tendencies, then we can become more aware of attempts to manipulate our sympathies. As the researchers sum up their results: “Donation scenarios provide a unique yet ubiquitous example of how individuals choose to balance interest in the self versus others—even those whom they may never meet or know.”