Music is a ubiquitous part of the human experience. Scientists have found evidence that we are wired to enjoy music and to bond with each other through music, which is perhaps why we turn to music for marking important ceremonies in our lives—everything from graduations to weddings to the Super Bowl.

But, even though music may be ubiquitous, scientists have been unable to figure out how exactly our brains recognize or process music. Instead, studies have shown conflicting patterns of neural activity in response to music, sometimes affecting several brain regions at once, leaving many scientists scratching their heads over how music is distinguished from other sounds at all.

But now a new study published in Neuron suggests that human brains don’t just recognize music—our evolution has actually produced a dedicated neural circuit for it.

Our brains on music 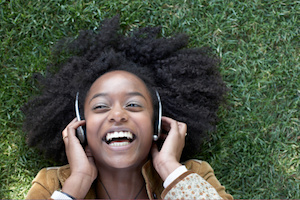 Researchers at MIT conducted the study in which ten participants listened to 165 different sounds—some music, some not—while having the auditory cortex in their brains monitored using fMRI technology. The researchers then aggregated results from the large number of trials and analyzed the activation patterns mathematically, looking for overlaps.

Without having a hypothesis in mind, they discovered six distinct neural clusters in the auditory cortex that were responsive to sound. Four of these lit up in response to standard acoustic features, such as pitch and modulation, and one responded specifically to speech. The sixth center, located just outside the primary auditory cortex, lit up exclusively for music—a finding that amazed the researchers.

“Our data analysis essentially searched through a huge space of possible patterns of response—we could have found anything!” says Nancy Kanwisher, who worked on the study. “So the fact that, from this enormous space, one of the results would be so clear and understandable was surprising and thrilling.”

Sam Norman-Haignere, a post-doctoral student at MIT and lead author of the study, said he’d run several earlier studies looking for a brain region that responded just to music; but prior methods had failed him, just like they had other researchers. Only by aggregating responses from many thousands of neurons could he delineate the underlying circuit, he explains, because raw data from fMRI readings alone tend to blur neural signals, making it harder to pinpoint centers of activity.

“If you only look at the raw data, you don’t find clear evidence for music selectivity,” he says.

The music circuit they found lit up for all kinds of musical genres—“Pop songs, blues, bluegrass, the sound of a single cello, and even rap,” says Norman-Haignere.

To further tease out its responsiveness, he and Kanwisher also analyzed responses in the auditory cortex to “scrambled” music—music that had been cut and pasted together so it no longer had musical integrity but still contained the same musical sounds. When played for participants, the music-selective circuit showed weaker activation than it did for regular music, suggesting that our brains are pretty sophisticated when it comes to delineating music from other sounds.

Because of its location outside of the primary auditory cortex, Norman-Haignere thinks the music circuit has an intermediary purpose: to interpret raw sound as music and perhaps to pass that information along to other neural systems in the brain. He also suggests that it’s unlikely the auditory cortex is the only neural body devoted to music interpretation.

“It’s probable that more explicit, higher-order knowledge of music is covered in a different brain region than the neural population that we reported on,” he says. “There might even be other music-selective populations outside of the auditory cortex.”

Though there’s much to learn about the significance of this dedicated music circuit, one thing’s for sure, says Kanwisher: All cultures have music even if we don’t know why. So, while some researchers think music has no adaptive value and may have been simply a by-product of other mental abilities, like speech, that’s no longer a valid assumption.

Instead, our brains are specifically attuned to music over other environmental sounds, much like they’re attuned to speech. Perhaps music has a similar evolutionary purpose or is somehow important for our survival, though neither researcher cares to speculate on this.

“Music is sufficiently important to the brain to devote a population of neurons; but what that says about the broader cultural significance of music is harder to say,” says Norman-Haignere.

Instead, the researchers want to stress the importance of their finding for spurring future research. Kanwisher thinks researchers should study how this brain region develops in childhood and whether it functions differently for musicians. Norman-Haignere wants to study how culture, personal experiences, and different types of music affect activity in the brain region. To him, these are the essential questions that really get at our fascination for music and for the role it plays in our lives.

“All we showed was that there was this neural population that responded highly to musical sounds and lower to non-musical sounds; but that doesn’t tell you much,” he says.

“You want to know what is it about bluegrass music that makes it sound like bluegrass? We think that finding this neural population will help us to answer that question going forward.”