Despite our reputation as selfish creatures, human beings are also capable of apparently altruistic acts. The reasons for our altruism have long puzzled researchers, but a study out today suggests a simple explanation: Each altruist act is a choice just like any other, with pros, cons, and even the occasional mistake. 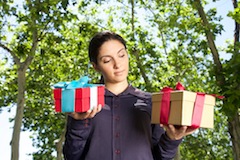 Scholars, armchair philosophers, and pop-culture icons alike have long wondered what drives selfless acts. Maybe random acts of kindness make us feel good, and altruism is really greediness in another form. Maybe we help strangers out of fear of reprisals for inaction. The more cynical among us may believe altruists are suckers and nothing more. Altruism remains a controversial subject, spawning countless academic articles drawing on evolutionary theory, social norms, notions of reciprocity and fairness, and more.

Psychologists know decisions are always a little bit random; that is, the researchers reasoned, some generous acts are likely to be mistakes.

But perhaps it’s simpler than all that, economists Cendri Hutcherson, Benjamin Bushong, and Antonio Rangel argue in the journal Neuron. Perhaps we choose to be altruistic in much the same way we choose between different vacation spots or brands of peanut butter.

But if altruism is a choice like any other, Hutcherson, Bushong, and Rangel reasoned, there will be measurable consequences they could test in the lab. First, previous research shows the brain takes time to weigh pros and cons, including biases. Therefore, the team predicted, it should take more time on average to make a generous choice than a selfless one, simply because it takes more time to overcome our egoistic biases. Second, psychologists know decisions are always a little bit random; that is, the researchers reasoned, some generous acts are likely to be mistakes.

To test those predictions and a few others, the economists recruited 122 men to come to their lab in pairs. One man sat in a waiting room while the other chose how to split $100—real money—with the first fellow. There were just two options, a 50-50 split or a randomly chosen split that might favor the guy in the waiting room. Each of the active participants made the choice 180 times, each time with a new alternative split.

Generous choices, the team found, took more time to make than selfish ones, especially for those who made more selfish choices overall, consistent with their decision-making model. Likewise, about half of the generous choices participants made appeared to be mistakes. (That conclusion took more work, however. First, the team used a standard psychological model of decision making to estimate how each participant balanced his and his partner’s interests. That in turn revealed whether any particular choice was a mistake—if a selfless person chose to keep $99 and give his partner $1, for example, that was most likely a mistake.)

The study isn’t likely to close the books on altruism’s origins—for one thing, the researchers don’t show why we would be intentionally generous, only that we sometimes are—but it does suggest that choosing to be generous could be simpler than we thought.