Yesterday, a friend asked me if she could borrow my car to run a long-distance errand because my little car gets better mileage than her big one. I wanted to say no; switching cars on an already busy day felt like a hassle to me. But I didn’t say no. Instead, I hemmed and hawed and hesitated, hoping she’d get the hint.

It can be really hard to say no. Despite my best attempts not to care what other people think of me, I still find myself wanting to be liked. I don’t want people to think I’m selfish. More than that, I don’t want to be selfish. And I never want to miss easy opportunities to help someone out. 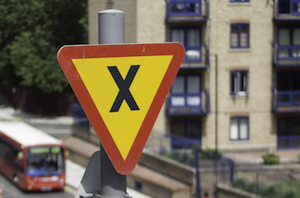 But we human beings will often choose what is most satisfying in the present rather than what will make us happiest in the future—and pleasing others (and thinking of ourselves as generous) by saying yes tends to be far more pleasant in the present than saying no. But saying yes when we want to say no tends to bite us later, in the form of resentment and exhaustion.

We can make better decisions by picturing ourselves moments before the event in question. Would we be relieved if it were canceled? If so, we’ve got to say no now so that we don’t find ourselves trying to weasel out of it later. Here’s how.

When we are stressed and tired, we tend to act habitually. Knowing this, we can train our brain to habitually say no rather than yes to requests by rehearsing a go-to response when people ask us for favors. Research shows that when we make a specific plan before we are confronted with a request, we are far more likely later to act in a way that’s consistent with our original intentions.

Something simple—like, “That doesn’t work for me this time”—is almost always sufficient. (See this article for 21 more ways to say no.) Pick a default way to respond when you don’t want to do something, and practice saying it before you need it.

2. Be clear about your priorities and truthful in your refusal

Saying no is easier when we’re clear about our priorities; it’s even harder to decline a request when our reasons for doing so seem unimportant.

I could see that if I had to switch cars with my friend it was going to screw up my whole morning, and it would mean that while I could make it to my meeting in time, I would not be able to take the dog for a morning walk. “I won’t be able to walk the dog,” would have felt like a weak explanation. But walking the dog is my favorite part of my morning, and I count on it to get centered for the day. So, it was also true for me to say, “I have plans in the morning which would make it hard for me to switch cars with you tomorrow.”

“Saying yes when we want to say no tends to bite us later, in the form of resentment and exhaustion”

Note that even though I was being vague about my plans, I was telling the truth. Untrue excuses and white lies lead to further entanglements and greater stress. Lying sends your unconscious the message that there’s something wrong with saying no—but there’s not.

Be honest, but don’t be afraid to be vague. Telling the truth is not the same as sharing more details than are necessary, even if someone asks why you can’t help them out or come to their party. Detailed explanations imply that the other person can’t handle a simple no—and they often lead to people solving your conflicts for you, when you don’t really want them to.

If your “no” isn’t accepted with grace, persist. Repeat your point calmly, using the same words. This will help the other person see that you are sticking to your no, and that their pestering isn’t changing your answer. If that doesn’t work and you need something else to say, express empathy. For example, say, “I understand that you are in a tough spot here,” or, “I know this is hard for you to accept.”

If they still won’t back down, tell them the truth about how you are feeling. For example: “I feel uncomfortable and a little angry when you continue to ask me even though I’ve declined.” Focus on your emotions—how their refusal to accept your honest answer is making you feel—and not the logistical details or logic for your refusal.

Harvard psychologist Dan Gilbert has famously shown that when we can change our mind, we tend to be a lot less happy with our decisions. So, once we decline an invitation, we need to make an effort to focus on the good that will come from saying no, not the regret or guilt we might feel. Perhaps we will be better rested because we didn’t go to a party, or we’ll feel less resentful because we let someone else help out. Maybe saying no to one thing frees up time for another (more joyful) activity.

Say you are thinking of missing your monthly book club because you aren’t interested in the book. Send your RSVP as a definitive no, not a “maybe.” And then immediately turn your attention to all the time you just freed up for yourself.  What do you get to do now instead?

This strategy can be a great tool for offsetting the fear of missing out. The brain reacts to potentially missing out on something in the same way it would to an actual loss. By focusing on what we gain by saying no, we keep our brain from perceiving loss.

If you are feeling nervous about saying no, take a moment to call up the respect for yourself that you’d like others to feel for you. It takes courage to consider your own needs and priorities along with the needs of others. But it’s worth it. In the long run, the ability to say no is a little-known key to happiness.

Need more help saying no? I hope you’ll join my Brave Over Perfect Coaching group, where we practice the skills we need to say “no” strategically, so that we can say “yes” with joy and abandon. Learn more here.